Van Helsing – Not much blood in the veins

I enjoy a good horror movie.  Not the “slasher” movies that are filled with unmitigated blood and gore, but rather the classic-style movies involving a scary monster or some hideous creature.  These films arouse in me a sense of terror and impending doom, making for an entertaining, albeit frightening movie experience.  As such, I am always intrigued by board games that utilize a horror theme.  Sadly, most of these fail to evoke anywhere near the same feelings or atmosphere.  There are a precious few exceptions, but I’m still searching for the definitive horror game.

Van Helsing from designer Frederic Moyersoen (Nuns on the Run) immediately caught my attention for two reasons.  One, I am a sucker (heh, heh) for a good vampire movie or game.  Second, I thoroughly enjoyed the campy, yet highly entertaining Van Helsing film starring Hugh Jackson and the gorgeous Kate Beckinsale.  My hope was the game would capture the foreboding atmosphere of the former and/or the fun excitement of the latter.  Sadly, it does neither.

What we have in Van Helsingis a retreading of a familiar and tired theme of hunting Dracula.  Most players represent four main characters from the classic Bram Stoker novel, working as a team to pursue Dracula in his own castle and ultimately destroy either him or his harem of ghostly brides.  To accomplish this task, they must search the various rooms of the multi-level castle, hoping to find useful weapons and tools. One player assumes the role of Dracula, whose goal is to destroy or convert the hunters into loyal minions. 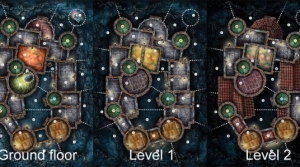 The confusing, dark and terribly small board depicts the three levels of Dracula’s castle, with each room and corridor numbered for movement purposes.  Most rooms receive inverted counters, which when revealed can be useful items for either the hunters or Dracula himself.  Mixed amongst these counters are Dracula’s eight brides.  Even Dracula doesn’t know the location of his wayward mistresses or the items that will prove useful to him. While this helps in the game play, it makes no logical sense.  Clearly Dracula is a terribly forgetful housekeeper whose memory simply isn’t what it used to be.

Players each receive a character board listing their identity and providing space for their blood points and items collected.  Sadly, there is absolutely nothing unique about each character.  Granting each character a special ability or power would have at least help distinguish them.  They could just have easily been named Thing 1, Thing 2, Thing 3 and Thing 4.  Characters split an initial collection of six objects, but again, there is no incentive to give certain characters specific items as none have unique abilities.  Sad.

Dracula begins each turn by secretly plotting his movement, marking his final location on a small pad.  Unless he searches for an item or crosses the sometimes confusing line-of-sight of a hunter, his location is kept secret.  If any brides have been revealed, they also move at this time, but may only move one space per turn.  Apparently they lack the nimbleness or stamina of the Count.  If they are located in the same room as Dracula, they may move with him as he moves.  After Dracula completes his actions, the hunters now execute theirs.

Both Dracula and the hunters have as many action points as they have blood points.  Dracula initially has five blood points, while the hunters each have four.  These will diminish as damage is suffered.  Action points may be split amongst movement, searching for items, using objects and/or attacking.  Moving is from room-to-room, with hunters being blocked by locked doors until they successfully locate the keys.  In a horrible design flaw, locked doors are marked with wooden cubes.  Sadly, the board graphics are WAY too small, and the cubes occupy most of the space, obscuring other relevant board features.

Characters may stop in a room and search for hidden items.  The counter is revealed, and the player may opt to take it if he can use it (hunters cannot take items reserved for Dracula, and vice versa) and carry it (characters can only carry a number of items equal to their current blood point level.)  If one of Dracula’s brides is revealed, the counter is replaced with a corresponding figure.  Players can win by eliminating five brides, so finding them is a major goal.  Of course, if the player is unarmed, finding a blood-starved vixen can be dangerous.

There are a variety of objects that can be found and used.  Some are weapons, and are useful in combat against Dracula and his brides.  In a radical departure from traditional vampire lore, Dracula and his brides can be harmed and even killed by standard weapons – knives, guns, etc.  Other items include health kits, keys, maps ladders, garlic and more.  All of these are beneficial to the hunters.  Dracula is more interested in goblets of blood, bats and, of course, his brides. 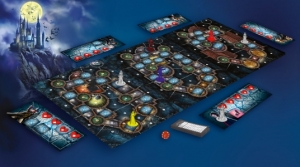 When Dracula and/or his brides and a hunter meet, combat will ensue.  A hunter must have a weapon to attack and must roll equal to or less than the number listed on the weapon counter.  Most weapons cause one point of damage, enough to kill a bride.  The dreaded stake causes two points of damage.  Dracula begins the game with five blood points, so it can take some time to destroy the vile creature.  Of course, Dracula can and usually will strike back, using either his claws or teeth.  When attacking with his claws, Dracula must roll equal to or less than his current blood points.  Biting is more difficult, but more damaging.  When biting, Dracula or his bride must roll greater than his / her target’s blood points.  So, the stronger the hunter, the more difficult he is to bite.  However, if the vampire strikes vein, the hunter suffers two points of damage. Further, if the hunter’s blood points are depleted by a bite, he instantly becomes a vampire doing the bidding of Dracula.  All is not lost for the new minion, however, as there are blood transfusion kits that can be used in an attempt to bring the hunter back from the dark side.  How convenient to have those lying around the castle!

The hunters have two paths to victory:  slay Dracula or five of his brides. Dracula wins by escorting four of his brides to his coffin or by killing or turning all of the hunters.  It generally takes about an hour or so for one of these events to occur.

Van Helsing is a disappointment.  First, there really isn’t anything new here.  It has many similarities to “dungeon crawl” games and other search-and-destroy games.  Search a castle or dungeon, find useful items, and try to slay the monsters.  Roll dice when attacking, inflict damage, and repair damage using useful items.  Each time I played I had the feeling that I’ve played this game dozens of times in the past.  Same old, same old.

Further, the game is extremely basic, which I’m sure was the designer’s intent.  While this makes it more accessible to families and non-gamers, it has unfortunately resulted in a game drained of excitement or life.  Characters have no special or unique powers and thus no flavor.  There are no action cards or real surprises.  Everything simply plods along in a dull, familiar fashion.

I am also bothered by the liberties the designer has taken with vampire lore, as well as the logical lapses.  As mentioned earlier, vampires are not damaged by traditional weapons.  Here, a gun, knife or crossbow can not only damage but even kill the blood-suckers.  Further, why would Dracula leave potentially deadly items scattered about his castle?  Why doesn’t he know the whereabouts of his brides?  I’m fairly certain that these departures from traditional vampire lore were done to help make the game work, but for me they detract from the authenticity of the experience.

Lest I sound too harsh, Van Helsing would likely make a fine family game.  The game is reasonably easy to learn, in spite of the unnecessarily brief and vague rules.  Its simplicity makes it easy for folks to understand, and it can likely be played with competence by even young children.  Perhaps families are the target market, as the game is too simple and basic for game hobbyists.  Horror fans – particularly those intrigued by Dracula and vampire lore – will be doubly disappointed.  The game fails to evoke much of the foreboding atmosphere that permeates the various novels and films that focused on the genre.  That is truly a shame and a huge letdown.  My search for the definitive horror game continues …

Greg Schloesser is the founder of the Westbank Gamers and co-founder of the East Tennessee Gamers. He is also a prolific reviewer of games and a regular contributor to numerous gaming publications and websites, including Counter, Knucklebones, Boardgame News, Boardgame Geek, Gamers Alliance and many others. Greg has been a gaming enthusiast his entire life, growing up in our hobby mainly on the war game side. His foray onto the internet exposed him to the wonderful world of German and European games and now nearly all of his gaming time is devoted to this area of our hobby. He travels to several gaming conventions each year and is the co-founder of Gulf Games, a regional gaming get-together held in the Southern USA. Greg was born in 1961 and lived his entire life in New Orleans before moving to East Tennessee in 2005. He is married and has one daughter (now married.)
View all posts by gschloesser →
This entry was posted in Reviews. Bookmark the permalink.

19 Responses to Van Helsing – Not much blood in the veins

Leave a Reply to Ryan B. Cancel reply