Review of What’s My Word?

[Note: This review was originally posted on Boardgamenews.com in late 2010.  The review has been revised a bit after a few more plays of the game.]

What’s My Word? is one of the Spiel 2010 releases from Gryphon Games. It is a reprint of a great old word game, My Word – originally published in 1972 from Gamut of Games. Joli Quentin Kansil has always been one of my favorite game designers, crafting fantastic word games such as Montage and Knock-on-Word. He has also designed a few games which are new takes on traditional card games with my favorites being Bridgette (a two-player version of Contract Bridge) and Indochine 2000 (a very nicely produced all-wood solitaire variant).

I used to own a copy of My Word, but it was lost a few years back in the great basement flood. While I don’t have the original version to compare to any more, I believe that this reprint is true to the original with no rules changes. However, there have been some changes to the components that makes the game a bit easier and better to play than the original version from 1972.

First, let me explain the game. The goal in What’s My Word? is to guess your opponent’s “gameword” in each of the two rounds. The first round has you and your opponent choosing six-letter words, and you will choose seven-letter words in the second round. In each round, once the players have chosen their gameword, then it’s time to try to guess the other’s word. You will use a Mastermind-like system to deduce the gameword that your opponent has chosen.

To do this, you use the chart on the specialized score sheet. The sheet directs you to come up with “guesswords”, initially as short as two-letter words but gradually growing until you get to a six-letter word. These words are located at different letter locations in the gameword. For example, the first guessword is a 2-letter word which is placed under the first two letters in the gameword. Two guesswords later, you will choose a 3-letter word which is placed in columns 2, 3, and 4. The columns which are occupied by your guessword are important for scoring as this will help you deduce the gameword.

Each time that you guess, your opponent replies only with a score. You get 250 points for each letter in your guessword is in the gameword BUT not in the right position. Again, the position of the letters is determined by the chart on the scoring sheet. You get 1,000 points for each letter in your guessword that is in the correct position. There is a somewhat handy chart on the left of the scoresheet which allows you to try to keep track of the letters that you know in your opponent’s gameword. After you have made your guess, then your opponent gets to make his guess at your gameword, and you in turn reply with the appropriate score to him.

This continues on down the score sheet until you reach the final word, which is the only guessword of the same length as the gameword. There is a special scoring rule here – if you are able to correctly guess your opponent’s gameword, you score an extra 3,000 points (so, 9,000 points total for the six-letter word and 10,000 points for the seven-letter word as you still score 1,000 points for each letter in the correct position).

Look at this example round to see the scoring chart as well as an example of the scoring in action.  [pic courtesy of Nathan Morse] 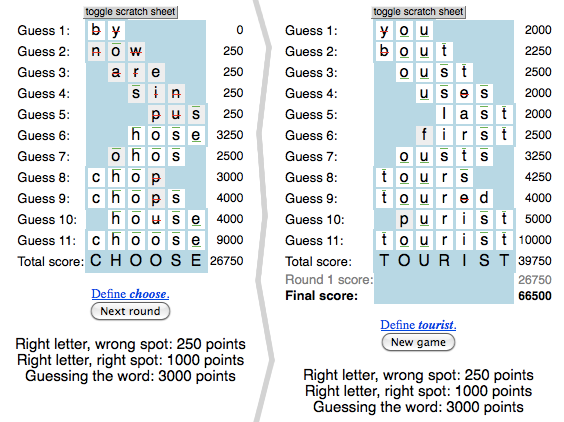 After the first round is complete, you tally up the scores from the round and then move onto the next round. This time, you choose a 7-letter word as your “gameword” and then repeat the process of making guesswords and receiving scores according to the letters in that word. The overall pattern of the location of the guesswords is the same in the second round but each of the guesswords is one letter longer – you start with a 3-letter word and move up until the final 7-letter guessword.

So what’s new about this version? Well, first – and perhaps, most importantly – it is available to be bought. The original My Word could pretty much only be found in thrift shops as far as I could tell – and yes, while I suppose that you could fashion your own version of the game by copying the score sheet… but I much prefer the professionally produced version – not only because it looks nice but also because it helps the designer and publisher continue making great games. There are 40 sheets in each of the scoring pads, so you’ll get plenty of opportunity to play the game before you need to get more scoring sheets!

The new version from FRED comes with two sturdy folders that hold the scoresheets. They are easy to write on, and help you keep track of your information without letting you opponent see what you’re writing. It is also helpful to have the flaps at the top which obscure your chosen gameword even if you somehow drop the folder by accident. I also like the fact that the two grids have been separated onto two separate pads. In the original version, both grids were side-by-side on a single sheet, and it was a bit cramped for me. As you can see in the pictures below, the newer version of the folder also is a bit more sturdy than the original.

To me, there are two big challenges in the game. First is coming up with a good gameword of your own to stump your opponent. Obviously, you’d like to choose a word that your opponent cannot deduce early on in the game – for if he does, he will be able to score lots and lots of points by racking up the 1,000 letters in his guesswords. The rules also suggest that you avoid gamewords that have a lot of interior words – such as STARTS – which has STAR, TAR, ART, ARTS, TART, TARTS, and START within it as this can lead to a lot of high-scoring possibilities for your opponent.

After three games, I’m not sure if I have a good plan. Sometimes choosing off-the-wall words like ZIGZAG or QUINCE have worked. I’ve also managed to confuse my opponent using a word which has a lot of other words only one-letter away – and in doing this, managed to make my opponent miss the 3,000 point bonus at the end of a round – I used BUMBLE – which had JUMBLE, FUMBLE, HUMBLE, and RUMBLE going for it – and that missed 3,000 point bonus was enough for me to sneak out a win.

If you want to learn a bit more about how the game works, you can also try this sweet online version of the game coded by my good friend Nathan Morse. It is only a solo-version of the game, using words taken from some sort of Linux dictionary. It’s quick to play, and as an added bonus, it works on my smartphone – so I can pretty much get a game in whenever I’m bored!

What’s My Word? is a clever pencil-and-paper game which has been nicely produced by Gryphon. It’s small size makes it perfect for travel. While it doesn’t require the same mental inventiveness as Montage or Knock-on-Word, it’s still a great game for word buffs.  I like it!

Until your next appointment,
The Gaming Doctor

Greg J. Schloesser: Marry a word game and a deduction game and the result is What’s My Word?, a clever and challenging two-player game from Joli Quentin Kansil.  Originally released as My Word in 1972 by Gamut of Games, the game has been given new life by Gryphon Games. One wonders why it has been out of print for so long, as the game truly is one of the best word games ever designed.

In spite of its simplicity, this is one tough game.  Tough, that is, to play well.  Attempting to guess your opponent’s word is quite challenging, especially when you don’t know exactly where the letters are aligning.  When your opponent announces your points, you must deduce whether you have letters in the correct place or not.  For example, if your opponent says you have scored 1000 points, do you have one letter in the correct place, or four letters not in the correct locations?  The challenge is to formulate words that will reveal correct letters, narrow the possible locations, and eventually deduce the secret word.  This is a daunting task, one in which word lovers will revel.

Some have compared the game to Mastermind with words.  Such a description is quite accurate.  To play well, players must have an extensive vocabulary, keen deduction skills, and exercise creativity in formulating words.  Crossword puzzle aficionados, vocabulary buffs and puzzle fans will likely be enamored by and excel at What’s My Word?  Common folk – such as me – will likely find the game frustrating, particularly if one’s opponent falls into one of the categories listed above.  My wife is a dedicated crossword puzzle solver, and she adores the game, taking great delight in running roughshod over me whenever we play.  In spite of my poor performance, however, I readily recognize the brilliance of the game’s design.  It is a fantastic game to play with your spouse or friends, and a great one to carry along with you on a vacation or getaway.  I am thrilled that the game has once again been made available.  It deserves to be in constant print and become a staple in every household.

Valerie Putman’s opinion: I like word games okay, but I love deduction games. This had a very fun puzzle-solving feel like many good deduction games. I was unaware of the game until this reprint came out, so I’m glad it was remade! The only issue I had was that I was torn between taking as long as I felt like I needed on a turn to make the best possible guess and pressure (self-inflicted) to keep the game moving and just make a guess. I can definitely see a problem if the two players don’t agree on the acceptable level of analysis paralysis.

Ratings Review from the Opinionated Gamers:

I love it! Valerie Putman, Craig Massey
I like it. Dale Yu, Greg Schloesser
Neutral Luke Hedgren
Not for me…

5 Responses to Review of What’s My Word?