Let others worship at the feet of Dr. Knizia or fawn over the multi-layered creations from the mind of Martin Wallace… instead, let me have a wonderful day filled with games from the genius that is Heinz Meister.

“Heinz WHO?,” you ask, wondering if I’m just longing for extra ketchup for my french fries. Ah, gentle reader, you have simply missed out on one of the more prolific & successful game designers of the last 20 years. And Inspector Rabbit is the newest addition to his rather large body of work.

In fact, chances are pretty good that you’ve played one (or more!) of his games without realizing it:

You’re less likely to have played some of my favorites from (insert your own Meister/Master/Maestro pun here):

So, with that glowing introduction for the designer, let’s get on to the actual review… yes, yes, I promise to actually review the game once I quit bowing & scraping.

Ahem… well, Inspector Rabbit is a push-your-luck game cleverly disguised as a memory game. This Kinderspiel des Jahres recommended game (last year) borrows the dice mechanism from Herr Meister’s classic adult game, Nur Peanuts (whose title colloquially translates as “Chump Change” and whose gameplay I’ve previously described as “Monopoly boiled down to dice & cash”) and combines it with a relatively simply memory challenge to make for a fast-playing exercise in luck management. 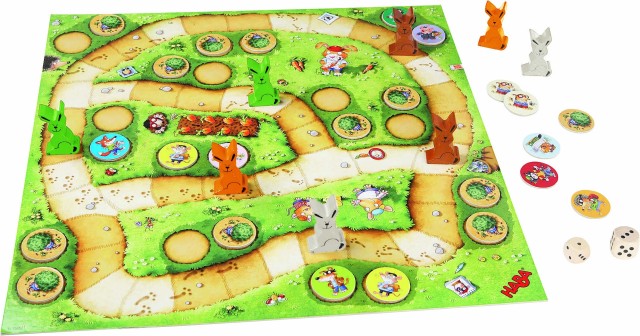 Seems that the Rabbit Police Force has leads on the hiding places of a number of wanted criminals… and it’s time to go out & arrest the bad guys. (Seriously, the Frog has a gun, as does the Chicken. It’s a time of extreme lawlessness.) Weirdly enough, all of the criminals are twins – really! – and therefore you must arrest both of the offenders in order to bring them to justice.

So, pairs of rabbit detective teams head into the garden, searching for the various animals on the lam. Each turn, a player has the option of rolling:

…and then moving one of his rabbit officers the full amount. (You may name your team anything you like: Jon & Ponch, Starsky & Hutch, Cagney & Lacey… I prefer Lenny & Rey, in honor of my favorite Law & Order detective team.) If a rabbit lands on a hiding place, he gets to flip over both of the animals hidden behind the bush.

In subsequent turns, the player must maneuver his other rabbit into position so that they both have cornered matching suspects – and then the player may claim the criminals & send them off to Animal Jail. (Or Rikers… why, yes, I’ve been watching a lot of reruns lately.)

If there are no rabbits left on a hiding place, the two criminal tokens are turned face down… and that’s the entire memory element of the game. It’s thankfully not too taxing for parents & other adults.

There’s one more wrinkle – if a rabbit lands directly on another rabbit, they can relocate them to any empty space on the board.

When one rabbit team has bagged 4 pairs of law-breakers (3 pairs in a four player game), they win.

Some thoughts on the game:

My six year old had a hard time with this game the first couple of times we played – it took him a bit to get the hang of choosing the dice he needed to get where he wanted to go. As well, he was really bothered by someone landing on & moving his rabbit. He’s getting better with both of those issues & really enjoyed our last playing.

The artwork is very cute – though if you’re bothered by adorable animals as criminals, this may not be the game for you. I think that the artwork helps sell the game… though I wonder if it doesn’t mislead buyers into thinking this game plays best at the younger end of the age range (ages 6-7). I actually think it works better with 9-10 year olds.

I haven’t had the opportunity to try it with gamers – it would be a light filler but still a nice bit of fun. Where I think Inspector Rabbit will be best, however, is a family game that comfortably allows kids & parents to play together.

follower of Jesus, husband, father, pastor, boardgamer, writer, Legomaniac, Disneyphile, voted most likely to have the same Christmas wish list at age 44 as he did at age 14
View all posts by Mark "Fluff Daddy" Jackson →
This entry was posted in Reviews and tagged Haba. Bookmark the permalink.