In Guildhall, players strive to collect complete sets of guild cards (matching guild cards in each of the six colors.)  Players may then “cash in” their completed set for victory points and a special action.   First player to gain 20 or more victory points wins.  What may seem to be a simple set collection game turns into an interesting tactical game as every guild card played grants a special bonus.  This bonus is increased in power for each previous guild card of that type that has been played.  Since you play up to two cards per turn (which must be from different guilds), this allows for very creative moves to appear throughout the game.  While I like the game on paper, several guild cards allow other players to steal out of partially collected sets, making the game too direct conflict oriented for my own taste.

Players start the game with 9 cards and then “seed” their guildhall (card collection/storage area) with three cards of their choice.  Cards in one’s guildhall are sorted by guild.  A stack of cards of of the same guild is called a chapter.  Play then progresses around the table with each player able to take two actions on their turn.  The most common action is simply to play a card from one’s hand and perform any bonus abilities it grants.  Thus two cards can be played per turn, but players may not play the same type of guild card twice in one turn (nor can they ever play the exact card – color and guild – already found in their guildhall.)  As one action, a player may instead use a completed guild set (one card of each of the 5 colors, all the same guild, called a completed chapter) and trade it in for a point card (worth points and grants a one-use action with more powerful actions worth fewer points.)  Since victory point cards are worth 2 to 7 points, completing sets and cashing them in is the primary way to gain points in the game.  The third action option on one’s turn is to discard any number of cards from one’s hand and then draw back up to 6.  This is an interesting mechanic because there is  no default card draw in a player’s turn.  If a player wants more cards they must sacrifice an action (or use a card’s special ability.)  At the end of one’s turn, any cards played are moved into their guildhall (unless, by some crazy move, a player manages to already have an exact duplicate card in the guildhall when its time to move in played cards.)  Thus, without any bonus abilities, players are able to add two new cards (of different guilds) into their guildhall per turn.

The six professions add nice variety to the game and provide several promising strategic avenues to explore.  Remember, that all cards of a guild are equivalent, but become more powerful depending on how many cards of that guild are already collected in a player’s guildhall.  Assassin cards are direct attacks on other players, simply eliminating cards from other players’ guildhalls with more powerful assassins simply eliminating more cards.  Farmer cards grant a player either 1 or 2 victory point tokens (which cannot be taken away) depending on their power.  Historians take cards (fewer or more) out of the communal discard pile and place them directly into one’s guildhall.  Traders are able to swap cards between one’s own and another player’s guild hall.  A maxxed out Trader can swap an entire chapter with another player.  Dancers allow you to draw cards based on how many dancers you already own, and grant you the ability to take a third action on your turn!  (You typically won’t get more than 3 actions since you can’t play more than one card of the same guild in a turn.)  Finally, there is the Weaver which lets you trade cards between your hand and your own personal guildhall (with more powerful actions allowing more cards traded.)  In general, the trading of cards between one’s guildhall and hand or other players’ guildhalls can be quite powerful, but since it is always a trade (and not a steal) AND the rule against exact duplicates must be preserved, the perfect trade may sometimes be harder to pull off than you think 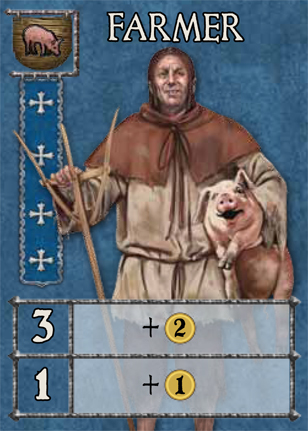 Two of the six professions directly mess with other player’s guildhalls, and about a third of the victory point card actions also allow stealing or trading from other player’s guildhalls.  This makes for a very dynamic game.  And by dynamic, I mean it can be quite an aggressive game, too aggressive for me.   While most of the card powers are based around building up one’s sets (and therefore power), the few that knock down what others have built up can be quite painful to experience.  As any set-collector gamer knows, it’s the last card of a set that is hardest to find.  It seems too easy (not much of a sacrifice) for one player to prevent others from building up to a full set of five.  This is compounded by the no duplicate guild rule since that means, aside from clever play, a player typically has to spend an entire round with a stack at a vulnerable level of 4 cards.

I really wanted to like this game.  It plays reasonably fast, has interesting card-combinations that can occur within the game to give it a nice tactical feel.  However, the game (at least in our group) has some serious pick-on-the-leader issues.  After a play or two, it became difficult to build up a complete guild set.  Once one put together a set of four guild cards, you were instantly a target for all the other players to keep you from getting that fifth.  Thus, the game deteriorated into collecting three cards in a set and trying to position oneself to go from 3 to a full set of 5 all in one turn (a set of 5 is immune to attack.)  While I can put up with some antagonistic play in my game, in more strategic games I prefer it not take such center stage.  With time, the game did improve as I developed strategies in order to make myself less of a tempting target.  This did improve the game, but turned it into less of a game I wanted to play.  Guildhall is a pretty solid game, has some interesting play experiences, but just misses out on an “I like it.” rating. .

Jonathan F.: Guildhall is an extremely elegant game.  There are 120 cards, but in reality, there are just four copies of six action cards in each of five colors.  As a design, I cannot help but admire Guildhall.  It is like a tent from Harry Potter that looks modest from the outside and palatial from the inside.  Even more astounding, there will be an expansion with six new card types that you can mix and match with the base set.  I am excited about the expansion because I am not that keen on the assassin, the trader, or the scoring markers for 2VPs that permit you to steal a stack from someone else.  As it is, the game has too much direct aggression for it to be a love it for me, but I sure wish I had designed it.

Craig M.:  This is a game that does a lot with a little.  The game felt intuitive and streamlined and presents some pretty tough choices.  I can see a scope for aggressive play, but I’m not sure that basing a good chunk of your strategy on messing with others’ stacks is always the best move.  With only two actions a turn, you are often giving up advancing yourself to take the next guy down.  And the games is light and quick enough that getting bent out of shape about having your farmers and historians assassinated is overreacting.  I’d be happy to play this again.

Ratings Review from the Opinionated Gamers

I love it!
I like it.  Jonathan Franklin, Craig Massey
Neutral.  Matt Carlson
Not for me…

Dad, Gamer, Science Teacher, Youth Pastor... oh and I have green hair. To see me "in action" check out Dr. Carlson's Science Theater up on Youtube...
View all posts by Matt J Carlson →
This entry was posted in Reviews. Bookmark the permalink.