As promised here I’m with some interesting news about Italian market and games.

Italian Game of the Year nominations

First of all the announcement of the 5 games nominated for the first Italian Game of the Year selection. After 20 years the Lucca Comics & Games Best of Show shut down and will be replaced by “Gioco dell’Anno” (Game of the Year).

After more than two months of playtest with several groups and an intense exchange of opinions on a reserved forum, the nine members of the jury of “Gioco dell’Anno” (Italian Game of the Year) nominated

The winner will ba announced monday 14th October after the two days of jury member meeting. 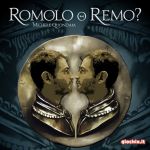 Make a picture re-creating the box cover of Romolo o Remo? and send it to Giochix.it: all pictures will be published on Giochix.it website and the most voted will gain some Giochix games! Games will be sent at your home without any cost.
In addition, all participants can come to Giochix.it stand at Essen Fair (1C123) to show their picture (printed or simply on a cellular phone or tablet). Giochx.it will reward with an official Romolo o Remo game die (until available).

All the details on the official contest page.

An interesting new from RPG Italian scene. Soon will be published the Italian edition of Savage Worlds, one of the most successful RPGs on the market. To celebrate that the Italian publisher decided to announce a contest to invent a new “savage world” in 3 pages of text. Of course the contest is for Italian manuscripts. Here all the details.

3 Days of games with more than 400 gamers attending. The first edition of the Asterion Gaming Days has been an incredible success. Here the official press-release from Astrion Press. 32 finalist for the first Italian Twilight Struggle Tournament. More than 60 participants to the other Asterion tournaments.

A demo are with more than 50 demonstrators, part from Asterion staff and part from La Tana dei Goblins, Italian greatest gamers community.

Soon with more updates from Italy

Andrea "Liga" Ligabue is a game expert contributing to many games related international projects including Gamers Alliance Report, WIN, ILSA Magazine and Boardgamenews. Member of the International Gamers Awards Committee is coordinator of Play - The Games Festival and founder of the project Ludoteca Ideale.
View all posts by Andrea "Liga" Ligabue →
This entry was posted in Commentary. Bookmark the permalink.

3 Responses to News from Italy: end of September update