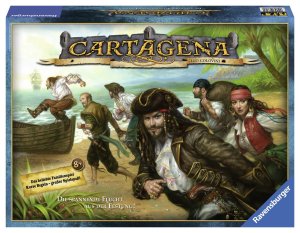 Back in 2000 (which seems like a lifetime ago in the gaming hobby) Winning Moves released Leo Colovini’s Cartagena, a race / card / board game involving the famous 1672 jail break from the supposedly impregnable fortress of Cartagena.  Players attempt to race their pirates through  the caves to reach the boat and sail away to freedom.  The first player to get all four (six in the original game) of his pirates into the boat was victorious.

After the passing of 14 years, the game has been republished–this time by Ravensburger–in an upgraded, more attractive edition.  The pirates are no longer basic wooden pawns; now they are detailed plastic miniatures.  The artwork on the cards is more detailed with the background being a faded pirate’s map.  It is also a “big box” game, which is certain to grab the attention of those browsing game shops, but it certainly takes up more room on one’s game shelf.  Game play has also undergone some changes, which I will note where appropriate below.

The board is comprised of six double-sided pieces, which can be assembled in a variety of fashions. Thus, the layout of each game will likely be different with each play. Only five are used for each game, which is one less than the original edition.  Thus, the path and the game are shorter.  Each section depicts six symbols along the jungle path (the original was a cave path), including a pistol, keys, jug, grappling hook, lantern and telescope. A deck of cards has matching symbols, 17 of each image.

Players initially begin the game with five cards (six for the start player), which is also a change from the original, wherein all players began with six cards. On a turn, a player may take up to two actions (the original granted three actions per turn), which can be either:

1) Play a card and move a pirate to the next vacant symbol on the board that matches the card played; or

2) Move a pirate backwards on the board to the next space which is occupied by one or two pirates.

As mentioned, when playing a card, the player moves a pirate ahead to the next vacant symbol that matches the card played. If there are no vacant matching symbols, the player may move a pirate all the way into the boat. This, of course, is a favorite tactic: play several cards of the same symbol and ‘leap-frog’ your pirates ahead on the board. Of course, since you don’t know which cards your opponents possess, they can also take advantage of this maneuver.

Option 2 is the only manner in which a player can acquire new cards. If choosing this option, a  pirate must stop when it encounters a space occupied by either one or two pirates. If that space is occupied by just one pirate, the player draws one card from the deck into his hand. If it occupied by two pirates, the player draws two cards into his hand.  Falling back in this manner is necessary in order to gain new cards, so it occurs frequently throughout the game.

Believe it or not, that’s it. The rules are that simple. First player to get all four of his pirates into the boat is victorious.  There is an advanced game version that returns the game play to that of the original Winning Moves edition.  While the new rules do shorten the game somewhat, I find that providing three actions per turn gives a player more options and can allow for lengthier movement on one’s pirates.  I greatly prefer playing with this original “three actions per turn” rule.

The original version also provided rules for a more ‘strategic’ variant, known as the Tortuga version. With this version, each player’s hand of cards is face-up, so each player can study which cards his opponents have when deciding on his actions. Further, 12 cards are dealt face-up from the deck and when a player collects cards for moving his pirate backwards, he must take the cards in order from this row. A new row of 12 cards are dealt when all of the prior 12 cards are taken.  I found that the Tortuga variant added way too much down-time to the proceedings, as players tended to analyze each opponent’s hand of cards, as well as the draw cards, before making his move.  This took away one of the game’s main features:  speed of play.  This variant is absent in the new edition.

I am very happy to see Cartagena republished.  The original has remained in my collection 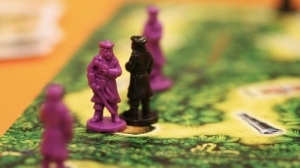 since it was first released and is one of those rare games that I tend to play a half-dozen or more times per year.  It is fast and easy to play, yet has some interesting decisions and tactics to employ.  It is popular with both gamers and family and friends.  The theme is appealing, and the hand management required is not overly taxing, making it easily accessible for just about anyone.

While I do appreciate the nice miniatures and more appealing artwork, I am not sure a big box version was necessary.  It is likely a good marketing tactic, but now it presents me with the dilemma of which edition to keep in my collection.

NOTE:  Thanks to Daniel Danzer for the use of the close-up photo.

Matt Carlson: Cartagena, or as I call it: “Advanced Pirate Candyland”, is solidly on my go-to list of games to bring out when trying to attract completely non-gamers into a game.  The “CandyLand” style movement feels familiar, yet players are now empowered to actually make decisions.  However, mind-lock is kept to a minimum since there are only a few things one can do on a turn..  Gameplay advances one’s own situation and never directly diminishes one’s opponent, avoiding most “take that” sort of feel.  I can even adjust the length of play by reducing the length of the board and/or reducing how many pawns are used in the game.  While the production values of my version isn’t “over the top”, they are fine for what they do.  Having fancier pieces might help me in enticing people into gaming, but I’m not so sure I’d want a bigger box on my shelf.  I’m giving it a “Like it”, as that’s how I personally feel about it, but I consider it an “I Love it!” when used for what it does best – introduce people to boardgaming.

Greg Schloesser is the founder of the Westbank Gamers and co-founder of the East Tennessee Gamers. He is also a prolific reviewer of games and a regular contributor to numerous gaming publications and websites, including Counter, Knucklebones, Boardgame News, Boardgame Geek, Gamers Alliance and many others. Greg has been a gaming enthusiast his entire life, growing up in our hobby mainly on the war game side. His foray onto the internet exposed him to the wonderful world of German and European games and now nearly all of his gaming time is devoted to this area of our hobby. He travels to several gaming conventions each year and is the co-founder of Gulf Games, a regional gaming get-together held in the Southern USA. Greg was born in 1961 and lived his entire life in New Orleans before moving to East Tennessee in 2005. He is married and has one daughter (now married.)
View all posts by gschloesser →
This entry was posted in Reviews and tagged Cartagena, Leo Colovini, Ravensburger, Winning Moves. Bookmark the permalink.