In Versailles, players take on the role of competing designers of the great French palace – the player who can best design and decorate the rooms in the palace will win the game.  The large board shows the area around Versailles.  The palace (yet to be built) is in the center of the board, and surrounding the building site are 7 different areas important in the construction of said palace.

Players start the game with a number of workers (5 meeples in a 4-player game) that are strewn across the board according to a chart in the rules.  On your turn, you must move one (or more) of your meeples to a new location.  In general, you are able to move one meeple one space – though you do have a supply of two “double move” tokens which allow you to either more one meeple twice OR two meeples one space each along an identical path.  If you choose to do a Double Move, you flip over one of your tokens to the exhausted side.   Whenever you move, you place your “Activation Marker” on the newly-arrived-at location.

In general, pieces can move clockwise around the board.  The exact paths that meeples are allowed to take are defined by little arrows on the board showing the direction in which you can travel along the paths.  One other rule is that you cannot end your movement in the area where you Activation Marker currently is – in other words, you cannot end movement in the same space two turns in a row.

Once your movement is complete and the activation marker has been moved to this new location, you may activate the location.  When you activate a location, you consider all the meeples of your color that are there (not just the meeples that just moved into the area).  Each location has a different action (going clockwise from the upper right corner).

Examples of the decorations

The game ends immediately when one of three criteria are met

At this point, there is a final reckoning of points –

You have scored points through the course of the game from tiles played.  To this, you add

The player with the most points wins.  There is no tiebreaker.

Versailles is a nice light game  – the majority of the game revolves around the gathering and management of resources.  But, in addition to the pure resource management, you have to figure out how to move your meeples around the board so that they are in the right place at the right time.  After two games with competition and one pseudo solo game where I just played with the pieces, there is definitely some strategy to figuring out how to work with your meeples.

One of the things to consider is how you will use your technological advances from the Alchemist’s Guild.  Of course, you could choose to ignore that location completely – but if you choose to do so, you could end up either getting free actions at locations (at which point you’d rather leave at least a meeple at each of the locations where you might get a free action) or you could get increased resources at a particular location (At which point, you’d rather try to cycle your meeples around to get to those locations.

The majority of the points are scored from playing tiles to the Construction site, and it’s important to choose tiles that you can build – both from the standpoint of matching the colors on the tile as well as from having the right resources/Decorations in order to play them.  I feel like the tiles are mostly balanced in their VP return for the costs required to place it.

One thing to watch is that the edges of the construction site actually have green and white borders – and you are supposed to match these colors when placing tiles.  We missed this for most of our first game and this kinda bolluxed up our tile placements.   In the next game, when we played it correctly – we ran into a different issue with the tiles – namely that we had four or five spaces at the end of the game that were impossible to play any tiles to – because the edges of the tiles in the interior were already at loggerheads with the colors on the lining of the Construction site.

Some of the tiles

At this point, once we realized that there were no more legal tiles to be played, the rest of that game was fairly anticlimactic as we could only race to grab tiles (worth 1VP) and Decorations (worth 3VP), and for those people who didn’t have workers in the right place, they just tried to race to move the King ahead on the track to speed up the end of the game to prevent their opponents from picking up any more VPs.

I have a minor complaint about the components – the pieces used for resources are two different sized cubes to represent 5 units (10 mm) and 1 unit (7 mm).  However, the difference in size is not great, and it is fairly easy to confuse the two sizes or accidentally pick up the incorrect size when collecting resources or making change.  While I really like the wooden components, I wish that these had either been more disparate in size or perhaps different shapes to reduce any confusion.

However, on the whole, Versailles is a good family-level game.  There is enough depth in the game to play it multiple times (I still need to figure out how to better use/move my meeples around the board after two plays), yet it was easy enough that I could teach it to my teenaged boys and one of the neighbor kids and we were all able to play it without any confusion.  I’m presumptively on a “I like it” rating, though I really think I’ll need a few more plays to solidify my thoughts on it.

Thoughts from Other Opinionated Gamers:

Jonathan F.: I really liked Versailles.  It offered enough to think about without it becoming cumbersome.  I liked the resource use, almost mancala-like, but with a nice theme and more choices.  There are three issues with the game as it is

One very important rule was not in the rulebook: When placing a tile in the center, it must match not only the sides, but also corner-to-corner “you cannot have an L where the two sides are different colors. If a green tile side makes an L with a white border, you may not place the tile there, because no possible future tile could meet both those conditions.“ 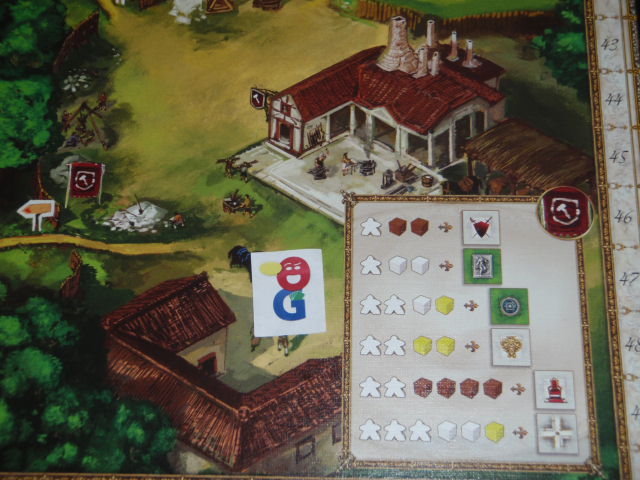 The workshop area where you buy the decorations

Third, having played it with different player numbers, the technology tracks vary in strength depending on the player number.  If you have played it enough or take a moment to think, you might look at how many players there are before starting one of the three tracks.  Andrei, any chance of a small expansion that scales the tracks for different numbers of players so they are always a tough choice?

Andrea “Liga” Ligabue: I’m getting something more than a first impression since I have played the game more than 5 times with 2,3 and 5 players. Versailles is one of the best games in this Essen and something really new in the worker placement genre. The idea that workers are moving along paths combined with the fact that the effects of activation are related to the number of workers are something really new for me. I also like the idea that you can play different strategies according to the improvements in the Alchemists Guild.

I’m not really sure the extra level of strategy/planning needed by the way the palace is actually built is something really needed but it works.

Playing Versailles I’m always involved in planning several moves ahead because you need to do that: it’s a game that amplify the importance of the strategy more than tactics.

Dale Yu is the Editor of the Opinionated Gamers. He can occasionally be found working as a volunteer administrator for BoardGameGeek, and he previously wrote for BoardGame News.
View all posts by Dale Yu →
This entry was posted in Essen 2014, First Impressions. Bookmark the permalink.