Akrotiri is one of the latest games released in the 2 player line from Z Man Games. Tile placement games always interest me so I was curious to see how Akrotiri worked.

So the basics, the box is a good size, not too much air and packed with plenty of components. The tiles, cards, and player pieces are of standard to good quality. The resources cubes seemed to have had a minor quality control issue as it appears the paint wasn’t dry when packed and many cubes were stuck together.

Akrotiri has a nice mixture of tile placement, exploration and a little pick-up and delivery. A brief summary of the game is as follows.

At the beginning of the game each player receives a secret goal card. It is possible to have up to 3 hidden goal cards by the end of the game. The goal cards give VP in relation to where a player has built temples on islands. Each player also receives two map cards to seed the board. Players try and match the symbols of terrains on the cards to where the symbols are on the developing map. This will give the player the location of an island to excavate. They may then pay to excavate temples on islands that meet the qualifications. Played map cards are also worth VP.

A player turn consists of placing a tile to the existing map. Tiles have shipping lanes, a terrain symbol which indicates a resource and 4 corners of island parts. Thera is the starting island in the center. When a tile is placed a resource matching the symbol on one of the islands is placed and a second resource is placed on a different island on the tile.

The goods are taken from the left side of the Market. When goods are brought back to Thera they are sold for the highest showing price on the farthest open space to the right. 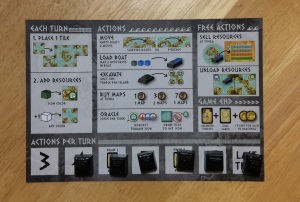 After tile placement the turn is action based. Each player starts with 3 actions and they can gain actions by excavating temples. The actions are:

The game ends when a player has excavated their 6th temple and each player has had an equal number of turns.

I find Akrotiri to be a nice relatively meaty two player game. The tile placement involves spatial awareness as you try and connect (or not depending on your goal cards) optimal shipping lanes. The map cards usually aren’t too hard to match as the rules regarding the terrain location are fairly generous. As the game goes along it is not uncommon to just buy a card and be able to play it in the same turn. The challenge of course is also placing tiles in a way to maximize your economy so you can afford to play the map cards. It’s also challenging because the islands fill up quickly with excavated temples. As far as interaction it’s mostly limited to competition for picking up resources. You don’t want to leave you opponent with a good haul.

One of the potential issues with the game is there can be some down time. I can see why they chose to limit it to two players. Also I’m not sure about the value of all the goal cards. This may be due to my relative lack of experience in the game so far but trying to set up more than one temple for the two portage cards seems extremely difficult.

Jonathan Degann: I played it once and was favorably impressed.  It packs a lot of game in a small box.  You’re growing and exploring the area, generating efficient pick up and deliver routes, and racing to control islands that work for you based on the cards you draw.  The tension and complexity of your choices grow as the board grows, giving the game a sense of scope.  This may become my second favorite two player Euro after Targi.