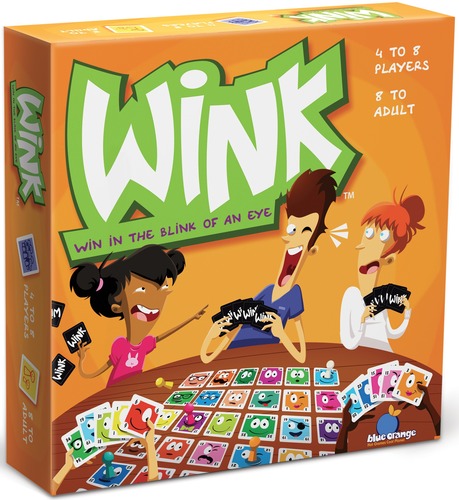 Wink is a fun light-hearted game where you try to score points by winking at your partners without getting caught.  The game is made up of 2 decks of 36 cards – one with white backs and one with black backs.  One of these is dealt out in a 6×6 array on the table.  The other is shuffled and dealt out to the players (though not all of the cards are used, there will always be a few cards that are put back in the box, sight unseen).  Each player chooses a color and gets a pawn in that color as well as a scoring card in the matching color. 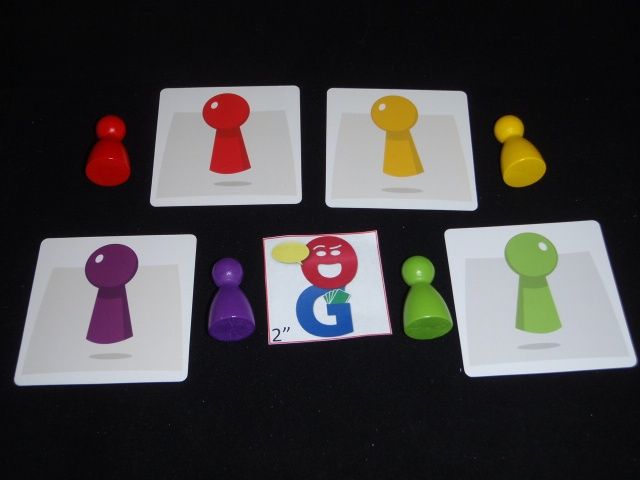 On his first turn, the active player chooses a card on the table and marks it with his pawn.  He then states out loud that he is looking for the number thus marked.  He may not choose a number card that he is currently holding in his hand.  He may also not choose a number already chosen by someone else.  At this point, the player’s turn is over – but he needs to still pay attention to the other players!  From this point UNTIL the start of his next turn, that player is trying to figure out who his partner is – that is, which player holds the card for which he is looking for.

While the game continues around the table, partners let each other know who they are by winking at each other.  For instance, if Karen has asked for the “8” card, and I am holding the “8” in my hand, I need to wink at Karen (and have her see that wink!) before the start of her next turn.  However, you must be careful when you do this!  If someone catches a signal being passed (or at least thinks they have seen a signal), they can accuse them and try to expose the partnership – more on this later.

the two different card backs and some of the faces

So, back to game play.   On every turn after the first, the active player first makes a statement/guess as to who his partner is.  He declares the name of the person he believes is holding the card that he is looking for.  If the player is correct, he takes the number card from the board (which his token was on) and places it underneath his scoring card.  Every card here at the end of the game is worth one point.  Additionally, the partner player takes the matching number card from his hand and places it underneath his scoring card.  Thus, each player in the successful partnership gets a point.

However, if the active player is wrong, and he is unable to correctly name his partner – and don’t forget that there will always be a few cards in each game which have no partner – the player removes his player token from the board and turns that table card face down so that no one else can choose it for the rest of the game.  If there was someone who had the matching card in their hand, they are not allowed to say anything and simply must hold onto this card forever – there will never be another chance for them to score that card.

But, remember that you need to be discreet when winking at people.  Each player is given 4 Accuse cards.  At any point in the game, a player can discard one to make an accusation.  He can accuse any player of holding the card which matches a request on the board.  If the accusation is correct, the accusing player scores two points – he takes both the card from the board and the matching card from the partner’s hand and places it under his scoring pile.  If he is wrong, nothing happens, but the accuser has expended one of his four possible accusations for the game.

The game continues until either one player has discarded all the cards in his hand OR when all of the cards on the table have either been matched or turned face down.  At this point, players count up the number of cards under their scoring marker, and the player with the most cards wins.

OK, I’ll admit that when I received this one in the mail, I was pretty skeptical about how it would go over with my gaming group.  I’m happy to say that my fears were unfounded.  We’ve played the game a few times now – both with my group as well as with my teenaged boys and their friends – and it’s been a hoot.  The game is fast paced, and it can actually be quite hard to get a wink in without people noticing.

This isn’t the sort of game where there is deep strategy (but that’s ok!).  You pretty much have to pick a card from the table at random, because you shouldn’t know what anyone else has, and you can’t re-choose a card that has already been chosen.  The winking bit can be quite difficult to accomplish at times, and usually results in much laughter.  But, it’s a lot of fun, especially with a table full of people.  I’d recommend playing on a round table though.  We have played on a long rectangular table, and it can be hard to discreetly look at the person directly next to you.

The art of the cards is whimsical, and very much in line with the smiling faces you see on the players playing the game.  This one is a nice light filler/closer to a game night, and something that I’ll happily bring along to play with non-gamers at parties, picnics or other light social events.

Karen Miller: (Played one time) This game is all about silly fun. Add this to the stack of games in which you can keep score and declare a winner, but that is beside the point. Just have fun and perfect your winking technique!