Review of Camel Up Supercup (An Expansion for Camel Up) 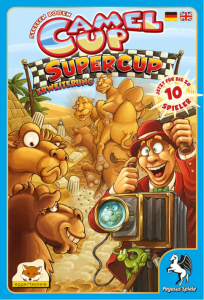 Camel Up Supercup: An Expansion in Four Modules

My family and I love Camel Up, so my interest was piqued back in January when Eric Martin revealed that eggertspiele would be releasing an expansion for the game called Camel Up Supercup.  The expansion was released in Europe last month, and a U.S. release is planned for late summer or early fall by Z-Man Games.

I have to admit a bias up front: I’m generally leery of expansions.  In my experience many expansions either (1) add complexity or clunkiness without adding much fun, or (2) are decent but aren’t worth the money.  Nonetheless, after reading a bit about Supercup I decided to risk it, knowing that I couldn’t go terribly wrong for the asking price of about €12.   (The MSRP is only €15.)  I tossed the game into a recent order from an online European retailer, and I’m glad I did.

I like Supercup, and I think it adds some nice elements to the base game without adding much complexity.  The game comes in four modules, and while I think playing all four modules at once is a bit much, I like each of the modules individually.  I’m going to provide an overview and rating for each one.

Development of the Expansion

I asked Steffen Bogen when work on the expansion started, and he told me he had ideas even before the SdJ nomination, but he and eggertspiele really hit the ground running after the nomination and win.  He said there are two types of Camel Up players: (a) probabilistic player, and (b) push-your-luck players.  He said he wanted to create an expansion for both types.  The first idea Bogen and eggertspiele had is for the photographer and camera (Module 2), but he told me his favorite is the betting partnerships (Module 4).

The first module makes use of the longer race track included in Supercup.  This longer track, when combined with a new mechanism where the camel at the back of the pack will move twice per leg, makes for a longer and more exciting race.

Supercup comes with a gameboard extension that is placed over spaces 7 to 11 of the base game’s gameboard.  This makes the race track four spaces longer.  The expansion also comes five with supporting dice, one per camel, and a pedestal to put them on.  Unlike the dice in the base game, which have black numbering, the supporting dice of Supercup are grey, so they are easily distinguished.  Lastly, since there will now be an extra movement in each leg of the race, a new pyramid tile is included, as well as a new 2-money leg betting tile for each camel. 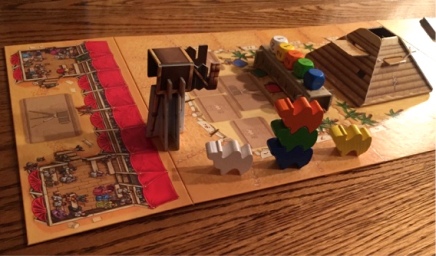 My Thoughts:  I like this module quite a bit.  Sometimes Camel Up can seem a bit too short, and this module lengthens the game, though not by much (about 10 minutes).  That said, the best part of this module is the supporting dice.  I’ve played many games of Camel Up where one camel falls irreparably far behind, and the end result is that players can predictably bet on the last place camel.  Since the joy of Camel Up is the tension created by the rapidly-shifting ranking of the camels, I think the supporting dice adds a bit of tension to the betting.

The expansion comes with a cardboard camera and a photographer tile.  This module can be played with the base game or any of the other modules. 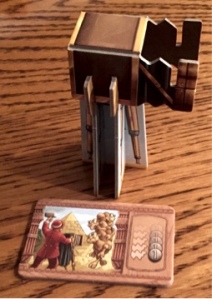 My Thoughts:  This is my favorite module of the expansion.  The photographer and camera can be smoothly implemented with the base game, and I don’t know that I’ll ever play another game of Camel Up without Module 2.  I’m that guy that always secretly cheers for a stack of five camels, even when it isn’t in my best interest, and now I have a gameplay element that can make it be in my best interest.  (It is always nice to see game mechanics that mirror what we intrinsically want to happen.)  In my plays the camera tile hasn’t been taken often — it is rare that the stack gets big enough for it to be worth it — but it is really exciting when it does get taken.

Module 3 introduces bets on a camel’s position in the race, which makes betting more flexible.  There are four additional “position betting tiles” introduced for this module, one each for second, third, fourth, and fifth place.  They are put beside the gameboard, or on the spaces on the back of the game board extension.  Additionally, the five additional leg betting tiles (see Module 1) are also put into play when Module 3 is used. 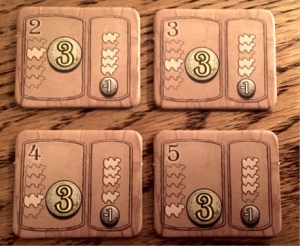 My Thoughts:  I like this module, but it is my least favorite of the four.  This does add flexibility to gameplay, but it also removes some of the tension by giving players that made risky or poor choices a way to wiggle out of their decision, even if the way to wiggle out is itself risky.  It does make the game friendlier, but Camel Up is already a friendly game.  Placing tiles over other tiles seems like a clunky solution in an otherwise streamlined game and expansion.  The designer’s goal was to add flexibility to betting, but I think Module 4 also does that in a much more streamlined manner.

Module 4 introduces betting partnerships, which allows players to cooperate in games of six players or more.  Each player receives a “betting partnership” card and places it on its “available” side in front of him.

On a player’s turn, in lieu of other actions he may trade “betting partnership” cards with another player, flipping both cards to the partnership side.  The other player may not refuse to do this, and the two players are now betting partners.  At the end of the leg scoring round each player in a partnership may choose one of his partner’s betting cards and receive the rewards from that card.  The partner also still receives the reward.  A player does not have to use one of his partner’s cards (if the partner only has negative points, for example).  All cards are flipped back to “available” at the start of the new leg. 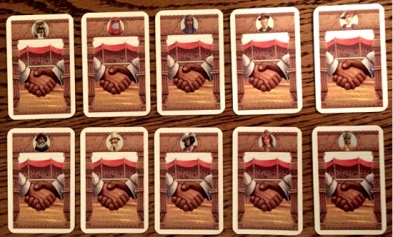 My Thoughts:  This is my second favorite of the new modules.  This module, like Module 3, adds flexibility to the betting, but it does so in a more streamlined, intuitive manner.  The betting partnerships add a fun element to gameplay, one that can, depending on the situation, seem friendly or have a bit of a “take that” feel.  (“I see that you’ve correctly predicted that orange camel will win.  Guess what: we’re now partners!”)

This module also helps balance the game in large crowds.  In a game with six or more players there may not be many good betting choices by the time a later player gets to go.  This ameliorates that problem.

The game comes with additional cards that allow the game to be played with up to ten players.  The cards are nice to have, even if you’re not going to play with 9 or 10 players, as they serve as alternative art cards.  Camel Up is a great game for a party atmosphere, but in general I don’t prefer to play with more than six or seven players, as the downtime between turns becomes too much.

Camel Up is a fun game, worthy of the 2014 Spiel des Jahres title, and Supercup is an excellent addition to the Camel Up franchise.  I like all of the modules, and I don’t know that I’ll return to playing just the base game anytime soon.  Is this a “must have” expansion?  No, probably not.  However, it does add some interesting elements to gameplay, and I highly recommend it, especially at such a reasonable price point.