Ystari Games will release Shakespeare at Essen next week.  I had the game on my Essen buy list, but I managed to snag a copy early.  I’ve gotten in a few plays, so I thought I’d offer a review/preview of the game for those interested in picking it up.  I haven’t had the chance to play the solo version yet, but I have played with 2, 3, and 4 players, and it has a similar feel with any of those player counts.

In Shakespeare, one to four players have six days to put on the most grandiose play possible.  Each player must hire actors and craftsmen, create elaborate costumes, write the three acts of the play, and set the stage.  The player with the most prestigious play at the end of six days (as determined by prestige points) is the winner.

The game has a few different mechanics mixed together, and because no one mechanic is more prevalent, Shakespeare is a difficult game to categorize.  The most important mechanic is arguably the card drafting, but the game also features auctions, action point allowance, and tile placement.  The game is a bit heavier than medium weight (maybe a 3.5 out of 5), with numerous rules for each gameplay element, some of which can be nitpicky.  I’m not going to cover all of the rules here, but rather give a broad overview of the gameplay.  (This review focuses on the 2, 3, and 4 player game and not the solo variant.)

Each player takes a player board, their player markers (7 discs to mark tracks and 5 cylinders to denote actions taken), a Recruitment Rard, four Rest Tokens, and a Player Aid.  Each player board has four character “cards” printed on it (two on the left and two on the right), the set to be constructed with tile placement (in the upper center), and an ambiance track (the area in the lower center between the two masks).

The game takes place over six days.  Each day has five steps:

Recruiting characters and activating them is the bulk of the game.  Each player must recruit exactly one character each day, substituting in their Recruitment Card.  That character may then be activated on the player’s next turn (i.e. you don’t need to wait until the next day).  Players put tokens on the Initiative Track in the order in which they recruit, and the Initiative Track is later used to break ties during the Wager phase.

There are several different characters in the deck.  Each character card has a benefit for activating it (denoted in the top left) and a salary that must be paid at the end of the game (denoted on the top right).  Some cards (typically Actors) have spaces on the bottom for costumes.  The activation power will depend on the type of card:

All cards have a cost at the top right.  This must be paid at the end of the game, otherwise each unpaid character costs two prestige points.  If a player does not want any of the displayed character, he may instead take one, flip it over, and it becomes an “extra.”  An extra can be dressed in costume but does not have an activation power.  Extras do not require a salary at the end of the game. 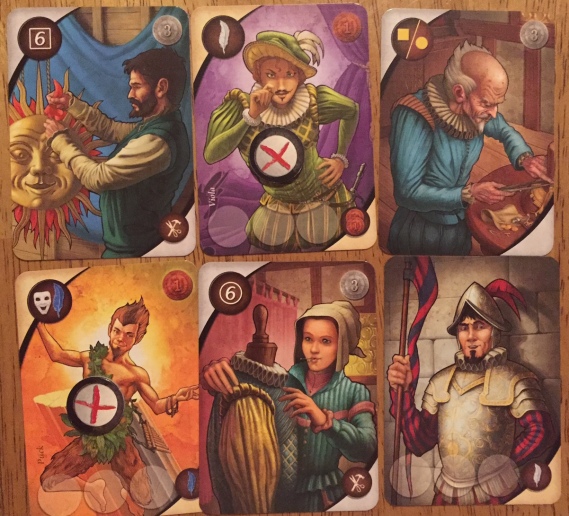 As set elements are built, they must be filled in symmetrically, although yellow set elements are wild.  This means that if there is a blue element on the bottom left, there must be a blue one on the bottom right.  The set is built from the bottom to the top, meaning that there must be elements on the preceding row that can support the element on the next row.  Covering up higher spaces (the ones with candles) can give prestige points.  Each set element also awards a bonus, ranging from money, to movement on the Ambiance Track, to tokens that enhance craftsmen.  A partially completed set is shown on the player board above.

The costumes are important because of costume bonuses and the dress rehearsals.  Once all three costume spaces are filled, the total is added up and a bonus is awarded.  The bonus ranges from money to Prestige Points.  Additionally, during dress rehearsals, the completed costumes get activated and allow a player to move along the three Act tracts.  (On the player board above, the Falstaff character has a completed costume worth 11 points.  This would earn him two prestige points, and he would activate during the dress rehearsal.)

The game ends after six rounds.  At that point the Objective cards are scored, the yellow set and costume elements get a Prestige Point each, and each unpaid character loses two Prestige Points.  The player with the most Prestige Points wins.

I’ve enjoyed my plays of Shakespeare, and I think it is one of the better Eurogames to be released this year.  The clever mechanics, multiple paths to victory, and overall presentation (especially the artwork) combine to make a solid game that deserves to do well at Essen this year.

As I said above, this is a game that is difficult to categorize.  The game features several mechanics, and one of them does not appear more prominent than the others.  My favorite mechanic in the game is the blind-bid auction (a mechanic I generally dislike): it is the most tense aspect of the game, and it works exceptionally well here.  Good characters can be difficult to come by, so going first can be a significant help during the recruitment phase, but gaining this advantage frequently comes at the cost of activation.

This game involves tough decisions, and there is simply not enough time to do everything you want to do.  In short, gameplay is tight.  Balancing the sets, costumes, ambiance track, your goals cards (if you ever even got them), and the salary of the characters is tough, and high scores are difficult to come by.  Yet despite these tough decisions, the game does not seem to invite analysis paralysis, and the time between turns is not problematic.

I think three players is the recommended player count here: in two players there aren’t enough character cards or costume/set elements for interesting choices (making it a bit random), and the four player game goes a bit long, so this game seems ideal with three.

The artwork is fantastic, and the overall production value is top notch.  The theme is arguably pasted on, but the table conversations in my plays have reflected that people felt like they were preparing for a stage production, albeit one being thrown together in a hasty fashion.  Ystari has put thematic explanations on the back of the rulebook, and it is clear that they wanted the Shakespeare theme to come through, and in the end, it does.

The game’s biggest downfall is that it can be a bit clunky.  Because there are so many different mechanics and nitpicky rules, it can feel like an administrative burden, and Shakespeare can be difficult to teach and grasp.  This isn’t a major problem — it is no worse here than most medium-to-heavy Euros — but this isn’t the sort of game that will be busted out for beginners.  The game was just a bit heavier than I expected.

Overall, this is a great game, and I expect it will do well at Essen.  Is this going to alter the gaming landscape?  I doubt it.  But I do think this will get some deserved buzz over the next few months.