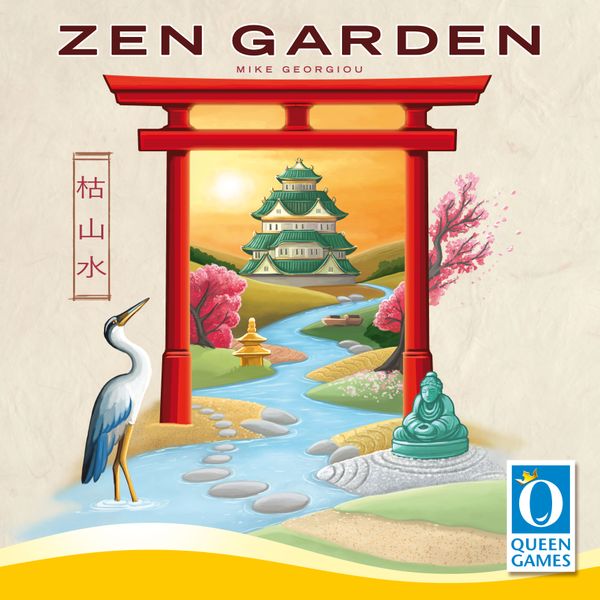 Zen Garden is a new 2020 release from Queen Games – and I was reading the rules, I realized that the intro paragraph in the rules pretty much is a succinct 136 word review of the game. So I’ll copy it here first.  This might be enough for you to stop reading and decide if you want to play it!

“In Zen Garden, the players assume the role of architects working to build the most beautiful garden for the Emperor. To do this they will not only need to pay careful attention to the Emperor’s preferences, but also stay one step ahead of the competition. A turn in Zen Garden is quite simple. The first player will select one tile from the selection board, pay its cost, then add it to their garden adjacent to a previously placed tile. Each player will do this, then the board is refilled. This will continue until all gardens are completed. Then, the Emperor evaluates each garden and awards points to the players, depending on how well his preferences have been met. The player with the most points is declared the new court architect and the winner of the game.”

Now, in a bit more detail –  Each player starts the game with an empty 16-space Garden board and gets a score marker and a coin marker.  There is a selection board that is placed in the center of the table, and garden tiles are drawn at random to fill the array.  Above this are the Preference Boards.  There are 5 total, and prior to the game starting, the players choose the complexity level of the game by deciding how many Preference boards to use.  You always start with Board #1 and can add on boards in any combination – in general, the higher board numbers lead to more complex games.  Board #1 has space for four Emperor tiles; there are seeded randomly from the supply of 14 tiles.

The game is played over 16 rounds.  On a turn, the active player must first choose a tile from the supply – and pay 0, 1 or 2 coins for it based on its location in the array.  Your coins are tracked around the edge of your garden board.  You must choose a tile each turn.  Then, once the tile is chosen, it must be placed onto your garden board.  It must be placed orthogonally adjacent to a previously placed tile.  If your grid is not yet locked in, you may slide all previously placed tiles as a unit within the 4×4 grid – however once you have 4 across or 4 tall, you are locked in that particular dimension.  (This sounds weird at first, but just picture building a 4×4 grid on the table without the board – you can add tiles to any side of your blob until you reach the constraints of the imaginary 4×4 grid).  The tile being placed can be rotated however you like.  If you complete a row, column, or full diagonal – AND all four of those tiles show the same icon in the corner, you earn 3 coins.

The next player then takes his turn.  Note that the display is not refreshed between turns.  Once all the players have taken a turn (in a 2p game, after two turns), then the board is refreshed.  Any tiles left on the free row at the bottom are discarded. All other tiles are slid down the board as far as they will go, and the now-empty spaces are filled from the supply.  The first player marker is now passed on, and play continues.  This procedure repeats until the garden boards are completely full – then the game moves into scoring.

Scoring is done based on the Preference Boards that were chosen at the start of play.  First, you score 1VP per coin left at the end of the game. Board #1 is always used, and there are 6 scoring criteria on this board. 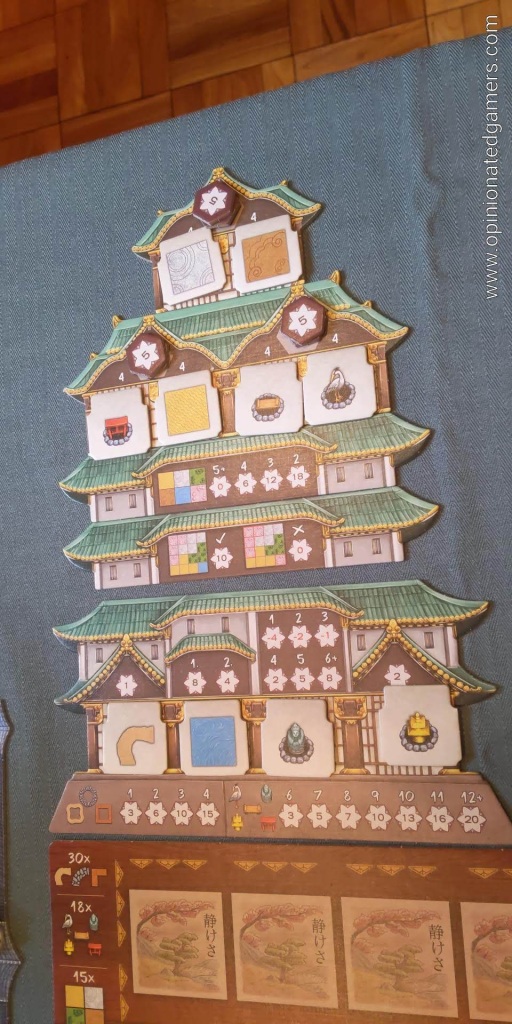 2] Décor – There are 5 icons possible in the corner of the tiles.  If you have 6+ of a particular icon, you will score points based on how many you have (3VP for 6 matches up to 20VP for 12+ matches).  It is possible to score for two different icons so long as you have at least 6 of each.

3] Minor Preference – Each time you match the tile placed in this slot, you score 1pt

4] Major Preference – Each time you match the tile feature placed in this slot, you score 2pt

5] Majority – The player who has the most of this particular feature scores 8vp, second most scores 4vp

6] Attention to detail – Gain (or lose) points based on how many of this particular feature you have in your garden.  This ranges from -4VP to +8VP

If you have chosen to use other Preference Boards, you would also score them now as well. 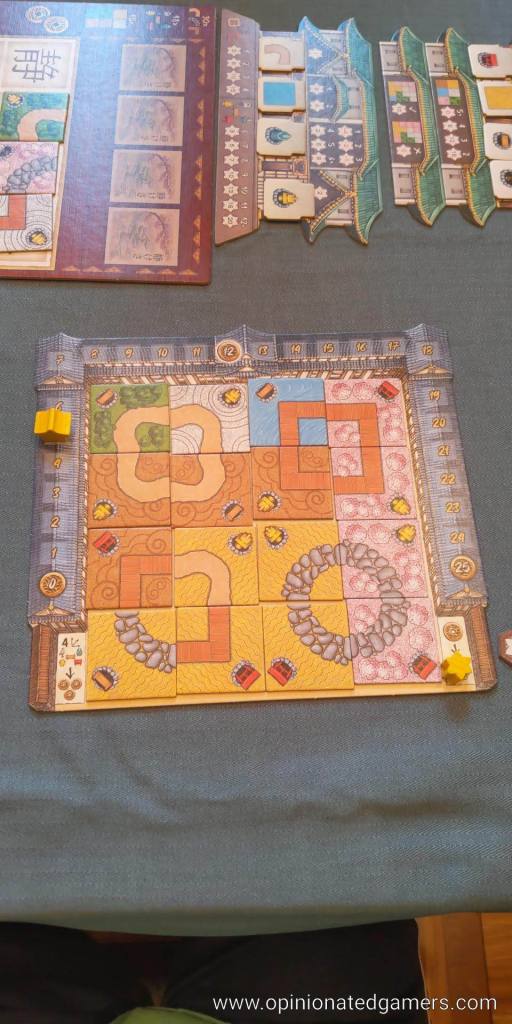 Zen Garden was a game hyped up to me by my friends at Queen as a great family game, and thus far, I think it lives up to that hype.  It is a deceivingly simple game rules wise – pick a tile, pay for a tile, place a tile, and the score at the end.  But – the different levels of scoring opportunities allows this game to go from a beginner or gateway game to a middle weight strategy game.

At its most basic level (playing only with Board #1), Zen Garden is a fairly straightforward game.  While there are 7 different scoring criteria – the 6 on Board #1 and coins – none of them are particularly complicated.   The game at this level is simple to teach and easy to learn, but I think that most gamers will find it a little dull at that easy level.  That being said, it plays quick enough that it might not be a bad way to teach and lock in the basics for a first game.

Having played it a few times now, I would think that most gamers would be able to add in any/all of the scoring boards and do just fine – and probably, a veteran gamer would like the game better with the added complexity of the multiple scoring rubrics.    For me, the game gets more interesting with the additional scoring criteria added on because the added levels of complexity give you multiple things to try to achieve with each tile placement, and this makes the decision of which tile to choose (and where to place it) all the more difficult.   At this more complex level, there are also more opportunities to watch what your opponents are doing and trying to negatively draft to deny them certain tiles (or at least make a desired element more expensive).

The bits are beautiful, typical of Queen Games, and I really like the way that the different scoring boards combine to make a pagoda like structure.  The boards are somewhat superfluous given that you build freely until you make a 4×4 grid, but I can see how it might be easier for non-gamers to visualize the grid with the board – and anyways, you need somewhere to track your coins – though I suppose if there were no boards, the coins could have been cardboard punchouts.  The rules are well laid out, and there are plenty of visual examples and clarifications that make it super easy to learn from the rules.

Zen Garden is a nice game which can serve both as an entry level game or a midrange super filler. Either way, the game is enjoyable with the right setup for just about any setting, and this versatility will likely help keep in the gaming basement for now.

Mitchell T: We’ve played this game (two-player) about a dozen times, exploring all of the scoring options, from most simple to most involved. It’s very enjoyable, aesthetically pleasing, brief, and provides enough of a challenge to keep us engaged. My wife and I are in a lockdown gaming pattern where we play one middle-heavyweight Euro mid-late afternoon,  usually the same game for a week or two, before we move on, and then a lighter game in the early evening. The best expression I can use to describe Zen Garden is pleasantly engaging.

Zen Garden may become a staple for the early evening rotation, along with our recent excursions with Miyabi, the three Azuls, Kingdom Builder, Quest for El Dorado, Mandala, and Keltis Oracle. I don’t know that Zen Garden will have the ultimate resilience as the above favorites, but you never know., All of these games are aesthetically pleasing, present neat interactive puzzles, provide a thoughtful challenge, feature versatility, and most importantly—they are fun!

James Nathan: I went with Neutral below, but it’s a high “Neutral” or a low “I Like it.” As a light-weight accessible puzzle game, it serves its purpose, and even has just a hint of theme with its relaxedness.