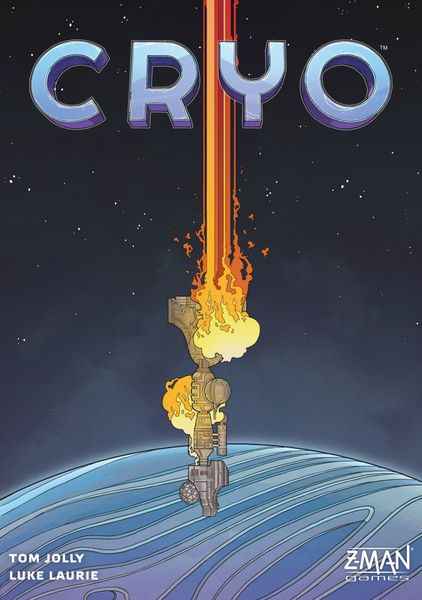 The story: “A mission gone wrong. Tensions continued to mount aboard your colony ship as the days dragged on. An anonymous act of sabotage has sent the ship plummeting to the surface of a frozen uncharted planet. Damaged beyond repair, the scattered remains will do little to protect you from the brutal cold.

In the engine-building, worker placement game Cryo, leaders of separate, hostile factions compete to survive and claim control over the underground caverns on a remote icy planet. You need to act quickly and strategically to avoid further sabotage from other factions. Send drones out from your engineering platform to scavenge resources and save your crew still in cryostasis. Gather different materials to upgrade and customize your platform, fine-tuning new actions to suit your individual strategy. Utilize multi-use cards to your advantage, and claim the underground caverns for your faction to survive.

Though unplanned, a new chapter for humanity has begun. Scavenge, build, explore, and lead your faction to victory within this frozen world before the sun sets!”

The board shows two main areas, the four pods of the colony ship at the top with the cavern system on the planet at the bottom, with 2 caverns already visible.  In the colony ship, there are a number of “stasis areas”; each player starts with their 15 crew pods distributed amongst these areas.  Each player gets their own player board which has area for their drones as well as places to track the four materials (pink crystal, green organic, yellow tech and purple nanite) as well as energy.  The purple nanite resources are wild and can replace and other material.  Each player gets three drones which are placed on the leftmost docks on the player board. The deck of cards is shuffled and placed near the board. 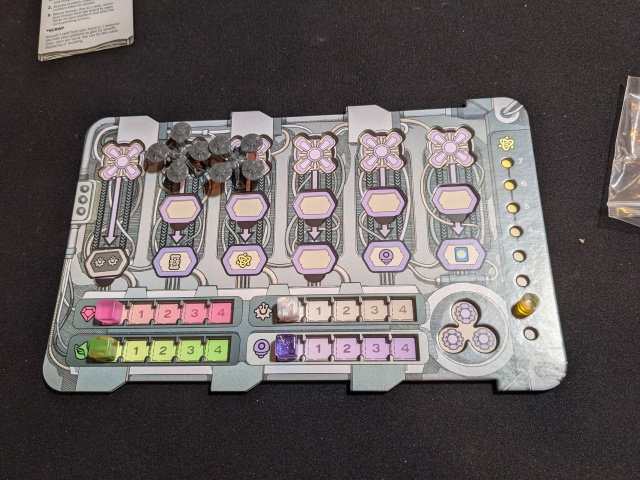 There are incident tokens which must be separated by type (essentially, early game, late game, end game).  The game will end on the turn where a player resolves the end game incident OR when all of a player’s available crew pods are placed in caverns.

Until the game ends, it is played in a series of clockwise turns; each player choosing to either Deploy or Recall on their turn.  Also, once per turn, you can SCRAP.

DEPLOY –  Take one of your drones from your player board and place it on any available drone landing space in the ship.  When you place it, that drone will have access to any action spaces it is adjacent to.  Some of the actions can be done multiple times, and this is denoted by the number of purple circles at the top of the action space.  Some of the possible actions are:

OK, before I move on, let me talk about the cards for a bit.  There is a deck of 40 cards, and each can be used in one of three ways.  First, the bulk of the card is a vehicle.  This is played at the bottom of the player board, and it can be used to transport crew pods from your board to the surface.  Some vehicles also have special abilities. 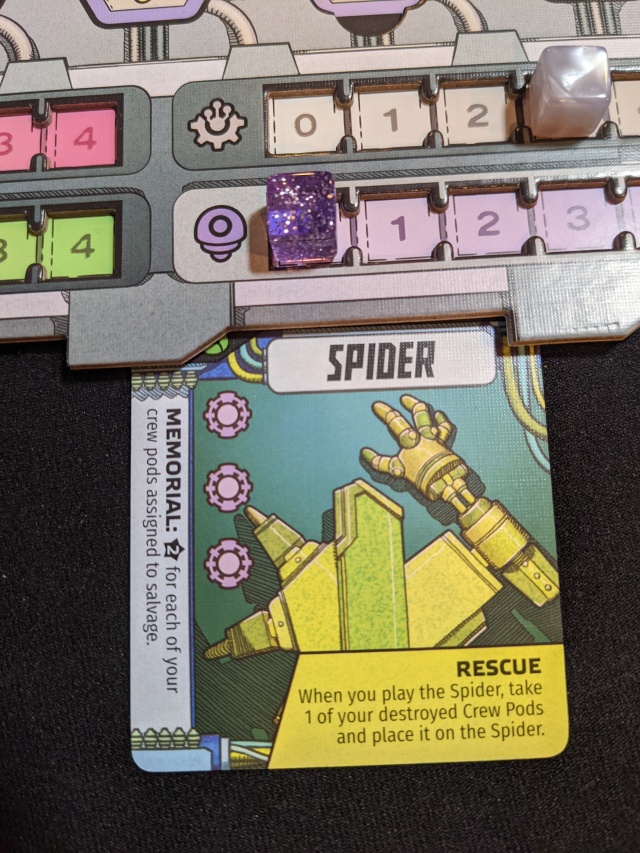 Second, there a yellow Upgrade box at the top.  These cards are slipped under to top edge of the player board; and each gives you a ongoing special ability for the rest of the game.  You can only have 3 Upgrades (no duplicates).

The third area is a Mission, found on the left edge.  These are placed under the left edge of the player board, and these missions give endgame scoring bonuses.  You can have 3 Missions, but no duplicates.

RECALL – When you recall, you take all of your played drones back from the action spaces.  There are three steps to this turn. First, you Salvage – you get 1 material for each crew pod you have in a salvage spot.  Then you resolve any one incident token (each of the four ship sections has an incident token on it). A Sabotage token causes all the pods in the lowest numbered stasis chamber without a sabotage token to be destroyed.  Looting tokens give you things as shown on the market.  The Sunset token ends the game.  Finally, you return your drones to any open dock on your board.  Then, if the action underneath this dock is complete, you take the action shown.  (You need to have collected and placed Resource markers in an earlier turn to complete these actions).

SCRAP – This is a little extra that can be done once a turn, regardless of whether you decided to DEPLOY or RECALL.  You can discard any resource tile from your board or card from you hand to gain a benefit (either what is printed on the resource tile OR what is shown in the scrap area on the card). 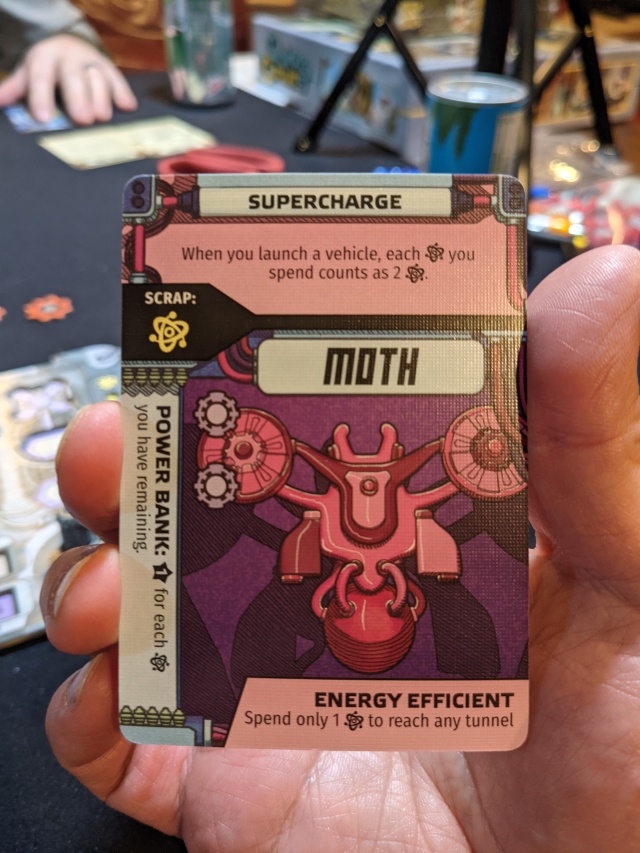 Again, the game goes on until someone either resolves the Sunset incident or all of their available crew pods are placed in the caverns.  Then the game move to endgame scoring. 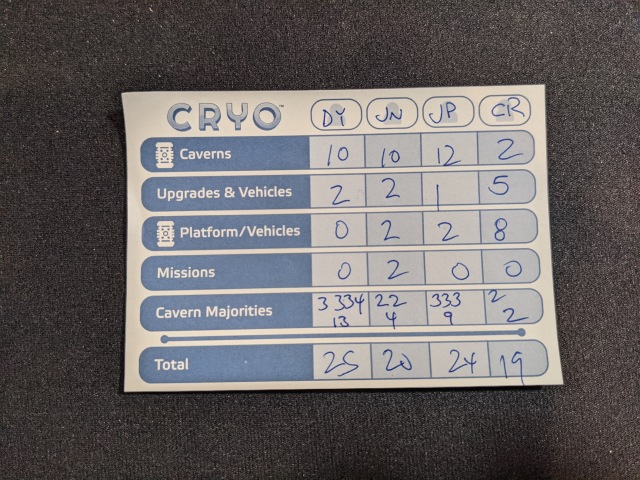 Cryo is a game that combines a worker placement mechanism in the spaceship portion of the board with an area majority scoring system down in the caverns.  While the game does use worker placement as a mechanism, this term is somewhat loosely applied when compared to other games in that genre because there is not as much scarcity of action as each action spot can generally be accessed by multiple drone landing spots.  In that sense, it is a more forgiving game-timing wise as players often have multiple ways to accomplish the action they desire.

Early on, players seem to focus on resource production and gathering resource tiles, but as the player boards get more completed actions and crew pods are assigned to salvage areas, players start to be able to gain resources even on the Recall actions.  This ability to take actions when resetting their board is nice, and one that seems to be a hallmark of Luke Laurie games.  Here, it provides a nice puzzle as players try to figure out how to maximize their actions.  Do you work on getting the resource tiles early on to get stuff with every RECALL action? Or do you slow down on the “engine build” in order to get more useful actions immediately?  Also, if you have decent actions completed on your board, sometimes it makes sense to RECALL more often to take advantage of the recall actions as well as maybe getting yourself off-cycle with the other players as this could increase the free spots on the board available to you in later turns.

The race to place crew pods in the cavern is interesting.  First, there is a fair amount of incentive to explore a new cavern because the free crew pod placement saves a lot of resources.  This action seems maybe a bit overpowered, but in a worker placement game – everyone has access to it – so you just have to decide what your priorities are…  Second, there is the constant decision about the timing of settlement.  If you go too soon, you give other players a chance to combat your placement.  If you wait too long though, the game could end before you can move them off your player board!  The end game timing system is interesting in that any player can choose to end the game once the Sunset marker makes it to the board.  Thus, you need to always be watching the supply of incident tokens and planning accordingly.  In our first game, Craig missed on settlement by one turn; had he been able to settle his 5 crew pods, he would have finished 1st instead of 3rd; however, the end of the game snuck up on him and he missed his opportunity.

The artwork is nicely done and the iconography is easy to read/understand. There is a helpful half page reference on the back of the rules to explain things, but frankly, you likely won’t need this at all.  The rules themselves are clear, easy to follow and provide enough example illustrations and examples to answer most questions.  The drones and crew pods are sculpted plastic bits, and while normally I would say that they could have just been cardboard chits; in this case, the 3D aspect of the bits is nice as it makes it super easy to pick them up and move them as opposed to a flat 2D chit.

The game plays at a pretty steady clip, with much of the planning being able to be done between turns.  Sure, you can’t make a final decision until you know what actions are available to you – but again, many actions have multiple ways to be accessed, so that sometimes isn’t an issue.  I can see 4p games coming in at 45-60 mins for sure once everyone is familiar with the game.

Overall, I have been impressed by my first games of Cryo. It is a nice mix of ideas, and the game works well.  It is simple enough for most any gamer to learn yet offers enough choices to keep heavy gamers interested.