Dale Yu: Review of Cold Case: A Story to Die For

Cold Case: A Story to Die For

In this game, you play the role of a police officer, who is looking though an unsolved case from the past, a “cold case.”  As it happened more than 30 years ago, your only source of information is the file folder filled with the records, interview transcripts and other evidence that was collected back when the crime occured.  You are tasked to examine the evidence in the file and see whether or not you can solve the mystery…

The story from the publisher: “In 1988, Andy Bailey, a 23-year-old investigative reporter, was found shot to death in the small town of Camdale, England. Despite their best efforts, the police never found his murderer. In Cold Case: A Story to Die For™, YOU investigate the cold case of Andy Bailey and attempt to solve the crime. Immerse Yourself in a Cold Case Mystery In the Cold Case™ series, you have been summoned to investigate the unsolved cases of victims murdered decades ago, piecing together the details that the police could never find. Inside the box, you will find realistic materials pertaining to the crime, and a complex story containing everything you need to crack the case. Follow the clues and submit your answers online to finally bring the killers to justice. Great for a small group of friends or a single-player experience, Cold Case integrates puzzle-solving and crime fiction into an immersive investigative experience.The police never identified the murderer. Can YOU?” 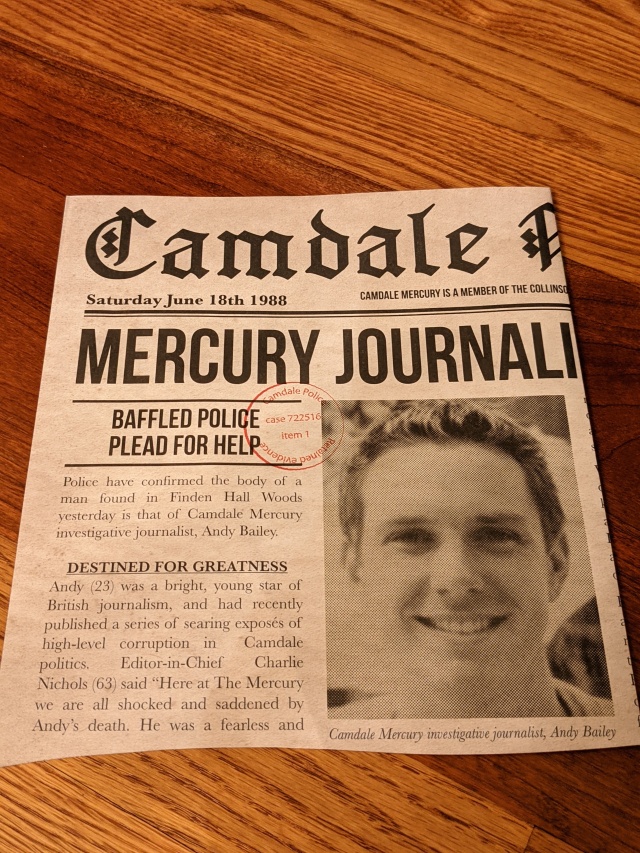 The company has previously published the Escape the Room games – a number of which we have reviewed on this blog (here, here and here) – but the format of the Cold Case games is a little different.  Instead of a linear string of puzzles to solve as you go thru everything, here – you get all the information at once and essentially a single question – who is the murderer? Well, that’s not entirely true – the brief set of instructions that you get actually has four questions on it, but they are all related to the same crime. 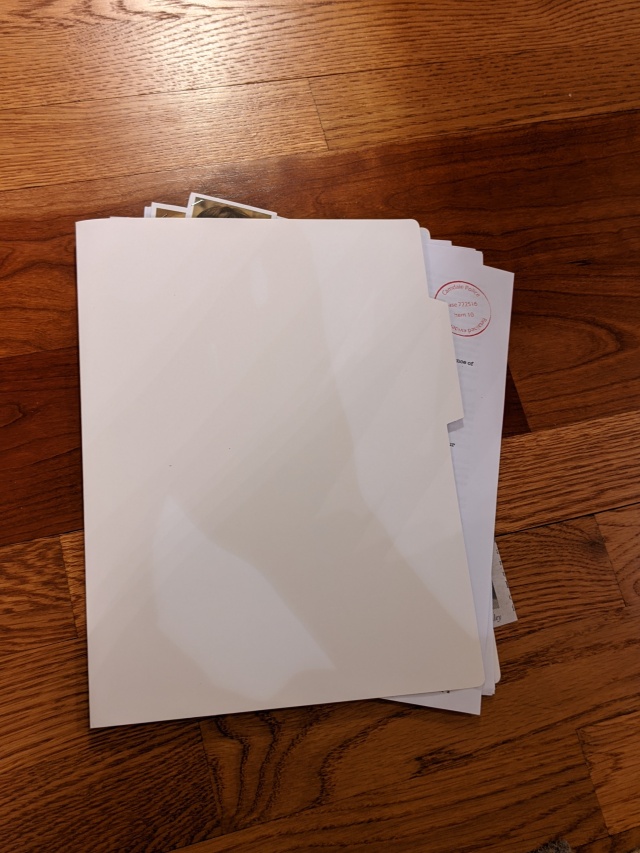 So, back to the game – it comes in a slim letter sized box.  When you break the seal and open it, there is a single white file folder inside, crammed full of stuff.  On the top of this stack is a letter from the current chief of police, telling you that you have the file for this unsolved case, lists the 17 documents that you’ll find in the envelope and then poses four questions for you.  She can’t be bothered to talk to you again, and she instructs you to log into a website to plug in your answers when you think you have solved the mystery.  That’s the extent of the instructions. 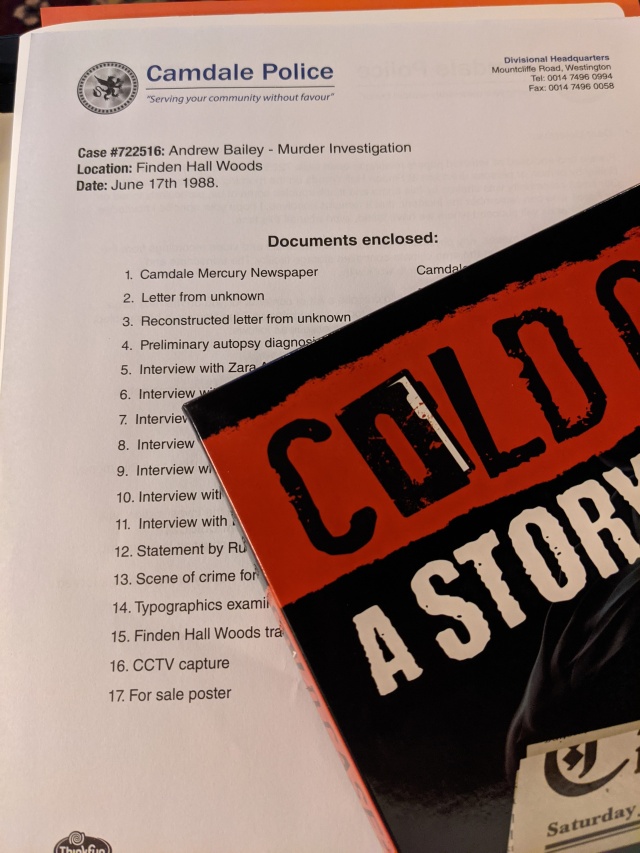 Of some note, the items in my folder did not come in numeric order (as listed on the introductory letter).  I didn’t know if this had any significance, so I read them in the order in which I encountered them (going from top to bottom) – and in retrospect,  I don’t think it mattered at all.  I did cross reference the list of documents to make sure that I had read them all though.  What you get is a varied selection of documents – a newspaper, some reports from the lab, 7 or 8 transcripts from interviews of persons of interest and a few pieces of physical evidence. 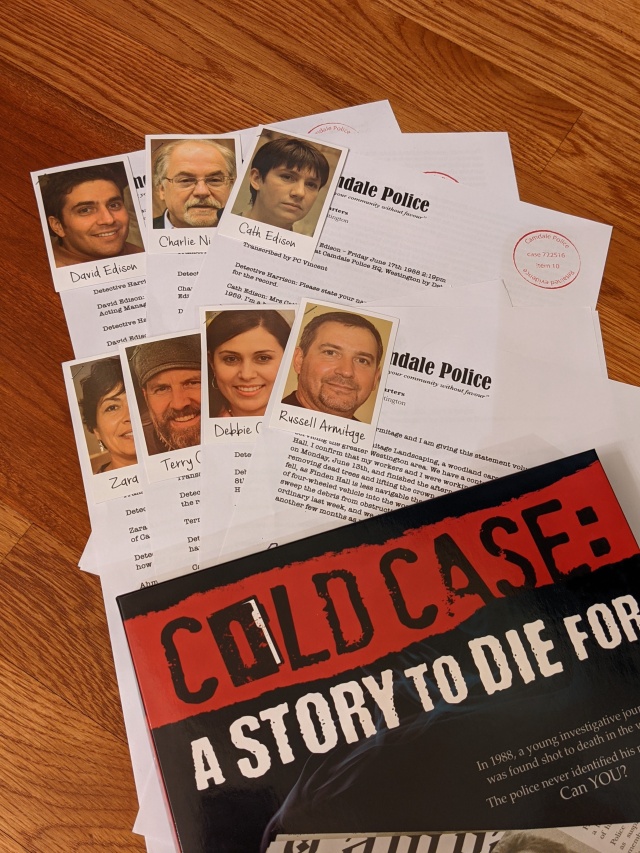 Once you’ve read everything and digested it, then you head to the website and try to answer the questions.  The format is a multiple choice affair, and the website is easy to navigate.  Though I got the questions correct on my first pass, I later went back to experiment with the website, and it does do a really good job of helping you find the information you need if you do enter a wrong answer.  As far I could tell, there is no hint system other than that.

The entire experience was an enjoyable solitaire activity – I sat on the sofa poring over the documents for about 35 minutes, and then it took about 2 minutes to answer the questions on my phone browser.  The story was well laid out, and it was an interesting way to see the mystery unfold.  Unlike some of the other “escape room” games that we’ve reviewed, this experience really felt more like reading a mystery novel, in 17 short chapters, and then I was expected to write the final chapter when the detective gathers everyone in a room and then explains who did the crime and what evidence was found to support my deductions.

Overall I found the difficulty level of this one to be on the easy side, and as such, I would heartily recommend it for teens or neophytes to the genre.  It was really good as a solo game, and I think it would work well as a group project too.  There are enough different things to read that everyone could be busy reading something – it would be up to the group if all players would read everything or if the stack could be split up and each person could report back on what they found on their documents.

Like many of the mystery games, nothing is destroyed in the playing of the game, so even though you’ll only be able to play it once, you’ll have something that you can pass along or trade to a friend.  It appears that Think Fun already has a number of these cold cases in the production pipeline, and I’m looking forward to solving some other cold cases this summer!

Update – the publisher has announced a preorder sale for the games!    A Story To Die for is currently 20% off using the promo case 20COLDCASE — https://amzn.to/3c0BOcN