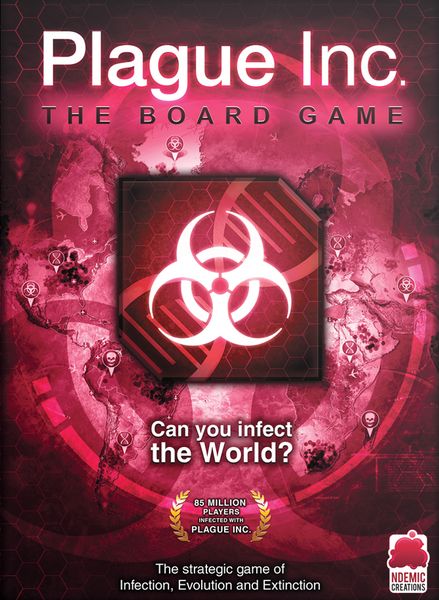 Plague Inc is a game that has been around for a few years now, but is getting a re-release this summer.  Given the global pandemic, infectious things are all the rage, and I suppose that people felt it was time to get this back on the market.  Given the resurgence of Pandemic and the rest of its game family, there is definitely a desire to play games with the theme…  However, there is a twist here because in this game, you’re not trying to save the world, but rather infect it all!  If the title of the boardgame sounds familiar, it may be because you once played (and maybe still do) the game on your phone!  Each player is a deadly disease and they must battle against each other to spread their plagues, develop new symptoms and ultimately wipe out humanity.

The very pink board is a schematic of the world, split up into six non-Antarctic continents. Each player gets a player board (called the Evolution Slide) in their color with plague tokens in a matching color.  There are 3 decks of cards.  Each player gets a starting Country card (which they put on the board and mark with a Toekn of their color) and then the rest of the country cards are shuffled into a deck (size dependent on the number of players), then the top 3 cards are splayed out face up next to the board.  Event cards and Trait cards are also made into their own decks, and each player gets a hand of 5 Trait cards to start the game.

Turns are played in order until the game ends.  There are 5 Phases: DNA, Country, Evolution, Infection, Death.

DNA – Score 1 point for each country that you control (i..e. Have the most tokens in)

Country – Pick a new Country card (one of the 3 face up or the top of the facedown deck) and then decide to place it on the board or discard it in order to discard your hand of Trait cards and draw a new hand of 5 Trait cards.

Evolution – Your Evolution Slide (player board) has a few core traits printed right on it, and there there are spaces for 5 Trait cards.  To play a Trait card, you must pay a DNA cost as seen in the top left.  Interestingly, you’ll score DNA points at the end of the game for the cards on your Evolution Slide, so many times, this cost is just really borrowing from yourself.  Also note that some of the empty spaces on your Evolution Slide have pre-printed abilities on them; you can use these abilities if you can see them, but if you put a card in that slot, you will no longer have that ability.  You are limited to adding one Trait card per turn to your player board.

Infection – Check your player board to see your total Infectivity trait – this tells you how many tokens you must put down each turn.  You can infect cities (black hexagons on Country cards) if you are connected to it AND if you can survive in the climate.  First – for climate – you can always infect Neutral climate (white) cities.  In order to infect Hot (Orange) and Cold (light blue) cities, you must have evolved resistance to that extreme climate.  In order to be connected, you must already be on the same continent OR be in a airport Country going to another Airport Country OR be in a Seaport country going to another Seaport.  You check for connections after each token placement, so your Infection tokens can jump across the globe quickly with the right set of connections!

Death – If you control a Country that is fully infected (i.e. every city space has an infection marker on it), then you try to kill it.  Check your Lethality level on your player board, then roll the Death Die.  If you roll a number equal or less than your Lethality, you kill the country.  All players score 1 DNA point per token in that country, and all players in that country draw a single Event card (regardless of how many tokens they had there).  Event cards have special rules on them and can be used in any later turn in the game.  IF they are not used, they are worth 1 DNA point at the end game scoring.  The Country card is removed from the board and kept by the player who killed it.

And, no I have no idea why the rules refer to the Death Dice instead of the Death Die.  Ack!

After this, the next player starts their turn and goes through the same 5 phases.  The game continues until the final Country Card from the deck has been placed or discarded – and then it moves into a special Sudden Death phase.  Skipping the Country phase, turns are played as normal, but the game will end immediately when any player no longer has tokens on the board OR a player can neither place tokens nor roll the Death Die on their turn.

Players gain points for the trait cards currently on their player board, and three bonus criteria are resolved as shown in the photo below:

The player with the most points wins. Ties are broken in favor of “The player who is first to lie on the floor and pretend to be dead”.

Well, despite the macabre theme, it does admittedly seem timely right now.  My regular group recently played Pandemic Legacy Season 0, and we had a blast.  But, because of that, they were a bit burnt out on the infectious game, and passed on this originally.  I left it sitting on my desk, waiting for them to come around – but then my kids noticed that I had it, and they were overjoyed because they still play the phone app to this day.  Needless to say, I found my audience for this game :)

It’s a pretty decent port of the electronic game – turning the solo phone game into a competitive area control game.  There honestly aren’t any unique ideas nor mechanisms here, but that’s fine.  The game is easy to teach/learn, and pretty accessible to games without a lot of experience with games.    Sure, it helps to have some experience with games to figure out which Trait combos are going to work best, but on the whole, this is a family-level game complexity wise.

At the start, the decision point seems to be – trying to gain an unassailable advantage in a few cities to make sure you can kill some off versus spreading yourself widely to allow for maximum infectivity later in the game.  In the end, it seems pretty easy to move about the board, especially when the airports and seaports are in abundance – but be careful – as it is easy for you to move around the globe, so it is for your opponents!  You can quickly be snaked out of a majority in a country before play gets back around to you…

The game is fairly swingy – mostly because the Trait cards come out randomly, and some combos are better than others.  The game seems to combat this by allowing players to throw out their hand and draw a new one each turn (in the Country phase) – but that’s a lot of variance in each draw.  I suppose it evens everything out – if you don’t have a card you like in your hand – just draw a new hand!

The components are… fine.  Fine for 2017.  There’s nothing wrong with any part of the components, but there really isn’t anything that stands out either.  The art is utilitarian and maybe you like that sort of thng.  At least the cards are easy to read and icons easy to parse; so if nothing else, the art design doesn’t hinder gameplay.

And I guess I should note that while I think that the gameplay is pretty simple, the scoring at the end can be a bit complicated in comparison.  It takes awhile to go through the six continents and score the bonuses – though at least there aren’t any tiebreakers; all players who have the most get the full bonus.  I suppose that the bonus scorings can also lead to a bit of AP/Kingmaking, but it hasn’t happened – in this case, my kids and I have just chosen not to compare each others scores until the end so that we don’t spend ten minutes of a 30 minute game trying to min max our final turn or two. It may not be the best plan strategically, but it keeps the game length down, and it doesn’t seem to lessen our enjoyment of the game.

For a simple area control game, this one is fine.  It may score bonus points with some (such as my kids) due to the tie-in to the hugely popular phone app (the box proclaims over 85 Million downloads).  I guess this is a good time to mention that there is also a solo game in the boardgame, but not one of us was tempted to try it – “why would I try it Dad… I have a solo version on my phone!”.  For a family game, this worked well enough for us.