Lost cities is one of the classic two-player games in my collection. It has always been one of my go to games when posed with the question of what to show a new gamer and there are only the two of us around. The original game has the right mix of tactical strategy, card luck, and push your luck excitement which has kept it a mainstay in my 2p rotation.  The original game has had a number of spin offs including a board game version as well as an entire line of Keltis games.   This most recent version capitalizes on the current trend for roll and write games.

In this game, players start with an empty score sheet. On this sheet you will see the six different colored expeditions, each in its own column. There is also an area on the right for artifacts and dice.  As in the base game, you will work on these Expeditions from smallest to largest number.

In each turn of the game, the active player rolls all six dice. There are three dice which have colored spots on them, and 3 10-sided dice which have the traditional 0 through 9 on them. The active player gets to make a combination first, and chooses one of the colored dice as well as one of the numbered dice. This color and number combination is then written on the sheet,  again remembering that you must always write the same or higher value than the one written below it in a particular column.

If you have not yet started a color, and you choose the 0 number die, you can mark the “Double Point” circle at the bottom of the column. Otherwise, you write your chosen number in the bottom most available space in the column –  again only valid if the number is the same or higher than the number written below it. 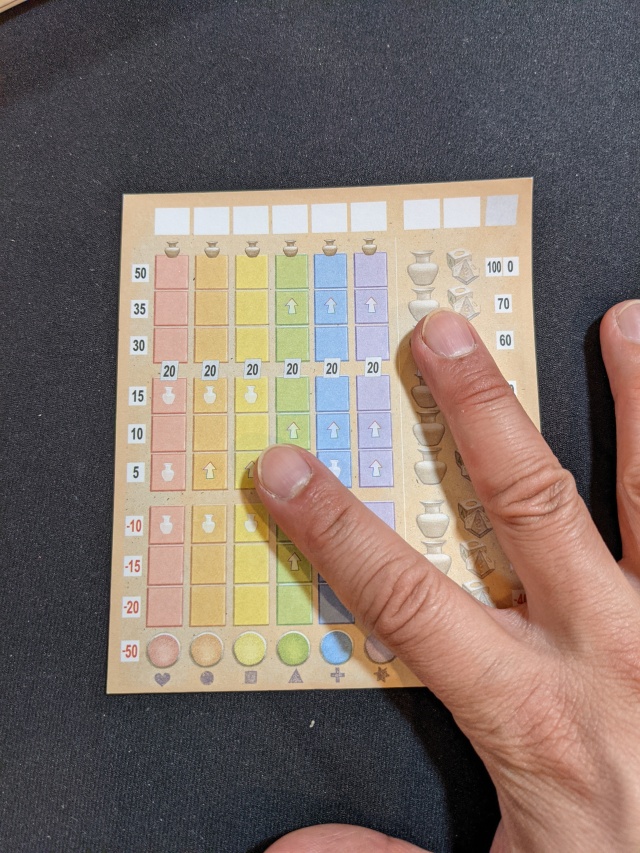 Some of the spaces have arrows in them, and if you write a number in that space, you can accelerate any of your columns by filling the bottom most available space with the same number found directly beneath it –  essentially, a free space filled in for that column.   Some of the spacess have artifact icons in them.  When you write a number in these spaces, you also mark off a space in the artifact column found on the right of your sheet.

If you are unable to find a valid combination, or if you choose not to accept a combination, you can refuse to take a pair of dice, and simply mark off a die in the die column on the right of your sheet.

And all of the columns you will see that the 7th space from the bottom has a 20 Point bridge icon in it. If you are the first person to make a mark in this column in that space, you will score the 20 Point bridge bonus.

Once the active player has made his die choices and marked his sheet, the other players now make their own combination from the unchosen dice, and they mark their own sheets following the same rules as outlined above. The starting player rotates one position, the dice are rolled again, and the game continues on. You keep playing until all eight Bridges have been crossed by at least one player or all players are “exhausted” –  this happens when a player has crossed off all 9 dice in their die column. 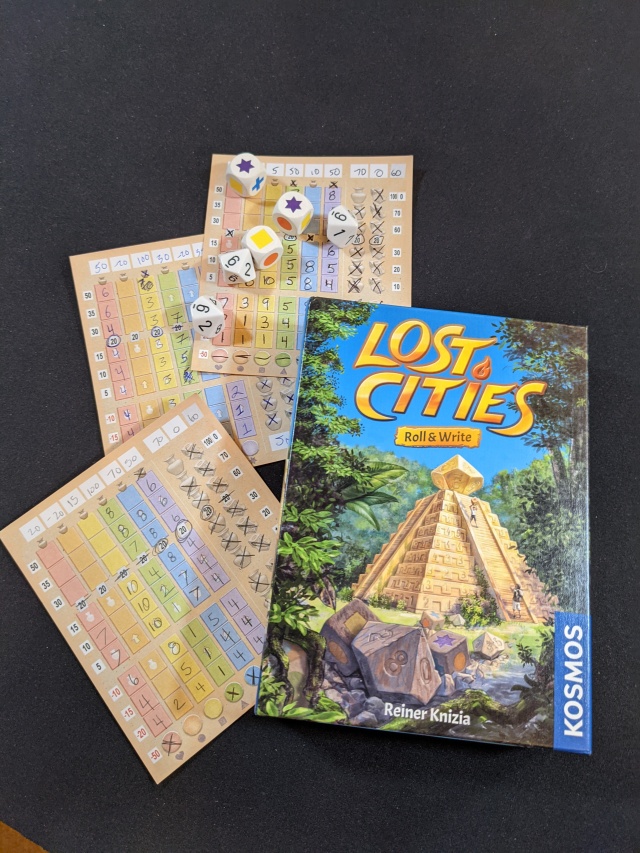 When the game end is triggered, scores are tabulated.  For each of the colored columns, players score points equal to the highest most space which was filled in –  the scoring chart can be found on the side of the sheet. Note that the scores can be positive or negative depending on your progress in that column. Additionally, if you filled in the “Double Point” circle, you must double your score for this column whether you scored positive or negative.   The artifact column is scored in the same way,  though there is no Double Point bonus.   Finally, score the die column,  but note that any player who is exhausted (that is, anyone who has filled in all nine dice in the column) scores zero for this column.  Finally, add in any 20 Point bridge bonuses that you collected. The player with the highest score wins the game.

Lost Cities: Roll & Write is a pretty faithful translation of the base game to the pen and paper genre.  You get much of the same feel of the original game but with different components – something that feels more at home in 2021 as opposed to 1999. In many ways, this game will feel very familiar if you have played the original, though the dice feel a little more variable than the deck of cards in the base game.

The game is very much about timing. You want to try to optimize your plays as much as possible, trying to make sure that you are able to get to the top of a column that you start in order to score maximum points. In order to do this, you might need to pass on a middle-range number at the start of a column. For example, it will be much easier to make it to the top of a column if you start with a 0 or 1 as opposed to starting with a 4 or a 5. That being said, there is still a little bit of a race element to the game, and if you wait too long, other players may finish the game before you really get started. If nothing else, other players may beat you to the very valuable 20 point bonuses.  So at some point, you may have to make a decision on starting a column with a sub-optimal number and just hope that the dice fall in your favor.

I have actually had some success with starting a column early in the game with a bad number. To some degree, at the start of the game, all players are looking for low numbers. I have found that if I am looking for a 6 or 7 in these early stages, most other players are not looking for anything this high, and I end up getting the dice I want left for me. I once had a game where my first 5 entries in a column were all the number 7! Yes, it seems ridiculous to start a column at 7, but since nobody else wanted 7s,  I was able to choose it nearly every time it was rolled, and I just had to hope that my color was one of the two dice available.  Definitely a high-risk strategy, but one that paid off for me,  at least this one time.

While much of the game feels familiar to the original, it is most definitely not the same game. The original game is 2 player only, and there is a definite palpable tension between the two players. Every time that you play a card, you know that it is something your opponent therefore cannot have. You also have the direct back and forth movement with only two players. In this game, you have as many as five people playing at the same time, and because you are rolling dice, literally any combination is possible on any turn.  It is a bit more unpredictable as a result.  There is more of a racing feeling in this game, especially for the bridge bonuses. In this roll and write game, although you are not always the active player, you get to make decisions on each turn, so you are constantly engaged with the game and there is very little down time.

The components seem just fine for a roll and write game. The sheets are of decent quality, and the icons are fairly easy to see and understand. I like the fact that each sheet allows you to write in your own scores at the very top. I have played the game probably 10 times by now, and we are just more than halfway through the pad of scoring sheets. Very soon, I will simply laminate four of them and convert this game into a dry erase marker game. but certainly for the low retail price, around $15, you get more than enough sheets to play the game to your heart’s content.

Overall I have enjoyed this game, as evidenced by the fact that I am still playing it months after initially receiving it. This game seems to pass the test for R&Ws, and it will soon be immortalised by the laminating machine to add to my permanent R&W collection.

Mitchell: We’ve been playing this (2 player) regularly over the last few weeks as a light evening game. We’re about ten plays in and haven’t tired of it. It’s a pleasant game with some neat decisions. And it is a bit more interactive than most games in this genre. We’re pleasantly surprised!

Brandon K: I feel like this was a pretty well done adaptation of Lost Cities and felt like Lost Cities, but ultimately it doesn’t really stand out in the Roll and Write field, so it’s kind of destined to be lost in the field. I’ve enjoyed my plays of it, but I don’t know that I’ll be searching out more of them.