So… it’s not often that I get a published game which is not yet in the BGG database, but Downtown Farmers Market falls into that select niche.  While I’m trying to confirm it, this game appears to be a retheme of Lost Seas, a game also listed as a 2022 release. (It has since been put into BGG, but it is not listed as a reimplementation of Lost Seas…)

In this game, you are a shopper at a farmer’s market – trying to get ingredients to fulfill eight different demands.  Each player receives a set of 4 two-sided challenge tiles, and they line these up at the top of a (currently imaginary) 4×4 grid.  They can choose either side of each tile; one side is specifically harder to achieve than the other.  Once they are placed, another set of 4 challenge tiles is dealt out, and these are set up in a column bounding the same grid.  Each of these 8 challenge tiles shows the scoring conditions for the particular row or column that it heads.

Once each player has their grid set up, then the 65 food tiles are shuffled, and a display of 5 face up tiles is created. The game will be played in sixteen turns, with each player getting a tile to place in their grid each round.  Interestingly, the game is played slightly different based on the player count. 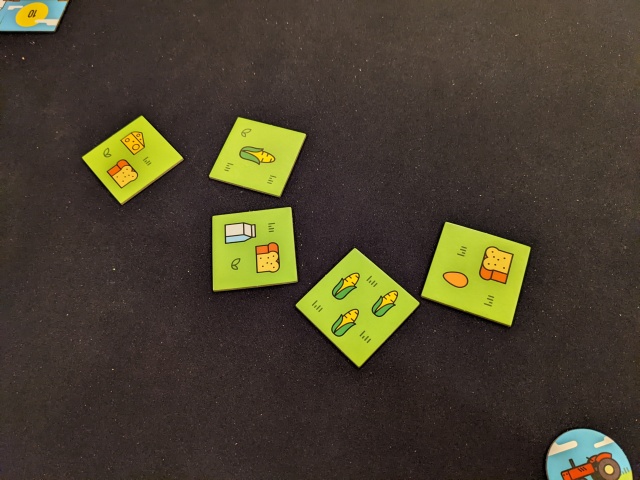 In all cases, a single tile will be left over, and this starts the display for the next round; 4 new tiles are added to the display to bring it back to 5 for the start of the next round.  The first player token moves clockwise and the entire process is repeated.

When you take a tile, you simply place it in any empty spot in your 4×4 grid.  Once it is placed, it cannot be moved.  Again, your goal is to try to meet the criteria of the challenge tiles.  There are varying sorts of scoring rules

When the entire grid is full after the sixteenth turn, you simply score each of the challenge cards, taking points if you have met the criteria, and scoring no points if not.  The player with the most points wins.  There is no tie breaker.

Downtown Farmers Market is another solid family game from Blue Orange.  It is easy to learn, and has simple appealing graphics.  The overall game time is short, and this helps make it attractive to most folks.  The box footprint is small, and it has a pleasing magnetic closure to keep everything in place.

The game itself is quite simple – it’s really just a logic puzzle to try to figure out.  Sure, it’s not always going to be easy, especially when you are drafting last in turn order.  But, you just have to make the best of it.  Most of the easy scoring criteria are simple, and you should be able to play most any tile you pick up.  The advanced tiles are obviously harder to complete, but they also offer higher reward.

I like the way that the game gives the player the chance to choose which sides of the tile they want to use.  If I was playing with gaming newbies, I’d possibly just make the first game easy side only for everyone; but the game is really quite simple, and I think after the first game, just about anyone would be able to choose which side of the tile they wanted to try to score.

As I mentioned briefly in the rules recap, it is interesting that the game plays different with the player count.  At 4p, there isn’t much call for hate-drafting or hate-discarding, as you are usually just pulling a tile that you need.  At the other counts, the first player gets to discard a tile before anyone else chooses, and it makes the game a bit cagier/tactical.  Thus far, I think I like 3p the best as I like the interesting decisions that you get from discarding tiles; but this also slows down the game as you will have to look at the opponent’s boards and figure out which tile they need so that you can nerf it.  There is a bit of imbalance in that the original start player gets one more round to discard a tile, but that’s a small niggle, and I’m admittedly too hard on such things. It’s just my pet peeve.  I suppose if you really wanted to equalize things, you could just roll a d4 and let luck decide what was taken out of the display.   Or, maybe have the last player to choose be the one to nerf a tile.

Downtown Farmers Market is a simple game which can be enjoyed by all levels, and I like the fact that it can stretch to both ends of the spectrum.  It’s a good filler for my game group, but it could also be a gateway-ish game to non-gamers.  For now, it’s a keeper, but the goal cards may end up getting a Sharpie makeover…