Review of Innovation: Echoes of the Past

Over the last twenty years of board game development, one of the most inspiring trends is the extraordinary new designs for card games. These games incorporate different ratios of three magnificent features: deckbuilding, multiple card functions, and/or synergistic card combinations. Taken as a whole, and then linked to expansion sets, we have a seemingly infinite variety of card playing game systems, evoking deeply layered landscapes of narrative and play. From the deckbuilding culture of Magic, to the relative simplicity of San Juan, to the icon-driven approach of Race for the Galaxy, to the frivolous combinations of Glory to Rome, and all of the clones, improvements, and expansions, we now have a mind-boggling array of relartively complex card games to choose from. 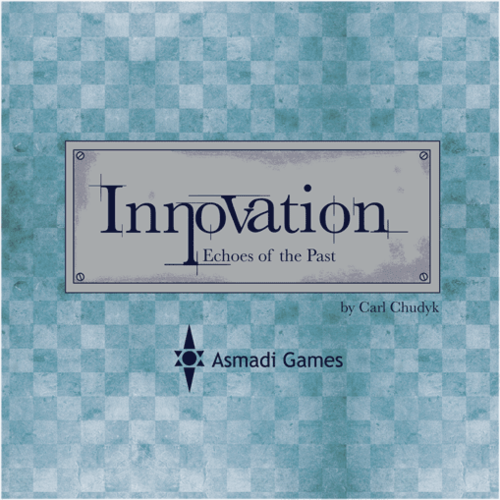 Enter Innovation, a contained system of one hundred cards, organized into ten groups (ages), six icons, and unique rules (dogma) for each card. Through a variety of stacking, storing, and sorting mechanics (splays, tucks, and draws) players attain scores and achievements. Innovation’s pseudo-civilization building narrative is highly abstract, yet it neatly models a process of unfolding complexification, all emerging from a fairly simple ruleset. It’s the mix of predictable and chaotic card synergies that it is the essence of Innovation. As such, Innovation stimulates a polarized response. Some players relish the chaos and enjoy the process of organizing the unpredictability into a winning strategy. Others bemoan the relative lack of control and wonder how much skill there can be in a game with such fluid boundaries.

Count me in as a great admirer of Innovation. I love games that feature emerging properties and unfolding layers of consequences. I find that Innovation rewards improvisational and creative thinking. Although there are some analytics involved, so often a player comes up with a clever solution to a seemingly insurmountable mess. Some people find order in chaos! In my view, that’s the great originality of Innovation and I think it’s one of the best of the new designs in card games. The play variety is astounding. The game is intense, but it doesn’t take itself too seriously and you are almost always surprised at how differently things turn out from one game to the next. In the last year I have played Innovation as much as any game in my collection.

Sure enough, none of these card game systems can sit still. We now have Innovation: Echoes of the Past, the first of what seems to be a suite of expansions. At first look I was skeptical. I wondered whether the relatively simple ruleset would yield to superficial complexity. The beauty of Innovation was its spontaneity, brevity, and versatility. Would more rules and cards needlessly complicate matters?

There are one hundred new cards. They have two important new features. Some cards have echo effects, boxes with instructions. They replace icons so as you splay your cards multiple echo effects might appear. When you take a dogma action, you precede it by implementing every visible echo effect. This can produce some interesting sequences. Some cards also contain bonuses, also replacing icons. They simply add to your score. There are now multiple ways to score, and multiple ways to have chains of cascading actions. There is a new action as well. To foreshadow a card means that you get to glimose it in advance and then store it for later use, a way to anticipate the future. Finally there are new achievements to be gained, mainly related to these new features. There are now ten achievements rather than five. In fact, some of the new cards offer alternative ways of gaining and scoring achievements. In a two player game, it now takes seven achievements (rather than six) to win. The new rules are not difficult to assimilate, but the new play dynamics take some getting used to.

My wife and I played Innovation: Echoes of the Past on a daily basis for two weeks. Our first few games were mainly spent familiarizing ourselves with the new cards and mechanics, and for awhile we wondered whether Innovation had lost its way. But by game four we were deeply engaged. Since then there has been no turning back.  All of our games have been very close and absolutely absorbing. The new cards are charming, clever, and interesting. The echo effects and bonuses add additional decisions to the mix. Do you play your newly drawn powerful card on top of a high scoring bonus? Do you aspire to develop chains of powerful echo effects in conjunction with icon specialization or do you go the generalist route, and gain strength in three or four icons?

Is this expansion an improvement? Is is a “must buy”? After two weeks of play, my assessment is that Echoes of the Past improves the strategic options, allowing for more planning, multiple victory paths, and more decision points. Chance are that if you are an Innovation enthusiast you will enjoy the expansion. However, if you line up on the side of the Innovation critics, I’m not sure this will change your mind much. The game is still chaotic, unpredictable, and surprising. You now have more control over your destiny, but maybe not enough to satisfy the strategic purists. Also, the game does take several more minutes to set up and takes a good hour (with two players) to play.

I do have a caveat. I have not played Innovation (in either form) with more than two players and I don’t think I want to. Althjough I can see how the partnership version might work, multi player versions (I assume) will transgress my own order/entropy tipping point, add too much time to the game, and generally require more effort than I care to expend.

I love Innovation: Echoes of the Past as a two player match. It’s easy to follow your opponent’s actions, it’s highly interactive, and the field of play (which can otherwise run away with itself) is sufficiently bounded. The expansion may not improve the game per se, but it does deepen and enrich the gaming experience.

Make no mistake. This is a superb expansion for folks who already enjoy the game. If you are a believer, than you should definitely check it out!

1 Response to Review of Innovation: Echoes of the Past