Rick has been gaming ever since he could move a pawn. In his early years he played the
usual American mass market games before moving onto wargames, which became an
obsession that continued through his teenage years. In his early twenties, however, work
took over his life and gaming went on the back burner. 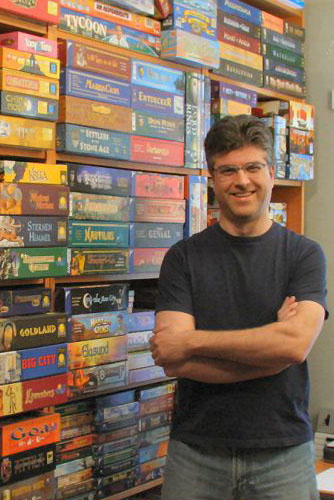 A decade passed before a fortunate encounter with GAMES Magazine introduced him
to the wonderful world of German games. He became obsessed and found some other
gamers in Vancouver who were just as obsessed. Together they formed the Terminal
City Gamers – the first German game group in Vancouver.

Rick’s obsession also turn him into a writer. He took over the editorship of the Terminal
City Gamers website and transformed it from a local game group site into a center for
daily news on the world of gaming. He moved his talents to the GameWire feature
of Gamefest – an online game store – and continued to report on the world of gaming.
In late 2005 he moved once again, this time to establish a brand new independent
game news website – Boardgame News. Rick was editor of BGN for one year before
relinquishing the editorship to move onto his current project – a book that will tell the
history of the computer game company Infocom.