Legacy: Gears of Time – A Preview

Legacy: Gears of Time is one of very few games to tackle time travel.  Unlike some previous games, it does a good job with the theme.  The game is not complicated, so I will try to summarize without covering every rule.

There is a timeline at the bottom of the board.  The timeline is broken into discrete timeframes, which are like sequential eras.  This timeline permits the placement of technologies (cards) under it.  The number of cards in a timeframe is limited by a sliding set of pieces that change between each of the four rounds, so in a four player game, you can only have six technologies in the first timeframe, five in the second, and so on.

Some technologies are fundamental and have no prerequisites.  You just play them and pay the cost by discarding the required number of technology cards.  In return, you get to place as many of your cubes on the technology as cards you just discarded.  Cubes determine who ‘owns’ that technology – majority rules.  Even if you play an technology and place a cube on it, as discussed below, someone else can come along and share it with you or take control away from you.  In this sense, just because you played the card does not mean you own that technology for the game. 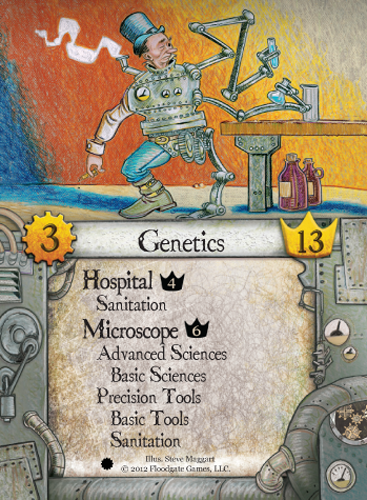 In the above Genetics card, you would need to give up three cards to play it and would get to place three cubes from your supply on it. When Genetics is scored, you would get 13 points.  Whomever has the majority of cubes on Hospital and Microscope would get four and six points respectively.  Majority for Sanitation is worth nothing because it is not a ‘direct’ prerequisite.  There is a handy tech tree chart on the back of the instruction book.

Do you see how this can get nasty?  If I control Genetics, Hospital, and Microscope, you might not want to put a cube on Sanitiation, so it could fail, thereby preventing me from getting points from all three higher, and valuable, technologies.  I might have a Sanitation card in my hand and plan to play it, or I might not and not have enough actions and/or be out of Influence cubes in my pool, in which case you have caused my Hospital, Microscope, and Genetics to fail.

The game is played four rounds.  In each round, each player has four turns.  Each turn is three actions.  At the end of each round, all players return to the present.  Then each technology is evaluated.  It must have three features to survive – at least one cube on it, all
prerequisites met, and not have an identical technology in an earlier timeframe.  If all prerequisites are not met, it is tapped.  If it is a duplicate technology or has no cubes on it, it is discarded and any cubes on it are returned to the player’s supply.

When it is your turn, you have three actions.  Each action can be any of the following,

1. Play an technology card in the timeframe you are in.

2. Draw two cards from the technology deck.  Keep one and discard one.  There is no hand size limit.

3. Place one or more influence cubes from your influence pool (not the supply) on one technology.

4. Move back in time. – Here is one of the twists.  You start the turn at a future period where you cannot play any cards.  You may move back in time to a timeframe where you can play an technology card.  You may not move forward in time with the exception of one of the six fate cards in the technology deck, so you must plan your moves ahead of time.  You don’t want to find yourself wanting to go forward in time within a single round.  At the end of each round, you all move back to the future and start the backward path again.

In addition, you may play fate cards during your turn, but doing so does not take one of your three actions.  The fate cards may only be played during a player’s turn, not during scoring at the end of a round.  These six cards are very strong and can cancel all sorts of effects or create new ones.  We played with them the first time, but might not use them the second time, as some of them have a definite ‘take-that’ aspect.  For example, the card below could negate the 13 points earned by a successful Genetics technology.  Fate cards only apply for one round and then are discarded, so they will likely come up again as the discard pile becomes the new draw deck.

There are a few other aspects to the game, such as players getting bonuses for achieving certain technologies, not being able to place an technology in an timeframe where that same technology has already been played, etc., but basically, it is a game where each player takes 48 actions and tries to have the most legacy points after four rounds.

1. I really like the idea of technologies being booted off the timeline if they have already been invented, if they have been forgotten (no cubes), or cannot be invented because a prerequisite does not yet exist.  It is not really brain bendy, but is strongly thematic.

2. The game is quite thinky and turns can take a bit both because you have to look closely at the timeline when it is your turn and you cannot play ahead, as the previous player’s move might change everything.

3. There can be a fair amount of min-maxing.  For example, is it better to build Sanitation, which might get you points for Sanitation, Hospital, and Precision Tools, or is it better to
just get points for the Internet, which scores more, but has a greater chance of failure.  I am not sure this game can be played casually, at least not with gamers.

4. Influence cubes turn the game into an area majority game where the areas you are fighting over are technologies.  You don’t have any influence cubes for the first round, so this kicks in later.  Area majority games, think El Grande, tend to have conflict.  This game does too.  I put two cubes on an technology to try to claim it, but someone else just put three on it and my efforts (two actions – moving to that timeframe and placing the influence cubes) were just wasted.  Yes, you can tell yourself that you cost that other player an extra cube or two, but really all that did is put all the other players in a better position relative to you.  Don’t go into this thinking it is a warm and fuzzy multiplayer solitaire Euro.

5. I like the art and the layout.  It really works for me in a sort of low-tech art for a high-tech game sort of way.  It makes the game a bit ‘warmer’ than the mechanisms might suggest.

6. The box is GMT quality (could withstand a direct mortar shell hit) and the bits are very nice.  I’ll admit I’m not a harsh judge of bits.  They all worked well.

7. The fate cards are brutal.  If someone builds a 6 point technology that will also be used as a prerequisite for another technology, so 12 points at scoring, you can make that
technology worth 0 points, thereby costing the player with the majority of cubes on that technology 12 points.  This does lead to a feeling of being targetted.  More an FYI than a flaw.  At the same time, it is super easy to either not play with the fate cards or to remove the ones you object to.

8. I am looking forward to playing Legacy: Gears of Time with 2 and 3 players to see how it changes. It felt a bit long with four players (2 hours).

I liked Legacy: Gears of Time quite a bit and look forward to my next play.  If you go in knowing it is an area majority game with a tech tree and cool one way time travel, you will
be well prepared for what is to follow.

Congrats to Ben and Floodgate Games on the very cool Legacy: Gears of Time!

I received a free preview copy of this game to be able to review it before Gen Con.