Well, this is the update where I don’t tell you about the new games coming to Essen… 2 flavors today:  1) A list, which will hopefully be updated regularly, of games that will be MIA at Essen 2012; 2) not-news about the new Hans im Gluck game, Die Paläste von Carrara. 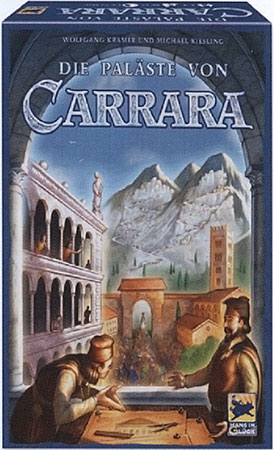 First: The MIA or not going to make SPIEL 2012 list

In years past, I have have focused on games that will making an appearance at Essen.  One of the other things I have usually tracked, but haven’t spent much time writing about, are the games that aren’t going to make it…  With the help of fellow OG-mate Jonathan Franklin, I’m trying to make an updated list of the games not making it to Essen in purchasable form.

The first set of entries was made 9/12.  I will try to append dates to any further entries as I update the list.  This certainly can be a community project – if there are other games that you know of that will not make Essen, post them in the comments and we’ll update the page as needed!

Second, I emailed Hans im Glück about their new Essen release, trying to get some advance information about the game. And the news I have to report is actually “not-news”!  According to Moritz Brunnhofer, Hans im Glück is specifically holding back information until the show.  This is the same strategy that they employed last year with Hawaii, and clearly it worked for them.  So, I wouldn’t expect much about actual gameplay until people get a chance to play the game at the Hans im Glück booth at Essen.  Moritz did give a little tease of information though in his email to me:

“The game will come in the big Stone Age box, as there is a lot inside. Out of the many components, it also will not be cheap :(. As usual it will be for 2-4 Players 10 and up. The length will not be that long, about 60 minutes. A bit, but not much more in the first game and absolutely different for experienced players. There it could end within 30min. or lasts up to 90min.
The clue is, that we will have a basic version and an expansion already included. We made the experience, that the basic version is absolutely needed, also (or specially) for “geeks”. The game is not complicated but it`s very complex to understand the mechanism working together. So we strongly recommend EVERYBODY to play the basic version at least 1 or 2 times before even opening the expansion. If you and me as “geeks” want to play the game more often we absolutely need the expansion but if we start with that we will be overwhelmed. We really hope that nobody will play the expansion in the first run, this group might destroy the game for them then…”

I expect to have more non-news later, but for now that’s what I’ve not got…
Hopefully back tomorrow with a few rules previews (real-life job permitting!)

Oh – and since I know that Ted won’t be reading this – you can help me win my bet against Ted by making sure that my developer diary has more thumbs than Ted’s designer diary for Suburbia.  If I have more thumbs by the end of the week, there will be a not-so-secret lottery for GG equal to the number of thumbs gained by my post.