At first glance, Trains seems like just another of hundreds of Dominion clones and it is, but it adds another dimension to the game with the addition of board play. I think of it as Dominion meets Winsome.

Like its predecessor, Trains comes with a lot of cards, about 500, so sleeving may take a while and I will probably since the card backs are a lovely black color which may wear easily. The cards are of a nice thickness and have Japanese and English on them. 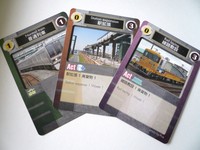 Cards have 2 values, one is the cost to buy the card and the other is the money which the card can provide on a player’s turn. There are 30 types of cards which are interchangeable for different games.  Some cards also provide player actions. The game also comes with some wooden markers. You use cubes à la Winsome Games to represent tracks. The board is 2 sided giving additional variety with Tokyo on one side and Osaka on the other. 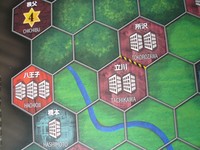 In this game, the train cards are essentially the money cards. You can use these to purchase other cards which may give you additional actions, such as drawing more cards or laying rail or placing stations and you can also purchase VP cards. You also gain points from building connections on the board to cities with stations and remote locations. More stations in a city give more VP. The number of stations are limited by the number of buildings in the city on the map. Player with the most VP wins.

There are 8 types of basic cards (more trains, VP cards, station expansions and rail laying cards) available and 8 types of random cards action cards available to purchase each game.
Shuffle the deck, draw a hand of 5 cards. Each player starts in a separate hex on the board. 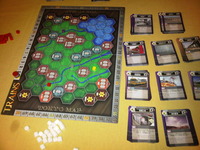 On your turn play cards which can be used as money or for actions. You can buy as much as you can afford and use as many actions as you want in any order.

When you build stations and rails you create waste. Waste cards don’t do anything but go into your deck and clog it up. There are cards like Landfill which can help you get rid of Waste cards or you can pass on your turn and return any Waste cards in your hand that round to the supply instead of your deck. If you build into hexes where other players have markers, you must pay extra cost and gain an extra waste. The different terrain hexes have different costs to build in as well.

The game ends when 4 stacks of cards are gone, all the stations are built or one player has used all their rails.

The first game was enjoyed by all the players (4). We played Tokyo, with one of the suggested set ups for beginners. The scoring was reasonably spread. The game doesn’t take long to play about 45 min seems right. 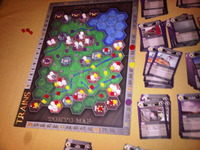 I liked the game quite a bit. The board play provides a nice additional way to score and some semi-cooperative play can net a lot of points. The Waste cards provide a hand management challenge but there are certainly lots of card types that may be in play to help with those.
I also played a 3 player game on the Osaka map with the suggested card set up. The game was very close and there was a tie for first with third only 3 points behind. 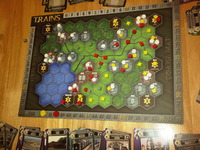 All the players gave Trains a thumbs up. Some comments from the other players were that the only downside was the card art, which was not easy to distinguish at a quick glance and that the card organization seemed a bit confusing initially. They liked the addition of the board and the VP there as an alternative to only having card points available. Some players felt that maybe you should have some penalty, such negative points for having too many waste cards. I felt like having to manage the waste was challenging enough.

Whether you are a Dominion fan or not, Trains is a very fun game which uses similar deck building mechanisms and the addition of the board makes the game play feel just different enough to stand on it’s own merits. The theme fits nicely. The game should see wider release at Essen 2012 and the designers have hinted an expansion board may be in the future.

Larry (2 games):  I enjoy this game and that’s in spite of not being a fan of deckbuilding.  In fact, Trains might wind up being the only deckbuilding game I like.  The board element makes all the difference and gives me a goal I can understand, as opposed to the “action/buy” elements in Dominion et al that I simply do NOT grok.

One thing I’ll note is that the board play is only vaguely related to trains, since scoring is purely about connecting to cities with stations.  There’s no pickup and delivery, true route-building, or anything like that.  So the train theme really isn’t that strong.  But this is still a very interesting game and I bet that a larger company picks it up and does very well with it.

Jonathan (2 games) – I am coming to the conclusion that I am not a deckbuilding guy.  I like the puzzles in Mage Knight and Friday is OK to kill time.  I like a few of the co-op deckbuilders including Shadowrift and Spellbound.  Trains is my favorite competitive deckbuilder, closely followed by Dash.  I find the map adds theme to Trains, even if it is mostly a scoring chart.  I like the card choices in the base game as well as the theme of the cards and map.  Unlike most train games, I am not sure that playing one map vs. another one really matters that much.  A strong like it.

Dale Yu (2 games) – OK, I’m biased, but I really like the deck-building genre, and I’ve tried to get a hold of every new deckbuilder to see what it adds or modifies to Dominion.  Admittedly, there has been a glut of deckbuilders lately, and I can no longer be comprehensive about playing them all – but I’m glad that I gave Trains a try.  The two interesting features of the game for me are: 1) the integration of Waste cards into the game, 2) the board play.  What I like about the Waste cards is the way that they enter your deck as a result of your play – unlike other deck building games where they are more of a deterrent played upon you by your oppInnents.  In Trains, your deck engine slows down as you build stations – and it’s a nice built in catch up mechanism.  It also feels better because it’s not a targeted system.  I’ve played two games now, each on a different board, and while there’s nothing groundbreaking in either board – it is nice to have something else to consider while playing a deck-builder – it’s not just about what’s in your deck.  Certainly, if you don’t have the right cards in your deck, you likely won’t win – but there is room for clever play on the board to perhaps make up for some less than stellar deck building.

Ratings from the Opinionated Gamers
I love it!
I like it.  Lorna, Dale Yu, Joe Huber, Larry Levy, Jonathan Franklin
Neutral. Nate Beeler, Jennifer Geske
Not for me…