Posted on February 4, 2013 by gamekahuna

Scripts and Scribes: the Dice Game

Scripts and Scribes: the Dice Game, is a dice drafting game with auctions to spice things up.  It is a game of accumulating commodities and winning auctions.  Money is spent to win some of the auctions, but in the end, the player with the most money wins.

In the original Scripts and Scribes, also released as Scriptorum and as Biblios, had dice, but you never got to roll them.  Instead, you used them to indicate the value of the commodities by adjusting them up or down.  The original game has two parts, the first part is the allocation of cards, creating hands of commodities and gold.  The second half auctions off cards that had been set aside in the first part.  After this auction, the majority holder in each commodity scores points equal to the face of the die showing at the end.  It is largely drafting cards and auctioning cards. 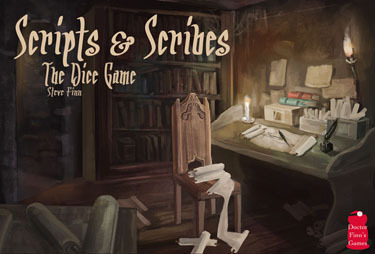 The major twist is that one of the dice, the money die,  determines whether the turn is a standard turn, in which dice are drafted, or whether a special action precedes the standard turn.  For example, if you roll 3 inkwells, 2 quills, and a book, the first player can take all the dice of a type, then the next player takes from what is left, etc.  In addition to the five commodity dice, there is also a die that permits you to adjust the values of the commodities.  Instead of taking, commodity dice, you can take this one instead and adjust as permitted. 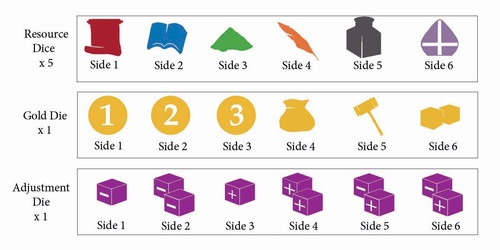 The money die has six different faces.  Three are money (1 gold, 2 gold, and 3 gold), which let you take money cards.  You can draft this die just like the commodities or the value adjuster die.  The other three faces permits the active player to reroll some of the dice, auction off all the dice rolled, or auction off gold via a Dutch auction where you give up the chance to accumulate a commodity in exchange for more gold.  .

There are other ways to make money, such as having a certain number of a commodity, much like in Medici.  In addition, there are multiple game end triggers, so it is never very mathy.   Once the end game is reached, the commodities are scored with player having the most of that commodity getting three times the die worth of gold and second place getting the die worth of gold.  You combine the gold you got at the end with the gold you have been accumulating and the most gold wins. 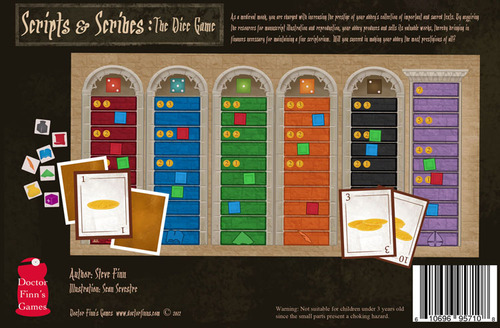 We enjoyed the game.  It offered choices and variety while being light enough to play after dinner and before homework.  The bits are nice, including the board, the rules, and the player summary.  Cards as money worked well and we played with the correction to the printed rules that there is no hand limit.

If you like dice drafting, stock markets, and auctions, this is definitely worth a play.  In an odd way, it is a cross between Scripts and Scribes and the non-existent Medici: the Dice Game.

BTW, Dr Finn’s Games is presently running a Kickstarter campaign for Steve’s new game Gunrunners.  Information about this game may be found at www.doctorfinns.com. From what I gather, it is an area control game that, like Biblios and S&S dice, is designed to be filler with easier rules, some luck, but some strategic choices.