POSTCARD FROM BERLIN #59: Games for the Visually Impaired

Posted on February 9, 2013 by jeffinberlin

Online game forums and reviews often mention color blindness and how that should affect the graphic design of a particular game, but not much has been written about designing games that can also be played by people who cannot see at all. In fact, outside a handful of companies who produce Braille versions of old standards such as Monopoly and Scrabble, most game publishers ignore this demographic altogether.

To be fair, adding Braille and other raised symbols to cards and components would increase the production costs of most games too much for the majority of consumers. Besides, visually impaired gamers usually have the tools to adapt the games to their needs themselves. Blind Jeopardy! champion and avid boardgamer Eddie Timanus gave several tips in an article for The Games Journal several years ago.

As both a game group organizer and a boardgame designer, I like to be as inclusive as possible.  After all, my goal for both endeavors is for as many people as possible to have fun together. And when I found out that friends of mine, one of whom is visually impaired, enjoyed playing games, I wanted to make one of my designs playable for them as well.

They had already adapted several card games using clear, stick-on Braille labels, but those games were relatively simple. My sons also discovered an adapted boardgame at their house during one visit: Alex Randolph’s Tempo, kleine Schnecke. The colored dice had raised symbols on clear labels attached for each color, and the board also had ridges to denote the racing lanes.  In addition, there were magnets on the wooden snails and a metal sheet under the board to keep the snails in place while feeling for the color symbols and their locations (Timanus uses white glue for denoting boundaries on game boards and Velcro dots to keep components in place).

It was interesting to think of my own published games in terms of accessibility–not to a specific age group or market niche, as I usually do–but to players who must process the entire game through their ears and fingertips. Because Braille takes up more space than printed text, the amount of information one can place on components is more limited. Piece o’ Cake, then, was the obvious choice to adapt for my friends, as there are really only two kinds of information on each slice:  the number of that flavor in the game (which also signifies that flavor), and the number of whipped cream dollops.

After enjoying a barbecue together at our house to celebrate our American Independence Day last July 4th, I presented them with a copy of the German version, Aber bitte mit Sahne.  They agreed to add Braille labels to the tiles so that I could teach them the game.

Then, on October 3rd, my family and I were invited to their house for the Day of German Unification. It’s been a holiday here since 1990, although most Germans don’t throw big parties to celebrate the occasion. But they wanted to return the favor for our July 4th barbecue, so the date made sense.

After a wonderful meal of hearty German cuisine, our friends turned on their stereo and played the song for which the original German version of my game was named: Aber bitte mit Sahne by  Udo Jürgens.

Then we broke out the game. As with their other adaptations, the Braille was typed on clear plastic labels and did not cover up the illustrations on the tiles. In addition, they had a “Lazy Susan” turntable in the middle of the table to place the pie each round. When it was her turn to cut, my friend could rotate the pie and read each slice easily with her fingers and avoid having to read any of the slices upside down. As she turned the pie and read each piece, she asked for reminders of who currently had the most of each flavor. The entire game was actually much more communicative, as we each announced aloud which slices were being uncovered when making the pies, and which ones each of us were collecting and “eating.”

After the first play of the game, our friends had grasped the strategy of it and insisted on a rematch. This, we followed with coffee and cake, of course (but since it was cheesecake, there were no whipped cream dollops). 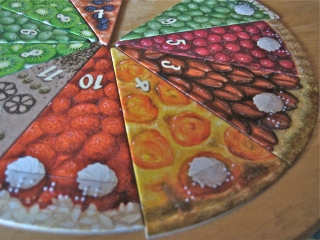 At the end of the day, they were excited to have finally played one of my games, and I was happy to have found a game that could be adapted to their special needs.

And, in the future,  I will certainly have those needs  in mind when I design a new game.

Jeffrey D. Allers lives in Berlin and has worked there as an architect and youth pastor. He is a published game designer and has been writing "Postcards From Berlin" since 2005 on GameWire, BoardgameNews and now, the Opinionated Gamers. He enjoys writing about game design and his experiences as an American expatriate living in the midst of German boardgame culture.
View all posts by jeffinberlin →
This entry was posted in Commentary. Bookmark the permalink.

2 Responses to POSTCARD FROM BERLIN #59: Games for the Visually Impaired