Awkward Moment and Buffalo: An End of Semester Reflection Paper
by Madison Vorgeben

It’s almost summer vacation! Em (that’s my BFF, Emily) and I have so many plans that I can’t even tell you them all. Of course, we’re going to ride her horse, Majesty, every day. He’s a beautiful chestnut morgan and he’s got this long flowing mane. I could just eat him up! Though not really. That’s gross. (I’m looking at you, people who eat horses – disgusting!) Also, we want to go swimming down at the river a lot and maybe go hiking, too. Just so you don’t think we’re some kind of health nut freaks, you should know that we also plan to get through all six seasons of Gossip Girl, and also maybe read the Harry Potter books again. Yes, I’m a total nerd and I like reading, even when I don’t have to for a class. So there.

Speaking of class, if I want to actually get into ninth grade I have to pass eighth grade first. And that means writing this stupid paper for my board gaming class (j/k – really, it’s totally awesome doing writing assignments when it’s sunny outside and I can’t imagine anything more fun). Mr. Beeler said we could write about whatever we wanted, but then he “suggested” I write a comparison and contrast of two games we played by the same company. I don’t know why he’s picking on me, since I heard him tell Tommy that he should write about some dumb games he played on vacation recently. That sounds a lot easier, but whatever. Let’s just get this over with. 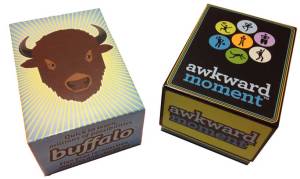 You see games, I see homework

The games I’m going to write about are called Awkward Moment and Buffalo, and they were made by a company called Tiltfactor (all the oh-so-mature boys giggled when Mr. Beeler wrote that on the board because they said it was easy to miss the “L” – har!). Like a lot of the games we played this year, I’d never heard of either of them before. But I’m pretty open to most games, especially social, casual, or party games (vocab words – bonus points!). One of the things I liked about both the Tiltfactor games was that their rules were each only one small page, so you could pretty much start playing right away. Some of the other games we learned in the class you had to sit there and listen to the teacher droning on about “play this card to your tableau” or “convert this cube into victory points” for like fifteen or twenty minutes sometimes. I’m not kidding. So both of these games started off on the right foot for me. But that’s pretty much where the similarities end. One of these games is totally great, and one is…not so much.

Not to spoil the surprise, but I totally love Awkward Moment. I even borrowed it from the class library a few times so the Blue Shoe Crew (Em, Hannah, Destiny, both Taylors, and I) could play it on the weekends. It’s great! To play, each person takes turn being the “decider”, whose job it is to pick the best reaction to an awkward moment.

What would Bieber do?

The decider starts each turn by flipping over a card from the awkward moments deck, which has all these crazy uncomfortable situations on them like “Kids at school have discovered an embarrassing old video of you as a little kid that your dad posted on YouTube” and “You see a popular clique from school together at the store when you are buying underwear with your mom”. ROFL! And now everyone else plays a card face down from their hand of reactions. These are things like “Sing your heart out like Taylor Swift” or “Unfriend them on Facebook”. Then the decider shuffles the reaction cards, still face down, and flips them over one at a time, reading them out. Everyone always cracks up at this part.

Once everyone stops laughing, the decider has to pick one of the cards that she thinks is the best reaction to the awkward moment. But there’s a twist! The decider isn’t always picking the answer she thinks is best, but has to pick the one that she thinks fits the decider card best. The decider cards have different things on them like “Most mature” and “Most likely to end in disaster”, and one is flipped up at the start of the round with the moment card. It can be strange trying to think in such weird ways, but it’s a lot of fun to try. I think all of us have gotten pretty good at it, except Taylor B., who pretty much always picked any reaction that had The Hunger Games or Katniss Everdeen on it (she totally loves those books). Finally, the person who played the reaction card that was picked by the decider gets to keep the moment card as one point. In theory, whoever has the most points after playing a few rounds is the winner. But we never keep track of points, and we never stop after just a few rounds. We just keep playing and playing until we run out of cards, and sometimes we shuffle them and start again.

It totally sounds complicated, but it’s not at all. I played it with my family and even my stupid little brother, Howie, could figure it out, though he made fun of the game (and me for loving it) because it’s all about stuff teenage girls would like. Whatever. I *am* a teenage girl and I think it’s pretty funny. And the game is very unique. There has never been a game like this ever before. I should know, too, because I’ve been playing games all semester, so I’m pretty much an expert now.

I guess I could also say that the other game we played from Tiltfactor, Buffalo, is also pretty unique. But that’s where the similarities end, I promise. Buffalo is a game where you flip over these cards that have descriptions and categories on them and then try to shout out a character or person that fits the descriptions on two or more of the cards. If you shout first, you get to keep all the cards that are a fit for that person. This would often lead to a lot of arguing, though. Like when a certain jerk in our class (cough…Colby…cough), who cared a lot more about the game than the rest of us, would make these stupid claims like that Peyton somebody is not only rich and an athlete but he’s also handsome, type A, and brave, just so he could get more cards. I’ve never even heard of this Peyton guy, but I’m pretty sure just having a white football jersey shouldn’t get you the “white-collar” card like Colby argued it should. Anyway, the next thing you do is, after there is a long pause or all the cards are gone, you flip up two more cards and keep going. Sounds fun, right? Probably it is if you’re like some kind of Albert Einstein or something. There are I think four hundred cards in the game, so things get pretty obscure pretty quickly. I mean how many androgynous people of any type can you name let alone ones that are also biologists? Maybe Lady Gaga, if s/he does science in her spare time. Or what about cynical socialites? Cherubic secret society members? Filipino chess players? These are all real cards in the game. How about naming any oceanographer ever? Well, Mr. Beeler said he knew a few, but that’s not fair because he’s so old. And plus he could have been making them up just to cheat (we’d never know). The rest of us who aren’t named Colby mostly just sat there and tried not to get caught texting each other.

To make things worse there are these buffalo cards mixed into the decks. If a person could name a person or a character who fits all the categories on the table they got to take any buffalo cards that came up as well as all the cards their person matched. More cards are more points, so that’s a good thing if you care about winning the game (we didn’t). But after you have something impossible like “anthropologist” on the table, no one ever cleans up the whole lot, and the buffalo cards just start to overrun everything. Really stupid. According to the rules, the game is supposed to end when you go through all the cards. Do you know how long that would take? I don’t, because we stopped when class was over and we still had a long way to go. Thankfully, Mr. Beeler could see we weren’t having any fun and took the game home to his private collection so he could play it with other old-people friends of his, like our pervy principal Dr. Yu. Good riddance!

A horse out standing in his field.

So there you have it. Two games by one company, but they are clearly not the same. Awkward Moment is great and hilarious and I love it, and Buffalo is also a game that a person could buy. There goes the bell. Majesty, you sweet thing, here I come!

Nathan Beeler: I had the opposite experience to Ms. Vorgeben, which I suspect would be typical of these games for people who aren’t young girls. Buffalo (designed by Mary Flanagan, Sukdith “Sukie” Punjasthitkul, and Max Seidman), while being very similar to a game I quite like, Cineplexity, offers a fun enough experience to warrant occasional play. I do think the Buffalo cards are completely useless, though, and the decks should either have been trimmed down by half or edited much more closely. Even in groups of adults there were individual cards that no one could name more than one person to fit, let alone the many people you’d need for the game to truly sing. Because of that I have to dock the game’s rating a bit. But it’s fine for what it is.

Awkward Moment (designed by Zara Downs, Mary Flanagan, Andrea McClave, Sukdith “Sukie” Punjasthitkul, Viviana Ramos, and Max Seidman), however, is just an Apples to Apples variant for middle school and high school girls (even though you have to go to the website to find this out – the box in no way tells a prospective buyer that the content is so specific), and is thus not meant for me. I can imagine if I was a teenage girl I’d probably go for the game, like Madison does. But those of us that have a Y chromosome or who don’t spend any part of our day in home room should probably avoid this one studiously.

Nathan has decided never to grow up.
View all posts by nathanbeeler →
This entry was posted in Reviews and tagged board games, Family games, Imaginary Reviewer, reviews. Bookmark the permalink.