Steve Finn has designed several clean elegant games in Biblios and Scripts & Scribes: the Dice Game. Can he do it again? Let’s see. 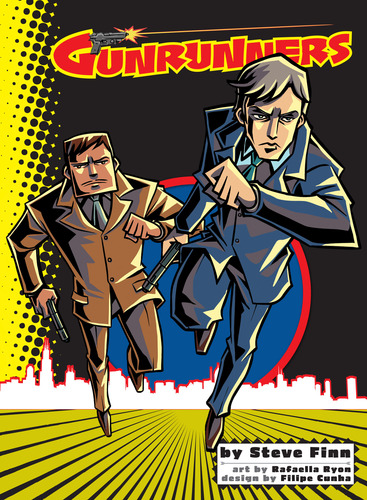 The players are running intelligence agencies deploying their agents to global hotspots in the hope of stopping the gunrunners by confiscating crates of weapons. Even if this theme is unengaging to you, keep reading, as the game itself should capture your interest. Just imagine that there is something in those crates that you want and you want to keep others from getting.

Each player starts with an identical deck of cards. Of your deck of 14, you draft 5 randomly. These cards represent agents you have available to send to the field to stop the bad guys from selling guns. The goal of the game is to confiscate the most crates of guns. You do this by having superiority during a bust. After 7 busts or everyone runs out of cards, the game ends and crates are counted.

Each game turn has four phases with the start player rotating each turn.

Phase 1: Bad Guys Deliver Weapons – a hotspot might be seeded with crates or the crates might go to the warehouse for delivery on a later turn. This is determined by a die roll. 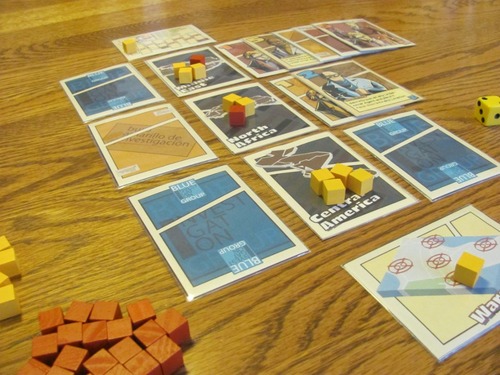 Phase 2: Deploy an Agent: As you can see above, the hotspots are laid out vertically. Note that there is one face-down agent to the left of the hotspots. This agent is ‘probationary’ and is learning the trade.

To deploy a Probationary Agent, you convert another player’s probationary agent into a field agent by flipping their card face up and moving from the left to the right of the hotspots. You then get to place one of your agents, face-down, in the probationary spot that was just vacated.

To deploy an Undercover Agent, you place a card from your hand face down on the right side of a hotspot. You can only do this if you have no other undercover agents or in a special case described below.

You must deploy a probationary or undercover agent. After doing so, you draw a card, so you usually have five agents available to choose from. 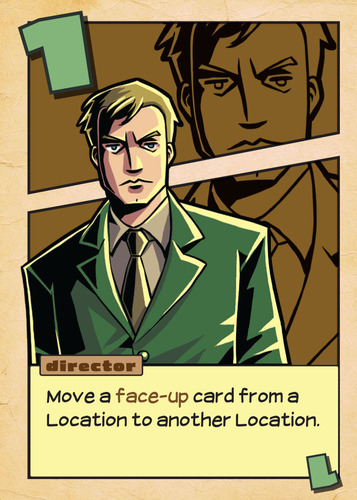 Phase 3: Special Operations: Most of your agents are fairly boring. They have a strength of 1 through 5, with lower numbers being more common. However, some of your agents have special abilities, such as being able to place a second undercover agent, peek at an undercover agent, or moving an agent from one hotspot to another. These abilities only apply if the agent was probationary and it was revealed by another player and placed in the field. If you place an agent with a special ability as an undercover agent, you lose the ability to use their special power. You get to use the special power of your revealed agent only after it has been revealed and that player has completed the deployment phase.

Phase 4: The Bust: If there are four face up cards to the right of a hotspot, there is a bust. All face down cards to the right of the hotspot, not the probationary agent, are flipped over and the crates at that location are allocated with the highest total agent strength getting half the crates rounded up, then moving down with each player present at that location taking half of what is left rounded up. There may or may not be crates remaining at that location. Two crates are moved from the supply to the location that was just resolved and an additional crate is moved to each other location. The Bust Tracker is then moved up by one and play continues.

That is pretty much it. The game is very clean and the rulebooks is very clear and well written.

The art is a distinctive primary color palate plus black, evoking a noir-ish feel and giving the game visual punch.

The game would be fine as a main course for non-gamers or an opener for an evening of games. It has enough to think about, but not so much that thinking twice as hard will yield a noticeably better result. Scores are quite close and if you don’t like the theme, it really does not get in the way of the underlying crate collection theme. It could just as easily be about hitting three or four stands at Essen for boardgames.

Kickstarter games have been fairly knocked for not being finished or polished. I promise you that this game is Finnished and ready for play!

Want to know what is in Steve’s next crate?  Check it out here: http://www.kickstarter.com/projects/337407318/capo-dei-capi