In the interest of truth, justice & the American Way, I need to start this review out with a disclaimer: I’m a huge fan of Geoff Englestein, both as a designer (The Ares Project, Space Cadets) and as a podcaster (Game Tech segments on The Dice Tower, Ludology). So I approached Space Cadets: Dice Duel with a great deal of anticipation…

…and I was not disappointed. What is promised – a 30 minute game of frenetic real-time warfare chock full of dice for two teams – is exactly what the game delivered. Well done, Geoff & Sydney (Geoff’s daughter, the co-designer on this project).

Crash Course in “State of the Art” Spaceship Design

The heart of both Space Cadets and Space Cadets: Dice Duel is the use of stations to run the various parts of your spaceship. By solving various timed puzzles (Space Cadets) or rolling dice (Dice Duel), your team works accomplish your mission.

The stations in Dice Duel are:

In 8 player games, each team a non-dice rolling Captain – whose job is to watch the enemy and the “big picture” of the battle stations – and then give appropriate orders.

There are a few twists – certain locations on the map contain crystals, which can be transported aboard via tractor beams and then spent to use various special powers. As well, the map contains nebula & asteroids (randomly placed by the players at the beginning of the game) that play havoc with your shields and sensors if you move through them.

Damage is pretty simple – and brilliant. Every time your ship takes a hit, you lose one Engineering die. So, when you take damage, you also reduce your ability to power up your stations – just like Star Trek! If you are unlucky (or unskilled) enough to take 4 hits, you  head out of this sector of the galaxy, licking your wounds & plotting your revenge. (You can bellow “Wheaatonnn!” if it makes you feel any better – but that usually is more effective if one of your opponents is actually named Wheaton.)

One of These Things Is Not Like The Other

While there are shared design elements with the original cooperative game, Space Cadets (enough that there are rules in Dice Duel for using mapboards from the first game), this is decidedly not the same game.

First of all, Space Cadets: Dice Duel is not cooperative. It is played in teams of 2-4 players each – but each team is working to control this sector of space by damaging the other ship enough to force it to turn tail & run. (The way the rules work, that’s 50% damage to Engineering… evidently, your team’s version of Scotty can’t find any more dilithium crystals.)

Second, it’s substantially shorter in playing time. While Space Cadets normally clocks in around 90-120 minutes (depending on how lousy your group doing at beating the game system), Space Cadets: Dice Duel is consistently 30 minutes or less.

Third, it’s easier to teach. The iconography on the dice & boards is very clear and makes the game easy to learn. The only game element that’s difficult to work out (in your first game)  is shooting the other ship… and that leads to my only real complaint about the production of the game. It would have been really nice to have a small cheat card/sheet to give a quick flowchart of how combat & cleanup works. (It’s a minor complaint, mind you.)

While I enjoy Escape: The Curse of the Temple and love Vlaada’s Space Alert, both games require a soundtrack to “officiate” the game – and that makes them entirely unsuitable for convention play for those of us who listened to too much rock’n’roll on headphones and/or those of us who want to respect the people playing games around us.

Space Cadets: Dice Duel uses the other team as the timer/motivator – meaning you don’t need a portable boom box in order to have a great convention (8 players!) gaming experience.

BTW, the box says “30 minutes”. Evidently, we are either (a) quicker to pick up the nuances of dice-rolling & gameplay than your average gaming group, or (b) stupid enough to get in a firefight without running away.

This fact is yet another reason it makes a great convention game – you haven’t committed the rest of your precious “I should be lining up for the flea market in order to snag games I probably shouldn’t buy” time when you jump into a 30 minute game.

It also makes it a great closer for a game night – or an opener (as you can add players who know the game pretty easily – just slide over and let them take over a station). 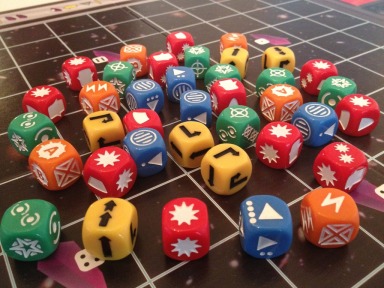 3. I think there are some actual meaningful decisions to be made… this isn’t just “who can throw dice faster & without sending them flying off the table and across the room?”.

The mix of dice in the game and at each station keep you from doing everything you want – so you have to prioritize. Do you take a chance of leaving your shields down in order to fire two torpedoes at long range? Or do you push your shields to max and sacrifice your ability to harvest crystals via the tractor beam?

The more I’ve played, the more I’m working on developing a crucial game skill – watching what the other team is doing. Taking shots when your sensors are jammed is a waste of a lot of time & energy – but we’ve managed to do it at least once each game.

Now, I know that the box clearly states that this game is for 4-8 players… and I certainly see the appeal in the unbridled chaos of 8 people trying to talk over each other while rolling dice as if their lives depended on it. But the system is robust enough to work as a 2 player game with each player controlling a side (and all the corresponding stations).

It’s mentally taxing, mind you – keeping all 7 stations straight in your head and deciding what you’re going to do. But I can tell you from experience that is works. With three players, we play 2 vs 1, which isn’t as out of balance as it might sound, as the 2 player team sometimes runs over each other trying to send dice to their own stations.

When you go to Walt Disney World, there are signs before certain rides warning you of potential problems & safety issues. The text to the Mission: Space warning sign at EPCOT reads:

During this intense astronaut training mission, you will experience the turbulence and G-forces of launch and re-entry, and the disorientation that often occurs outside the Earth’s atmosphere. Those who are made uncomfortable by enclosed dark spaces, simulators, spinning or loud sounds should bypass this experience.

As much I enjoy Space Cadets: Dice Duel, it could probably use something similar.

During this intense space combat board game, you will experience the turbulence of substantial amounts of dice rolling, the G-forces of the personalities of the other players on your team, and the disorientation that often occurs when playing a real-time game. Those who are made uncomfortable by the lack of turns, buckets of dice or getting an adrenaline rush while playing a board game should bypass this experience.

There might need to be a small print addendum for people wanting to complain about box size. (Sigh… would you like a little cheese with that whine?)

For some of you, the next bit of information is a warning – for others of us, it’s like a siren’s call: there is expansion potential baked into the game design already with three of the station dice containing symbols to be used in a future expansion. (Here, Geoff, take my Federation credits now – they’re burning a hole in my pocket.)

One final “warning”: if you’re not bothered by the things listed above, “set your phasers on stun cause this game is ahead warp factor 9!” (Apologies to William Shatner & the cast of SNL.) Translation of preceding sentence for non-Trekkies: if you enjoy real-time games, Space Cadets: Dice Duel is a great game design and very enjoyable to play.

follower of Jesus, husband, father, pastor, boardgamer, writer, Legomaniac, Disneyphile, voted most likely to have the same Christmas wish list at age 57 as he did at age 7
View all posts by Mark "Fluff Daddy" Jackson →
This entry was posted in Essen 2013, Reviews and tagged dice, Essen 2013, reviews, Stronghold Games. Bookmark the permalink.