I’m following in Dale’s footsteps here – and he has a long blurb on the start of his posts that explains his logic (which is sound) and intentions (which are good).

We’ll just skip that & get to the game previews – both from Hobby World, the Russian company who brought us my much-beloved Septikon – Uranium Wars. 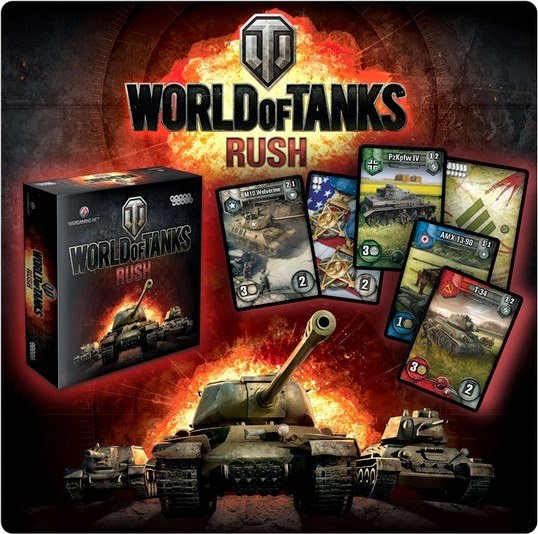 Game Idea: Be awarded the most medals for destroying enemy tanks, capturing enemy bases & satisfying certain achievement awards (which work a bit like goals in Race for the Galaxy). It’s a deck-builder in the mold of Ascension with the changing tableau of draftable vehicles. The cards in your three card hand can be used:

You can only make one assault per turn – and all tanks in your assault must be from the same nation. (There are four in the game: Russia, Germany, France & the U.S.) Medals & bases clog up your deck while giving you endgame points. The game ends when one player loses all three bases or one set of nation medals runs out.

Thoughts: While there are problems with the rulebook (we had to house-rule the replenishing phase of the card tableau), the game is solid. This is not a difficult deck-builder – in fact, I think you could position this as a family-friendly introduction to deck-building. With three games under our belts, I think there may be a little more game here than at first blush – the achievement cards are worth enough to swing the game if you pursue them… and it’s easy to get distracted by beating on the other players. 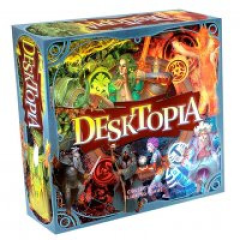 Game Idea: Released in Russia this year with a name I can’t spell or pronounce, Desktopia was demoed at Essen 2013 (and at GenCon 2013) with plans for a Kickstarter campaign for the international version in January 2014. It’s a flicking combat game in the vein of Catacombs – except that the theme is delightful & different (you are actually tiny factions fighting over the surfaces & obstacles of the Giants – aka: humans! – with the options to use real objects such as books or pencils or glasses as terrain) and the factions each have very different powers & capabilities. There is an extensive book of scenarios & campaigns already included in the box – and obvious room for expansions and roll-your-own scenarios.

Thoughts: If you don’t like flicking games, this isn’t going to change your mind – but if you enjoy them, there’s some neat stuff in here. Accuracy & finesse is rewarded (there are penalties for knocking pieces off the battlefield) and you’ll need to combine your spells & passive powers along with your flicking prowess in order to win.

follower of Jesus, husband, father, pastor, boardgamer, writer, Legomaniac, Disneyphile, voted most likely to have the same Christmas wish list at age 44 as he did at age 14
View all posts by Mark "Fluff Daddy" Jackson →
This entry was posted in Essen 2013, First Impressions and tagged Essen 2013, Hobby World. Bookmark the permalink.