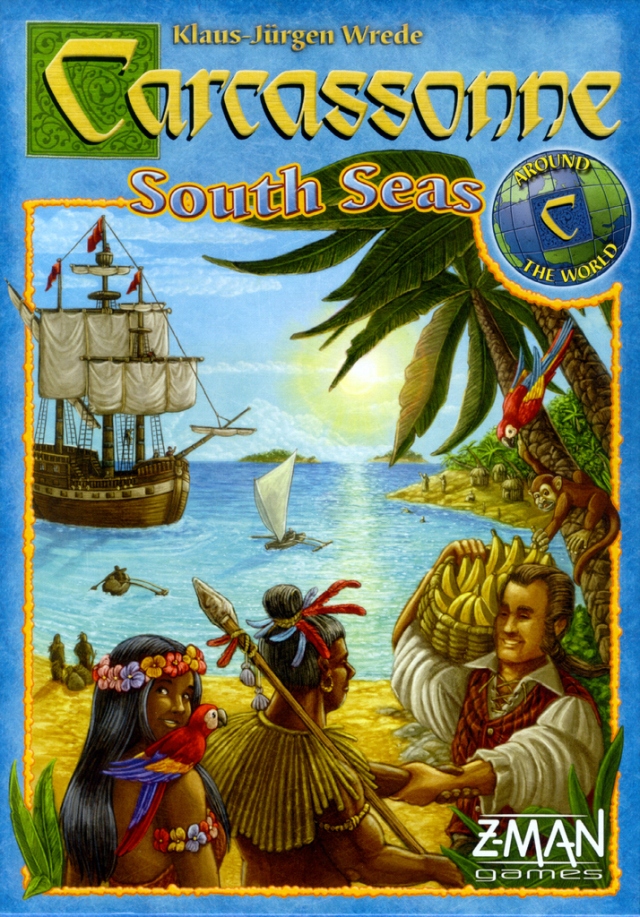 Carcassonne is one of the enduring franchises in our hobby – like death, taxes and controversy over the SdJ nominations, one of the things you can usually count on each year is a Carcassonne expansion of some sort (as well as Settlers and Bohnanza!).  In recent years, some of the expansions have felt a bit tacked on (i.e. the Catapult) – but the most recent addition breathes some new life into the franchise.

Carcassonne: South Seas (C:SS) is a standalone expansion.  It takes many of the features that you are already familiar with with some new rules tweaks to give a very different playing experience.  The box has an “Around the World” icon on it – “Carcassonne around the world takes you on a fantastic trip to see the world’s most beautiful places and introduces you to new aspects of this modern classic.”  Based on this quote, there appear to be further similar expansions in the pipeline.

But, back to the game at hand.  C:SS is primarily a tile-laying game. (Duh.)  The tiles have seas as the background.  On the seas, you might find islands (i.e. settlements), bridges (roads) and markets (cloisters).  Other than different names/graphics – these elements work the same as in the base game. 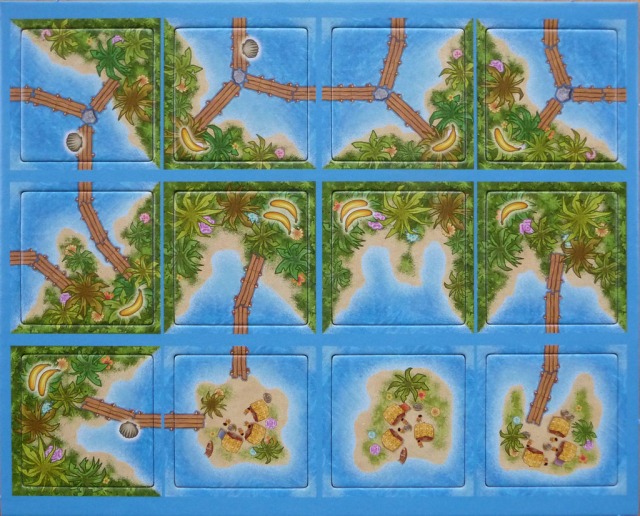 However, the tiles do have some added elements that differ from the parent game.  On each island, you will find some areas with banana icons.  Next to some of the bridges, you will find seashell icons.  And finally, in some of the sea regions, you will find fish icons.  There are also wooden tokens that match these bananas, seashells and fish – both small (worth 1) and large (worth 3).

side of the box with wooden bits pictured

On each turn, you start with the same basic choices as Carc – draw a tile, place it legally – so that all the features match up, and then you may do something with a meeple.  In C:SS, when you get to the meeple phase, you have the choice of playing a meeple to the tile just played OR, if all of your meeples are on the board, you can choose to take one off the board and return it to your supply.  When you do this, you do forfeit any scoring that could have come from that placement.  If you are placing meeples, the usual rules apply – you cannot play on a feature that another meeple is already on, etc.

After the meeples phase, you then look to see if any board features are complete.  If so, there is an additional scoring.  If a bridge/island/sea region is completed, the owner of that thing gets seashells/bananas/fish equal to the number of icons pictured next to that feature on the board.  The appropriate number of wooden tokens are taken from the supply.  If a market (cloister) is completed, the owning player is able to take a ship marker – these will be discussed in just a second – without having to turn in any goods.

The sea regions can also be scored in a second way.  Some of the sea tiles have fishing boats pictured on them.  Each time that a fishing boat is added to an occupied sea region, the owner of that region does a scoring, but then that player must cover up the largest group of fish in that region (so that those one or two fish will not score again in later scorings).

At the end of your turn, you now have the chance to buy ONE ship marker.  There are 4 markers available face up at all times.   On the sail of the ship, you see icons or patterns telling you what wooden goods you can return to the supply in trade for that ship marker.  The ships are worth between 2 and 6 VPs – and these ship markers are the the major way to score points in C:SS. If a ship marker is purchased (or collected from the completion of a market), and new one is drawn from the supply so that there are always 4 face up to choose from. 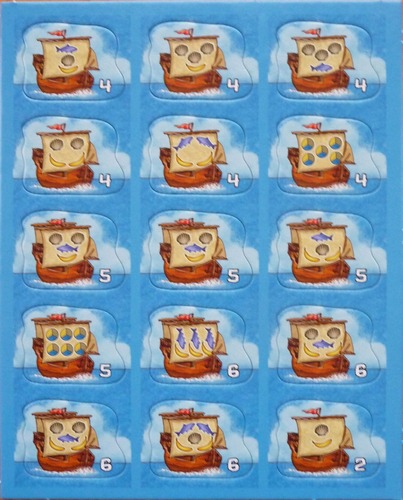 Tile sheet with some of the different VP ships

The game ends when the last tile is placed OR the last ship marker has been collected.  At that time, there is a final reckoning of the board.  All incomplete bridges/islands/sea areas are scored as if they are complete and the appropriate wooden tokens are collected.  Unfinished markets are worthless.

Scoring at the end of the game are:

2) 1 VP per each 3 remaining wooden tokens

The player with the most points wins the game. 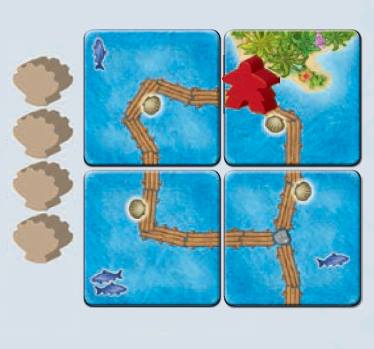 I have enjoyed my four plays of Carcassonne.  I have always loved the base game, and it has been hard to get it to the gaming table in the past few years.  However, the expansions do usually cause a spark of interest in the game again, and this one is no different.

I like the new system here – this takes the basic Carc rules/ideas that most gamers are familiar with and superimposes them on a resource collection game.  Unlike the regular game, just controlling a finished feature isn’t enough to score points.  Now, you need to collect the wooden tokens and then later turn them into ship markers.  As you can only see four of the ship markers at time, and they have different values of points, it makes the game much more strategic.

The change in scoring also changes the way that the board is built.  Unlike the base game, there really isn’t much reward for building the longest road or city that you can.  In this game, you generally want to close things off whenever you can so that you can get the wooden tokens in hand to use for ship buying.  At the end of the game, each 3 wooden bits is worth a VP, but if you trade them in for ships, each wooden bit is worth about a VP on its own.

Markets (cloisters) also are more valuable than in the base game as they give the owner a free choice of available ships, so this can often be 5 or 6 VPs in a game where VPs are hard to come by.  In our games, opponents have been very reluctant to help others finish a market because of the high payoff.

My only beef with the game are the wooden tokens.  The game provides two sizes of tokens (small/large) that are worth 1 and 3 items respectively.  However, the tokens are the same color/shape and the difference in size is not significant.  We had a lot of problems distinguishing the small from the large at times, especially when trying to glance at an opponents group of wooden bits from across the table.  I would have liked the bits to be a little more distinct to reduce this confusion.

Doug Garrett – As my students might say, “Meh….”  The wrinkle of set collection is interesting, but given the limiting factor of only 4 ships available, you can find yourself very lucky with ships you can immediately fulfill, or working hard to get particular items only to have the ship taken before your turn.  Shel and I play Carcassonne almost exclusively on the iPad at this point, so I don’t see us pulling this one off the shelf anytime soon.  It’s innocuous, and the Carcassonne junkie will like it.

Ratings from the Opinionated Gamers: