Well, this was supposed to posted from my phone while I was at GenCon, but due to some unknown phone failure/gremlin, my report never posted from the WordPress app.  To make things worse, the whole report disappeared – so I’m having to reconstruct this from memory – because as I was writing on the fly, I didn’t take many other written notes!  Ah – the first world problems of trying to use modern technology in real time…

As usual, I had a single day to devote to GenCon – fellow OG writer John Palagyi and I jumped in the car early and made it to the convention hall right around 10am – theoretically in time for the opening of the dealer hall.  For once, though, the organization of the GenCon volunteers was less than stellar. The line to pick up badges was all the way down the hall!  It took me 20 minutes to just get to the desk to show my ID and pick up a badge.  It appears that there was a little snafu on how to process the press badges, and this gummed up the line severely.  Of course, being GenCon, about every three minutes, someone stopped by and asked “What are you in line for?”.  Because, people love waiting in line at GenCon.

To wit, once we acquired our badges and headed it, we were forced to thread through lines everywhere in the hall as gamers patiently awaited their chance to throw money at companies to get the new releases.  Paizo, Fantasy Flight, AEG and IELLO all had long lines that snaked through the corridors of the dealer hall.  In some places, you could barely get through as two lines were right next to each other.  Some of the congestion eased later in the day when Paizo’s line ended up located outside the dealer hall. 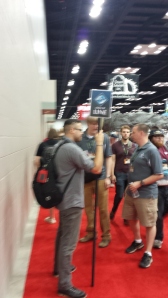 yeah, this guy stood there all week and got paid just to show people where the end of the line was

First stop was the Bezier booth – one of the games that I’ve been working on, Subdivision, was making its debut at the show.  Designer Luke Hedgren (also an OG writer) was there showing off the game.  It‘s a tile-drafting, subdivision building game that was well received.  The Gencon allotment sold out during the show, so that’s a good thing!

sorry – early watch pictures were blurry. they will get better (i think)

IELLO was very crowded with their new games.  King of New York seemed to be the big draw, though they had five or six new games at the show.  Also new to me were Shinobi Wat-aah! and the beautifully produced Night of the Grand Octopus.  Also got to meet with the folks from Le Scorpion Masque who had a new party game, Think Again! at the show. They also had Friday the 13th which is a remake of the old Knizia classic, Poison. 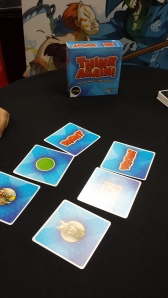 Love the art on this one!

Guardian Chronicles was not at the show, but IELLO tells me that it should be ready by September for purchase.  They also have a new kung-fu themed game called Masters Revenge that looks to be a good one.  More info on that as it becomes available to me.  The last big game that IELLO was working on is an “augmented reality” game called Yo Ho where people use their smartphones as their dobber.  As you drive it around the board, your phone (via an app) gets specific information that only you can see and use in the game.  I am looking forward to getting a better look at the updated prototype of this in Essen.

A big surprise for me was Passport Game Studios.  I know that Rob has been trying to bring in some good European titles.  I was definitely stopping by to pick up a copy of Antoine Bauza’s new coop game, Samurai Spirit.  What surprised me were two new-to-me Italian titles that I’m looking forward to playing: Kingsport Festival (which looks to be a re-boot of Kingsburg) and Provincia Romana, a game that looks to be based around city building in ancient Rome.  Both of these Italian titles are from Stratelibri, and it seems like they now have a set up for US domestic distribution.

Mr. Bauza signing a box for my brother

Stronghold Games had a new trick taker, Diamonds.  Also of note, they appears to have struck a deal with the super nice guys from Artipia Games, out of Greece.  A few of the Greek releases were for sale at the Stronghold booth, and they quickly sold out.  While I’ve usually gotten my hands on the Artipia games at Essen, this deal will hopefully help gamers here in the States get their own copies a bit easier.

We braved the line for a few minutes near Paizo, and we chated with Mike Selinker, one of the co-designers of Pathfinder.  I’m more excited about his new book, The Maze of Games, than Pathfinder, but I haven’t yet played the newest incarnation—I look forward to getting a chance to do that in the next month or so.

Tasty Minstrel was there with a prototype version of a new Feld Game, Aqua Sphere… It looks interesting indeed – I am looking forward to this one being completed.  There was also a quick playing 2p version of Eminent Domain

Queen was busy, with the new Donald X. game, Greed, selling well.  The big box of Fresco was moving quickly, when we arrived on Thursday, the stack was already quite depleted. They also had some print proofs of the new Essen releases, and I’m definitely looking to try these out in October…

Had a quick chance to stop in to say hi to Sophie at the Filosofia/Z-Man booth, or should I say the F2Z booth – apparently they are reorganizing their company under a single name.  They did bring in a few copies of Camel Up! (the recent Spiel des Jahres winner), and I think I saw the last one purchased as I was at the stand about 2pm on Thursday.

Finally, off to the Asmodee press event – which was a whirlwind tour through about 10 new games in 2 hours…  Additionally, it did give me a chance to try the official beer of GenCon 2014, The Froth of Khan, which was a tasty coffee based beer. 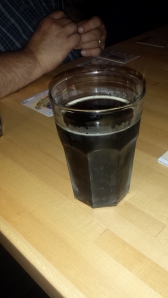 Builders 2 Antiquities (Bombyx) – engine building card acquiring game where you use your three actions each turn to get building blocks or build antiquities using those resources. The resources are provided on worker cards, and the key seems to be getting the most efficient source of builders that match your needs.

Elysium (Space Cowboys) – probably not out until 2015.  A cool card drafting mechanic here.  Each round, you have four color options available to you.  On your turn, you are able to draft a card from the market – each card can have between one and three colors it is associated with.  Once you draft a card though, you then flip over one of its colors from your display.  This then limits which cards you are able to draft in future turns that round.  Each game will be different because the overall card supply is determined from four or five decks drawn out of a supply of at least eight decks.

Colt Express (Ludonaute) – a fun little romp where players act as thieves trying to steal from a train.  Using a programmed set of actions (placing action cards into a stack), players try to move around the train to get loot.  Meant for 2-6 players, should play in under 30 mins.  Definitely much lighter than the previous Ludonaute release, Lewis and Clark. 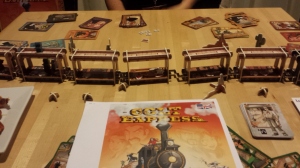 Room 25, ver 2 (Matagot) – a new release of Room 25, an escape the maze game.  The original version didn’t get a lot of press because it suffered some delays and came out “off schedule”.  The game is made somewhat more versatile by having three different modes of play. 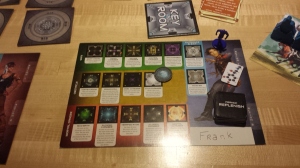 Sun Tzu (Matagot)  – a remake/retheme of Dynasties, a really good game from Al Newman that was previously released in the US by Jolly Roger Games.  I still have my copy of the original version, but the new artwork is great and hopefully this version will get a more widespread release/distribution with the Asmodee engine behind it 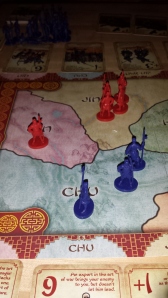 Zombie vs Cheerleaders (Matagot) – a tower defense style 2p game.  I’ll admit that I pretty much turned off for the rest of this game demo as I have no interest in this sort of thing, either on my phone or in person.  The graphics are good and I think the theme alone will attract gamers to this one. 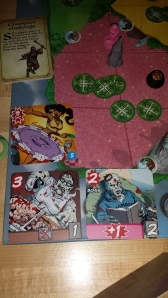 Nations the Dice Game (Lautapelit) – I really liked this streamlined dice game.  You roll 5 dice, use the icons on the dice to collect stuff from the board. You might be able to pick up more specialized dice that give you more icons.  4 rounds in the game.  Should take about 20 minutes to play.  From what I saw, this has the potential to be a big winner for me.

I love me dice games. I love me civ games. Bazinga!

Ryu (Moonster) Resource management game where you work to collect the right combinations of cubes in order to build your own mechanical dragon.  We were a bit rushed in our demo of this as we started with only 5 minutes to go in the allotted time schedule for the event.  I’ll have to look at this one again in Essen… 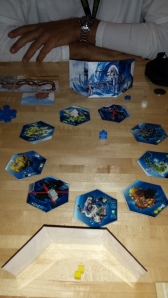 I wish I had better notes on the games, but they have vanished into the ether.  Fellow OG writer, W. Eric Martin, has posted his own recaps of them on BGG…

At this event, Asmodee was focusing on the upcoming stuff.  I had already received a few demos of their current games at the booth, and I am looking forward to a chance to play some of the new releases in the coming weeks including: Lords of Xidit, Abyss, Hyperborea and the new version of Cash and Guns!