Pandemic: Contagion (P:C) is one of two new games in the Pandemic universe to be released at Essen 2014.  Unlike the rest of its cousins, P:C has a few big things that help it stand out from the family.  First of all, it’s not a cooperative game!  This is the first Pandemic game to be fully competitive.  Secondly, the storyline is a bit different – instead of trying to save the world from disease, players in P:C instead are the viruses which are attempting to exterminate humankind.

In the game, each player gets an individual board which shows the three main characteristics of his virus: Incubation, Infection and Resistance.  These all start out at level 1 (on a scale of 0 to 4).  There is a space for a petri dish filled with the player’s cubes.  The “world” is a number of city cards dealt to the table. Each of these cards has a base color, a population number and a special ability at the bottom of the card.

The yellow player board

There is a deck of Contagion cards which is filled with cards that match the five colors for the cities.  Each player starts with a hand of 4 Contagion cards.  Finally, a timing deck is constructed – made up of two types of cards: Event Cards (which can be good or bad) and WHO cards (which are pretty much always bad).

Finally, before the game starts, a starting player is chosen.  Then, in reverse turn order, each player gets to freely infect one of the cities on the table. 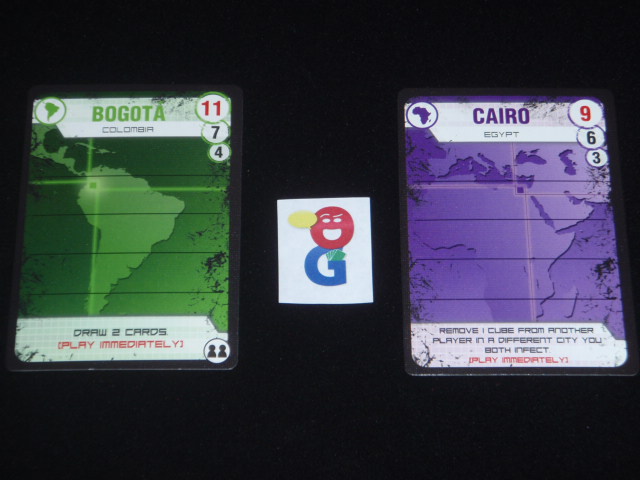 Two of the city cards in the game

There are 12 rounds in the game, and the timing deck helps you keep track of this number; there are 12 cards in this deck, and one is flipped over at the start of each round.  It is read aloud, and the effects of this card are dealt with on each player’s turn.  Sometimes the event happens at the start of each player’s turn, sometimes it is a benefit which can be done at any point on a player’s turn.  The event card may cause you to have an interim scoring or to place a new city card on the board.  Once the event is known, then players take their turn in clockwise order.

Some of the event cards

On a turn, a player has two actions.  He may choose from three different actions: Draw, Infect, Mutate (or in rare cases, he may pass).  He may do the same action twice. 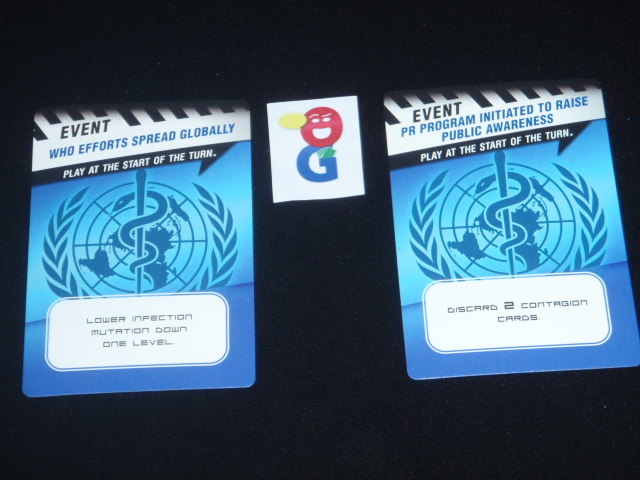 The game continues until either the event deck is empty and players have had twelve turns OR when at the end of any round where there are two or fewer cities left on the table.  At that time, there is a final scoring and then the player with the most points wins.

Scoring – as far as scoring goes, there are three different types of scoring

Well, I’ll start by saying that this is my favorite game in the Pandemic family, though not by much.  The main reason for this is because P:C is a competitive game and NOT a cooperative game.  But, even if I were to view this game outside the Pandemic family, I’d have to say that I still like it on its own merit.

The game moves quite fast, and when you break it down, you only get 24 actions at most to do things (plus dealing with the one event card per round).  Some turns can be as short as 5 seconds – for instance, if you draw twice.  Admittedly, in a game that probably takes 20-30 minutes, there isn’t a lot of room for deep strategy – but I have found there is more than enough to keep me interested.

You spend most of the early game trying to balance the need to make your virus stronger (for the long term) with taking advantage of tactical plays to the board.  If you spend your early actions mutating your virus, your actions later in the game will be better (more cards drawn, more cubes played, etc) – but you end up giving up valuable tie-breaker force if you end up playing later into each city.  Additionally, due to some of the WHO cards which specifically lower your viral characteristics, you could spend all of your early energy mutating to be back where you started!

And, again, with only 24 actions in the game at most, you have to decide whether you’re going to spend a lot of your early actions trying to buff yourself up (and not play anything to the board) or whether you’re just going to make the most of some weaker actions, but get to play to the board more often.

Even if you have a good plan, the board situation can often derail you.  You may have a great plan to continue mutating your virus. However, the event card may offer you a free cube placement, and this could end up enticing you to play cards to put cubes in a city because now you can close something out.  However, now your mutation plan is off by a few actions because you may need to draw cards now in order to have enough to do the mutation.  And, to top it off, you now have that many fewer actions to take advantage of that mutation – which may change its relative value.

If I had a wish for the game, it would be to have a couple of more Event and WHO cards.  As it stands now, you use 9 of 12 Event cards per game and 3 of 6 WHO cards per game.  There is enough to make sure that each game is different, but not quite enough to really shake it up.

As far as components go, I’m overall neutral. I love the smaller box that the games come in, and the cards/player boards are sturdy and well done.  The artwork is unobtrusive, and frankly, you mostly just need the colors to know what you’re doing.  Though many people find the petri dishes awesome, and admittedly they further the theme – I don’t find them necessary.  But, folks like games for different reasons, and if the inclusion of petri dishes turns some gamers on, why not include them?

Joe Huber (1 play): Area majority games don’t tend to be favorites of mine; I don’t mind the mechanism, but it often seems to be implemented in a way that I find frustrates, and this is not an exception.  And here, the theme – trying to kill everyone in various major cities around the world – is inherently offputting.  Add it all up, and while it’s certainly not a horrible game, it’s definitely not for me.

Mark Jackson (1 play): It’s a decent enough area control game – but I don’t find it particularly compelling. The test for whether you’ll be comfortable with the theme or not is probably your comfort with the card games Nuclear War and/or Plague & Pestilence.

Eric Martin (2 plays: 1 prototype, 1 review copy): Pandemic: Contagion works fine and captures something of the spirit of Pandemic with you having only two actions each turn and always wanting more, with you feeling like you’re up against it as time speeds along without you. For extra fun, be sure to read the rules with an ominous tone, interspersing demonic laughter with all the mentions of “death scoring”.