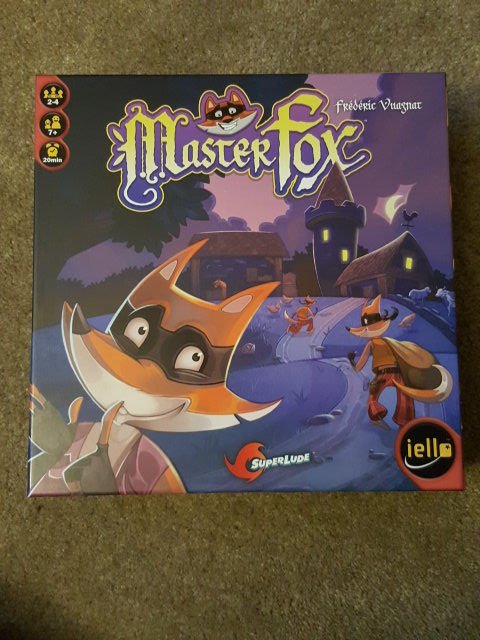 Master Fox is one of the new summer 2015 releases from IELLO.  In this game, players take on the role of foxes that are competing with each other to be the best thief.  The first player to score 10 points will take home the victory.

In the first round of the game, the 24 basic shapes are put in the bottom of the box.  Then, the deck of loot cards (one of each of the 8 basic shapes) is shuffled and three cards are drawn.  Everyone makes note of these cards – and the goal for the round is to collect one matching Loot pawn for each card.  The lid is placed on the box and shaken so that the pieces are mixed up. 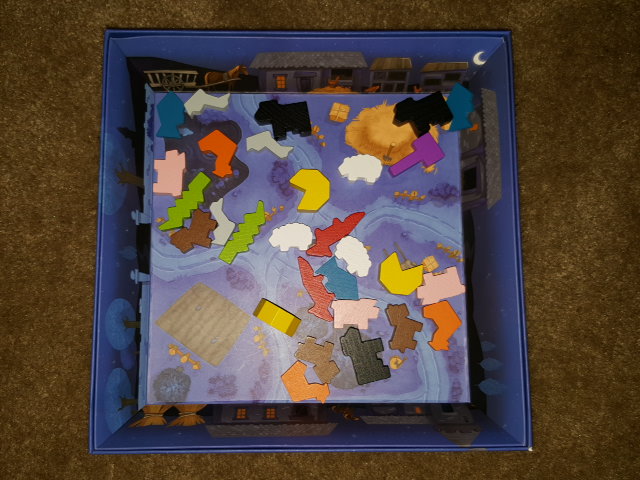 Now, everyone puts on their fox masks so that they can’t see anything.  The lid to the box is removed and players now try to grab the right loot using only their sense of touch.  Players are limited to only using one hand to try to search for loot, and when they decide to keep something, they must transfer it to their other hand which acts as their loot bag.  You can never hold more than 4 wooden pawns in your loot bag. The searching continues until someone declares the round to be over.  That person must have at least 3 Loot pawns in their sack.

Now, everyone takes off their masks and figures out what they have.  Scoring is fairly simple

For each positive point that you score, you collect egg tokens from the supply – which, of course, are the Victory Points in the game.

In the second round, two Fox Ruse pawns are added to the box.  Three new cards will be drawn and each is placed on top of one of the cards from the previous round.  During the looting, you are only allowed to collect one Ruse pawn – any extra ones will cost you a victory point!  In the scoring round, each Fox collected will be worth +1 victory point.  (Thus, it would be possible to score a maximum of 4VPs in this round because you could have one Loot piece matching each of the three cards as well as a Fox – and each of these four pieces would be worth 1 VP).

In the third round, you will only be able to replace two of the three cards from the prior round – as there are only 2 cards left in the deck!  The youngest player chooses which card will be repeated from the prior round.  In addition, the 2 Snake Ruse pawns are added to the box.  Again, you are still limited to collecting one Ruse token total in each round.  In the scoring phase, a Snake pawn allows you to steal a Loot pawn of your choice from one of your opponents.  You cannot steal a Ruse pawn though.

In the fourth round, the deck is shuffled and three new Loot cards are revealed from the deck.  Additionally, the final Ruse pawn, the Hammer, is added to the box.  The Hammer protects you in the Scoring phase from the Snakes.  If you have the Hammer, no one can steal your Loot tokens. 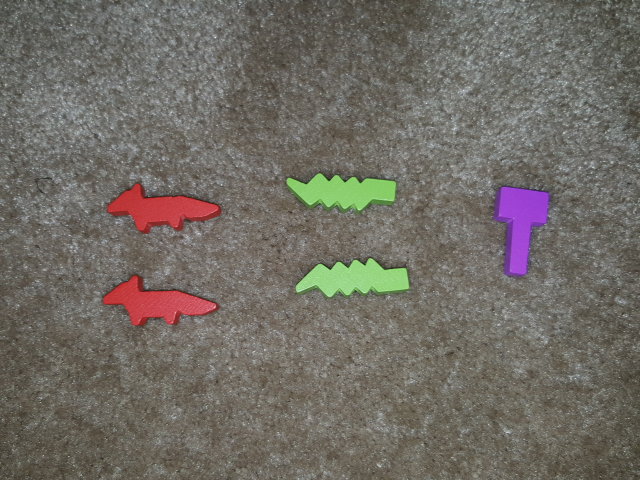 From this point on, there are no new pieces to add to the box.  The game continues on until someone reaches the target number of points – the rules suggest 10 points as a good target.  In every third round, you will only have 2 cards to draw, and you will have to choose one of the previous cards to remain in play.

Master Fox is a nice dexterity game, though one that I’m apparently not very good at.  For whatever reason, I’m completely unable to distinguish the three livestock pieces from each other – the horse, cow and pig pieces might as well be the same thing! 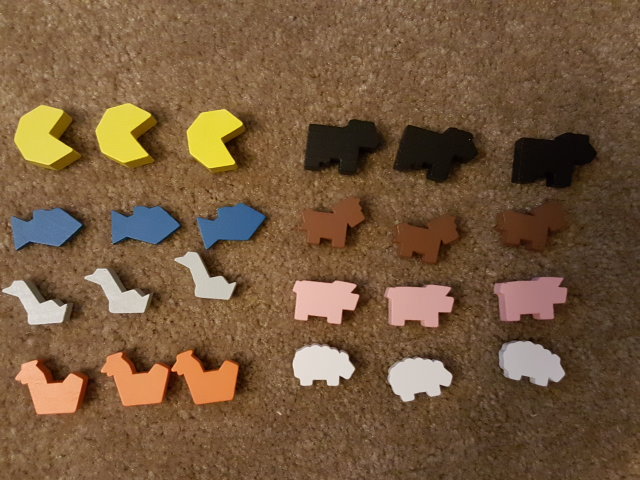 The basic pawns. Look how similar the ones on the right are

The game is unbelievably straightforward – there is a little bit of complexity with the Ruse pawns, but for the most part, you put on your mask and then fight with everyone else to try to get the right pieces as quick as possible!  If you match, +1 – otherwise, -1 for everything else.

As a note – if you’re a germaphobe or you don’t really like the people you’re gaming with or if someone in your group is a nose-picker – this may not be the game for you!  The box is not huge – 24cm square – and this means that you’ll be touching everyone else’s hands in the box as you scrabble around for the wooden pieces.

The game is rated for ages 7 and up, and I think this game will do best with the younger aged gamer.  While my game group had a pretty good time with it when we played, with much laughter for sure – there’s not really a lot of strategy here.  This would work as an end-of-night closer with them, but otherwise, I don’t know if I’d see this hitting the table much in that setting.  However, for the days where I bring games to local schools to show them non-Monopoly fun, this one will be a great hit.

Thoughts from Other Opinionated Gamers
Karen M: I agree with Dale about the livestock pieces–super hard to differentiate. And if I can’t do it, I imagine a 7-year-old would have a hard time too, but I could be completely wrong about that! In the game I played with all adults we were super-aggressive about trying to block others from even getting their hands into the box. It was a good enough time, but there isn’t enough for this to make a regular appearance in my gaming circles. I’m also concerned about the fox masks holding up for repeated plays; it seems like they could tear.

Nathan Beeler: I didn’t have nearly as much problem distinguishing pieces as Dale and Karen sound like they did. And yet, the game still feels only so-so to me. It’s a nifty idea that bumps against better designs like Dr. Shark and Visionary. But there’s just not much there to pull me back to it. I’ve played it, and I’m likely done with it.

Also, when we opened the set there was a broken mask in it, and another broke while we were playing. Karen’s concern about that is legitimate.