Sunday at the Gathering

Sunday morning starts with a nice breakfast with Friedemann and the boys from Filosofia/ZMan.  No business, just lots of hanging out, telling stories and catching up.

But not too long, but next is a new card game taught to me by green haired funny man

Again, cannot report now but will be able to later.

Another game of Animals on Board. I really like this one. Plays quick but gives you interesting decisions. 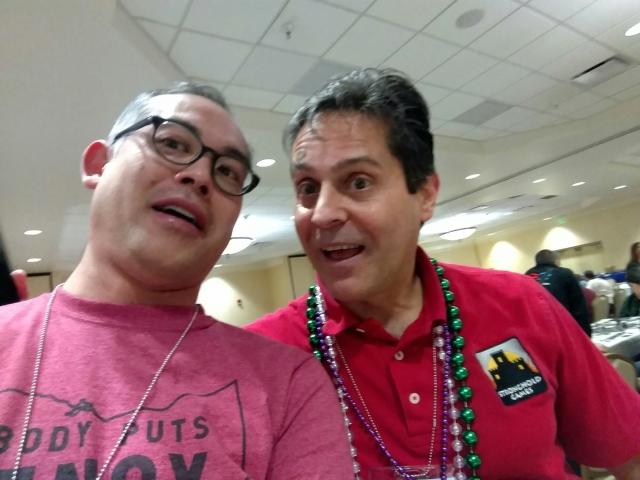 Stronghold is doing the game. It’s pretty darn good. On pre-order now. We’re also trying to get him hooked up with the Creation and Ark museum that’s being built near us. Seems like a natural tie in.

For the record, this and Quadropolis are the two games that I’ve had multiple sessions of thus far.

Speaking of that, quadropolis hits the table again, this time in 3p version. Still quite interesting. I’ve now played it four times in three days.

In the setup, certain tiles are simply not flipped over. This leads to some artificial congestion.

Plays proportionally faster with three. Thus far, one of the hits for me. (more on that whenever I have time to recap when I’m home)

Found an old friend. Guess who?

Apparently he was able to go to Nuremberg incognito with the new look.

Coming up next, KnitWit from Zman

You get to work with string, spools and clothespins. Also comes with awesome marking pencils to complete the theme.

There is a bit of dexterity to start where you place loops and spools. Word cards are added to cords. Then, you use your brain to come up with words that match the characteristics found on the word card and the loops around the spool.

Scoring is boggle style to eliminate answers and then valid unique answers score points for the number of loops around the spools.

It’s a cute party game if you have literate friends.

Now off to lunch. I think we’re going to swing a dead cat and eat at the Indian restaurant closest to it

1 Response to Sunday at the Gathering