In Aquarium, players vie with each other to have the best aquarium – by having the best looking fish and plants – at the end of three rounds of playing (at least in a 4p game).  The game revolves around the pet shop board – a place for up to five cards to be displayed.  At the start of the game, each player gets a matching set of 9 Action cards and fifteen points worth of beads.  Each player is also randomly dealt a one-star valued fish.  The deck is then divided into six equal-ish piles and a Feeding Time card is shuffled into sections 2, 4, and 6.  The deck is then reconstructed with pile 1 on the top and pile 6 on the bottom.

The 4p game is played over three rounds.  Each round ends immediately when a Feeding Time! card is revealed from the deck.  Thus, there are a variable number of turns in each round, and each player may not get the same number of turns in any particular round.

On a turn, players have two main options.

They may choose to Pass.  If they do, they take 2 blue beads (value 1 each) from the supply.  Then, the top card from the Aquarium deck is added to the pet shop.  If there are already 5 cards in the pet shop prior to drawing a card, the five current cards are all discarded and the top card of the Aquarium deck becomes the only card in the deck at the end of this turn. 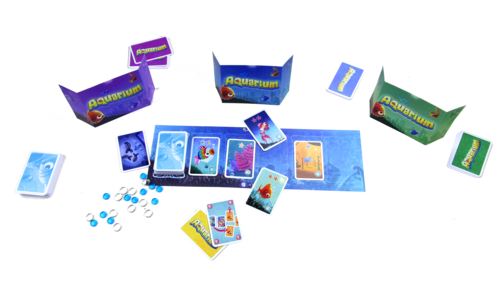 The player may also choose to Buy cards.  This is a somewhat more complicated two-step procedure…  Once a player states that he wants to buy cards, all other players get a chance to play one of their Phase I action cards to modify the contents of the Pet Shop.  There are 5 possible actions cards that can be played at this time – all players secretly and simultaneously choose, they are revealed and then done clockwise from the left of the active player:

After all the cards are done, players who played a Pass card take it back into their hands.  All other played cards are discarded to the side of the table for now.

After all the cards are done, players who played a Pass card take it back into their hands.  All other played cards are discarded to the side of the table for now.  Then, the card are applied in the following order of operations:  (+/- 1), then (x2), then (1/2).

Now that the lineup of cards has been set and then the price has been modified, the active player now decides if he’s going to buy the cards or not.  If he wants the cards as the given price, he buys them.  The money is split equally amongst all players who played a 1/2 card.  If none were played, the amount is paid to the bank.  If the player does not want it, his turns simply ends at this point.

This same pattern of passing or buying is continued until a Feeding Time! card is revealed from the Aquarium deck.  At whatever point this shows up – even if in the middle of a player’s turn – all players must work on feeding their Fish. The four Fish Food price cards are shuffled (1, 2, 3, 3) and a price card is drawn.  Each fish must now be fed – the cost per fish is equal to their size multiplied by the current price of food.  All players must feed their fish.  If you cannot or choose not to feed a fish, you discard it as you have let it starve to death.  Then, once all the fish have been fed (or starved and discarded), all players pick up any previously discarded Phase I and Phase II cards which had been played earlier. 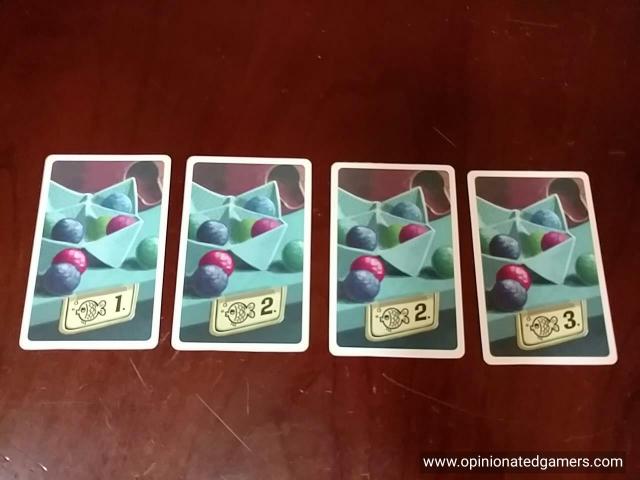 The game resumes at wherever it left off… Unless this was the third Feeding Time! card to be revealed. If so, the game now moves into final scoring.  There are a number of different ways to score:

player air with the scoring summary

Aquarium is a decent set collecting game.  In our games, the usual pattern has been for players to pass (building up their money supply) until there are four or five cards in the row at the start of their turn.  You definitely need to make sure that you have enough money in reserve before you move to the buy phase …

The whole process of buying cards is certainly unique (at least for me) though quite convoluted.   In the first phase of card play, the cards on offer can completely change.  As the action cards are only able to be used once in each of the three game rounds, there’s not a guarantee that cards will be played against you, but more than likely they will.  There is a bit of guessing in the whole process as action cards are secretly and simultaneously chosen.

Now, once the cards are set up, the price fixing is another round of card playing and resolving.  Some players may want to increase the price of the set to keep you from buying them – at the same time, other players may be trying to halve the price as a way to generate income for themselves.

The end result of these two rounds of action card play is that the cards you buy are rarely the same as what you started with – and you really have no way of predicting from the start what the total cost of the lot will be…  Thus, my strategy in Aquarium thus far is to wait until I have enough money to reasonably buy some cards, call a buying round on my turn, and then make a decision on whether to buy or not once I can see what is on offer and for how much.

On other player turns, I will try to use my action cards to deny other players from completing sets in Phase I.  The biggest part of Phase 2 is guessing when to play my 1/2 card so that I’m the only one playing it in a round, and therefore getting the most money in return.  Having enough money on hand is always important because you cannot predict when the feeding rounds will occur, and it is truly painful when you watch your expensive fish die off because you cannot afford to feed them.

For me, Aquarium is more of a tactical game than a planning one.  Simply set yourself up to be able to buy cards and then make a decision when it is in front of you.  As you do not have great control over the cards you will be able to buy (as your astute opponents will try to remove desirable cards from your offer), it seems like sometimes the best play is to simply get as many cards as possible (and that’s actually a harder task than it sounds to do consistently).  We have had a few interesting moments near the end of games where a player might offer up a single card to buy – trying to get other players NOT to play their action cards on such a small lot – in hopes of getting a specific card to finish up a set…