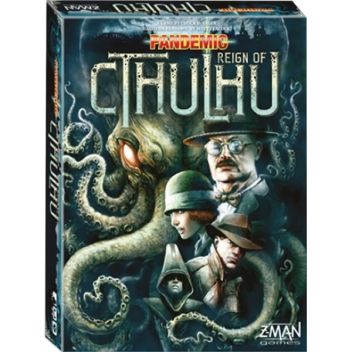 I first played Pandemic: Reign of Cthulhu at Gen Con, and I impressed by the clever implementation of the theme, and more importantly, the fact that Reign of Cthulhu was different enough from Pandemic to feel fresh.  Having now played a few more times, my first impression holds.

This wasn’t just the pasting on of a popular theme: this is a well-designed tribute to Lovecraft.  For fans of the mythos or fans of Pandemic, Reign of Cthulhu is worth checking out.

Note: This is a full walkthrough.  If you’re familiar with Pandemic, you can arguably skip this and jump straight to my section on the differences between Reign of Cthulhu and Pandemic.

You and your fellow players are investigators working together to seal four gates and prevent the awakening of Cthulhu, or to prevent the area from being overrun with cultists or Shoggoths.

You win if you seal all four gates.  However, your team loses if:

When the game board is set up, the Cthulhu Old One card is placed face down in the seventh space.  Six other Old One cards are placed in the remaining spaces to the left of Cthulhu.

Each player takes an investigator and the matching figure, which they place at the Train Station in Arkham.  Each player gets 4 sanity tokens and a reference card.  The investigators each have special abilities, and along the way, they will collect Relic cards that given them additional powers.

The Player card deck is then set up.  Remove the desired number of Clue cards to adjust the difficulty difficult.  Relic cards are then worked in based on the number of players, and the player deck is prepared by separating it into four face down piles and shuffling one Evil Stirs card into each pile.  (The Player deck consists of both Clue cards and Relic cards.)  The game then begins.

For the actions, a player may:

There is a hand limit of seven cards for each player.

After the four actions, a player draws the top two cards from the Player deck.  If you draw an Evil Stirs card, immediately do the following steps in order:

Finally, flip over as many Summoning cards as the current Summoning rate.  Place a cultist in each location.  If a location has 3 cultists on it, an awakening ritual occurs, as discussed below.  Also, if a certain icon appears on a Summoning card, each Shoggoth moves one location closer to the nearest open gate.  If a Shoggoth is on an open gate already, it is removed from the board and an awakening ritual occurs.

In an awakening, the next Old One is flipped and its effects are applied.  There are a variety of different effects depending on the card.  Some are instantaneous (like forcing each investigator to choose between adding one cultist to their location or losing one sanity), while others are permanent (like removing cultists from the supply, making it easier to lose the game).

Players must keep from going mad.  You start the game with sanity tokens, but you can lose these on sanity rolls, which can either have no effect, cause the loss of 1 or 2 sanity tokens, or add 2 cultists to a current location.  You can gain these from using a gate to travel, from Relic cards, from entering a location with a Shoggoth (or them entering your location), or as a step of an Evil Stirs card.  If a player loses their tokens, they go insane, losing an action each turn and changing their special ability.  Players can regain sanity if they seal a gate while insane.

Once again, players win if they can seal four gates before any of the loss conditions are met.

The Big Differences Between Pandemic and Reign of Cthulhu

If you’re familiar with Pandemic, there are obviously a number of similarities to that game.  But there are also numerous differences, and these are what I see as the big changes.

First, the goal is no longer to cure diseases, but rather to seal portals.  In addition to having cultists (which replace the disease cubes) on the board, you can also have Shoggoths, which move closer to the portals — and pass through them — when certain events happen in gameplay.

Second, the Shoggoths moving through the portals — or the drawing of the Evil Stirs cards — triggers the awakening of an Old One.  There are no longer outbreaks: just the awakenings.  These cards either cause adverse events to occur or modify gameplay against the investigators.  Cthulhu is the final Old One, and awakening him causes the players to lose.

Third, players now have sanity tokens, and certain in-game events can cause them to lose these or risk losing them with a dice roll.  Insane investigators suffer certain ill effects, like losing an action or modifying their special ability.

Fourth, movement is a bit easier.  The Clue cards denote each of the four towns, not specific locations in them, making travel — and trading cards — much simpler.   Players can also travel through gates.  But Reign of Cthulhu is also slightly more complex, because you need to balance both the cultists and the Shoggoths, plus you need to track how the Old Ones change the game.

As I said back at Gen Con, when I heard they were making Pandemic: Reign of Cthulhu, I rolled my eyes.  Pandemic was an amazing step forward in game design, and it is deserving of its high praise over the years, but why a Cthulhu-themed version?  I’m not a fan of the Cthulhu mythos, and I often criticize how overused it is.

But this game is impressive.  Despite my bias against all things Cthulhu, I’ve read some Lovecraft, so I know enough about the mythos to know that it works exceptionally well here.  My team felt like we were battling back cultists, Shoggoths, and Old Ones in a desperate attempt to prevent the awakening of Cthulhu, all while trying to avoid going insane.

More importantly, Reign of Cthulhu is different enough from Pandemic mechanically to feel fresh.  Pandemic was obviously a starting point for the design, and much of the gameplay is indeed similar.  But as I outline above, this is a fresh take on Pandemic, with a few clever twists.

I especially enjoy how the addition of the Old Ones changed the game: because each one has a different sinister power, the gameplay can feel dramatically different from game to game.  The Shoggoths are also a cool take on the “outbreak” from Pandemic: because they move around the board and take three actions to complete, they always feel like an imminent threat that must be addressed.

That said, this seems easier to me than Pandemic, in large part because travel is so much easier.  But this is still a challenge… it wouldn’t be Pandemic unless it was!

The components are beautiful.  The board is dark and spooky, and the cards are evocative of the Lovecraftian theme.  The miniatures are striking.  This is certainly more attractive — at least to me — than Pandemic.  And because of how attractive the game is, and because of a couple of the new mechanics, I think I prefer this game to base Pandemic.

In conclusion, Reign of Cthulhu has pleasantly surprised me.  Pandemic was the inspiration, so this was always going to be a great game.  But this wasn’t just the pasting on of a popular theme: this is a well-designed tribute to Lovecraft.  For fans of the mythos or fans of Pandemic, Reign of Cthulhu is worth checking out.  I think this is one of the better cooperative games of the year.

Patrick Brennan: It’s a nice merge of Pandemic mechanics with Cthulhu genre mechanics – change cubes to small Cultists and big Shoggoths to defeat, close a gate in each colour instead of curing a disease, add a dice to see if you lose sanity when you try to do major stuff (where losing enough sanity makes you a less-powered character). But you still need to do the Pandemic essentials – get the right coloured cards into the right hands whilst keeping the board as clean as possible. It’s definitely more luck-based. You can get a rotten start at easy level and an easy game at hard level (which is simply a smaller deck). I liked how each pandemic/evil stirs card introduces a new random global effect – more luck but fun. The reason for rating it lower than normal Pandemic is that it feels smaller, less epic, where the smaller board seem to make the decisions as to the best path seem a bit easier as a result, especially once you’ve done a Legacy season. But good theming, and happy to play for fun.