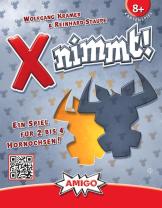 6 nimmt! is Wolfgang Kramer’s bestselling game, with more than 2.4 million copies sold.  Originally released in 1994, the game went on to win the Deutscher Spiele Preis in 1994, the 1994 À la Carte award, and a Spiel des Jahres recommendation.  In English, it is commonly called “Category 5” or “Take 6”.  If you’ve never played 6 nimmt!, you can find it online at Board Game Arena.

The latest version is X nimmt!, which is being released at Essen 2016, although you can already buy it from some European shops.

Gameplay Walkthrough: 6 nimmt! with a twist…

Just like with 6 nimmt!, you’re going to be simultaneously playing cards in rows.  So what’s different?  In short, there will be a different number of cards allowed in each row, plus you’ll have your own personal row to place cards before they count against you.

To set up, the “3,” “4,” and “5” cards are placed to start three rows, and a random number card is put beside them.  Each player also receives an “X” card and a starting hand of eight number cards.

Each player simultaneously selects a card from his or her hand.  Players reveal at the same time, and the player with the lowest number places it on one of the rows.  Cards are always placed at the right of the row, and the numbers in the row must always be sequential.  The player must choose the row with the least difference between his card and the previous rightmost card.

In order from lowest to highest, the players continues placing until all cards are in rows.

If the placement of a card ever fills a row (i.e. it is the 3rd card in the “3” row, the 4th card in the “4” row, etc.), then the player takes all of the cards already in the row, and the card played starts the new row.

If a card is ever lower numbered than all of the cards in the rows, a player can choose which row to take, placing the card they attempted to play as a start of the new row.

When you take cards, you must pick exactly one to go into your personal “X” row.  The remaining cards go into your hand and can be played starting with the next turn.

Like the other rows, your “X” row must be placed in ascending order.  If you ever can’t do that, you take all of the cards in the “X” row and place them face down next to your “X” card, forming the “X” pile.

If, after a turn, a player has run out of cards, the round ends.  Bulls on your hand cards count as 1 point each.  Bulls in your “X” pile count double.  Cards in the “X” row do not count at all.

The player with the lowest score at the end of two rounds wins.

X nimmt! is a clever twist on 6 nimmt!, and we’ve had great fun with the game.  Much like 6 nimmt!, this game can seem a bit random at first, but after a few plays, this becomes an interesting experience in hand management.  X nimmt! feels deeper than its famous predecessor, and I predict gamers will enjoy where Kramer & Staupe have taken the series.

Play is primarily tactical, and I don’t know that there is a long-term strategy to the game.  You obviously want to get the cards with many bull heads out of your hand as soon as possible, then try not to be the person to take those or other high value cards, but doing that depends on what is on the table.

Playing low cards can be advantageous: while you do end up taking cards when you do this, you can control which row you take.

And in that regard, the “X” row is a brilliant addition to the game.  On one hand, it is chance to park high-value cards, but on the other hand, you’re playing with fire: any cards that get flipped into the “X” pile will be a hefty penalty.

I haven’t tried remembering what my opponents take into their hand, but I could see that being a viable strategy for players who get really into the game (and have a good memory).

The game plays well at 2, 3, or 4 players, but I think it shines best with two.  With three or four it becomes slightly more chaotic and random.  The length of play increases slightly with more than two players, but not too much.  We’ve been playing this in about the 25-minute advertised time.

If you’re a fan of 6 nimmt!, then I predict you’ll like X nimmt!.  This feels like a great substitute for 6 nimmt! at low player counts.  This is certainly one of my favorite games in the series, and I like it better than its more famous predecessor.