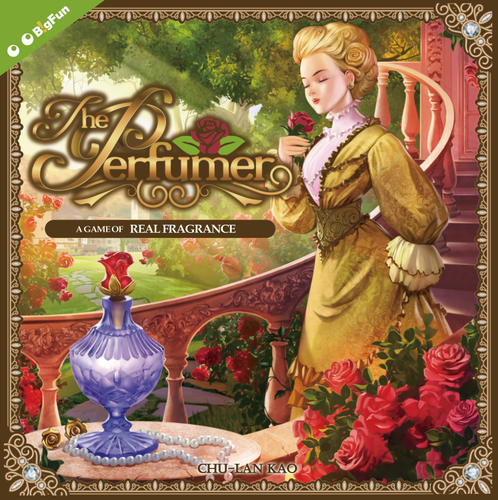 The board is a circular affair with seven wedges that surround the central area.  Each represents an area of the world, and each has a supply of its indigenous ingredient.  There are smelling strips – three for each of the seven scents – in the box.  One is placed face up on the area that matches it.  Another set is shuffled and then secretly placed into seven colored holders.  (The third strip of each type is held in reserve – to ensure that the strips aren’t overused or to replace one in case of loss). 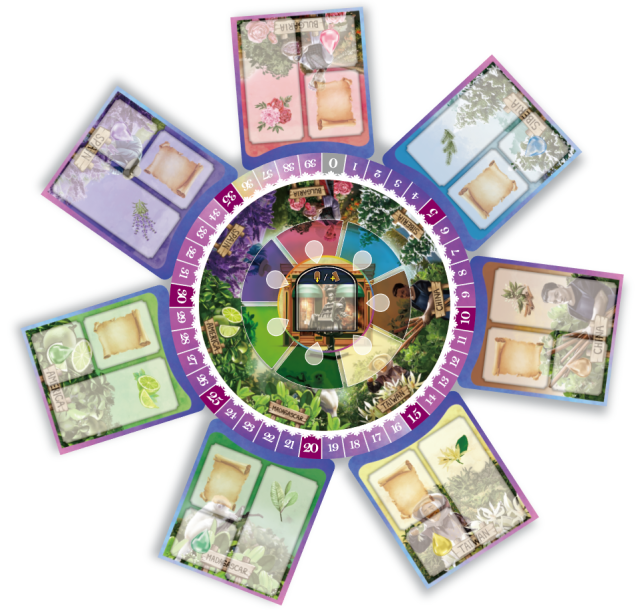 Each player is given a recipe card and a workspace board.  Platers also get 7 colored pipettes that match the seven colors of the fragrance holders.  Some order tiles are shuffled and a deck is formed.  One order tile is dealt face up to each of the 7 regions on the board.  A starting player is randomly decided, and then in reverse player order, each player gets to choose from a selection of Helper tiles.  These tiles all give their owner a specific ability – might be ongoing, might be one-time use only.

Each player takes a turn in order, doing all 5 phases of the turn.  The next player then does the same thing.  The game continues until the last tile in the Order stack is placed onto a board space.  At this time, the game continues to the end of the round so that all players have an equal number of turns and then the game ends.

Phase 1 – Return all fragrance-learning components.  You will likely have ended your last turn with stuff to smell.  Put it all back on the board now 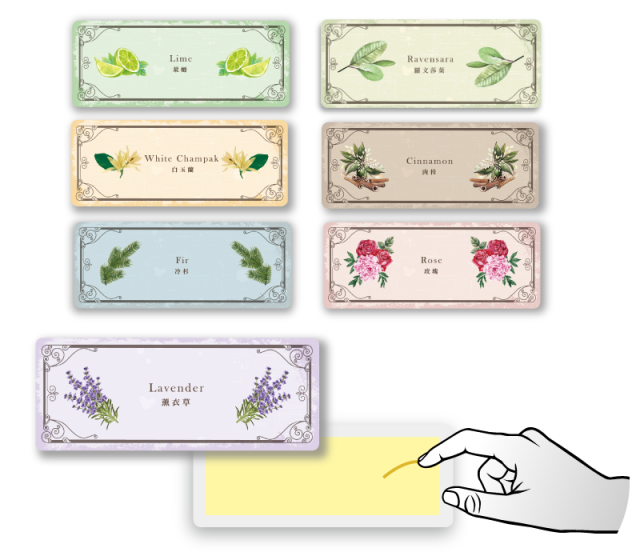 Phase 2 – Take 5 Actions – there are 6 options. Each costs 1 Action point. You can repeat actions.

Phase 3 – Take Fragrance Card – if you are standing in one of the seven locations AND the Fragrance card is available there, you collect this card to keep until your next turn

Phase 4 – Take a smelling strip – You can take any available colored Fragrance holder that is next to the board.

Phase 5 – Learn to smell – while the next player starts their turn, you can now use the scratch-and-sniff areas on the Fragrance cards and the strips in the Fragrance holders to try to determine what things smell like, and hopefully to figure out which colors are which smells.  You have until the start of your next turn to do this.

Again the game ends when the Order stack is dealt out.  During the course of the game, players have been scoring points for completing recipes.  At the end of the game, players now score their recipe cards.  The seven smelling strips are taken out of the holders and their identities are revealed.  All players check the pipettes on their LOCKED IN areas of their recipe card, and they will score 5/10/15 VP for the 1/2/3 ingredient areas on their card.  The player with the highest score wins!

The rules outlined above are the beginner game.  There is an advanced version of the game which has you reset the fragrances and play a second round.  There are also a second set of Helper cards which come into play specifically for this round.  However, we have not yet played that more complex version so I can really only comment that those rules exist.

Well, this game is a first for me.  I don’t know if I’ve ever come across a scratch-and-sniff game before.  It is definitely interesting, and a new challenge.  The smelling strips are definitely odiferous, and according to the rules, they should be good for up to 2 years and 10,000 scratches.  That is probably more than the lifetime of the game!  There are a number of silica gel packs included in the box to help keep the moisture down which should also help the longevity of the smelling strips.

This game can almost be broken into two parts – though, obviously it’s not that simple.  The first is a pick up and deliver game.  You need to spend your actions moving around the board, collecting ingredients and then dropping them off at their destination to score an order tile and gain VPs.  Depending on the number of ingredients needed, you will score 3/5/7 VPs per order.

The second part of the game is learning the fragrances and matching them up to the colors.  This is much harder on your initial plays and will likely become easier as you are more familiar with them.  At this point, I feel like I can reliably distinguish 4 of the 7 smells (there is a set of 3 though that smell very alike to me), and thus, if I played against a complete Perfumer novice, I would have a distinct advantage.   You need to get your meeple to stop in the right area at the end of each turn so that you can pick up one of the known smell samples, and then either use your memory or direct comparison to a colored Fragrance holder to determine what smell goes with what color.

This is a bigger part of the game scorewise because a clean sweep of the recipe card is worth 40 points, and I am fairly sure that this eclipses any order tile scoring that you could possibly get.  This seems to be a fair division of labor though because after all, the whole game is built around the idea of using your sense of smell.  Given that, the game mechanism that relies upon that should be the bulk of the scoring.

I do kind of wish that there were player screens as well.  It’s easy enough to see other player’s boards, and once someone locks in a recipe part, especially the 1-ingredient part, it gives you free information. i.e. If Jim thinks that yellow is the Lime flavor, you might be able to help your own determinations.  If it were all secret to the end, each player would be left to their own sense of smell to figure out what goes where.

Thus far, I’ve enjoyed my plays of the Perfumer.  What remains to be seen is the longevity of the game.  As it stands now, I feel like I can remember at least 4 or 5 of the scents, and that makes the game less challenging.  Will it remain fun after 10 plays?  I can’t tell you yet.  Maybe it’s the sort of game that you can only play once every few months so that your brain can’t completely remember the smells.  I guess we’ll have to wait and see what my first game is like post-Essen, and we’ll see if I can still tell White Champak apart from Ravensara.

I’m also looking forward to adding the Essen promo helper and recipe card to the game! 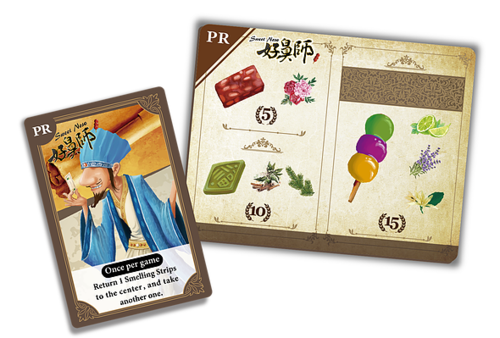 1 Response to Dale Yu: Essen Preview of The Perfumer