I wanted to start this review by making some kind of sweeping pronouncement about the nature of dice games versus games that merely use dice… and then I realized that:

So, instead, you get a relatively straightforward review of La Granja: No Siesta (The Dice Game) from someone who (gasp!) has never actually played the well-liked Euro “parent”, La Granja. (That’s right – never played. Wouldn’t turn down a game if it showed up at the table, but I’m much more likely to end up playing The Dragon & Flagon or Sentinels of the Multiverse.)

By the way, I’m going to call the game No Siesta from here on out… the full name of the game is a bit unwieldy for blogging purposes.

No Siesta is a farming game… and once again, I’m blown away that I’m actually interested in roofing my barn and getting my produce to market. Similar to Agricola, the gameplay is easily explained in terms of the theme, making it easier to teach to new players. 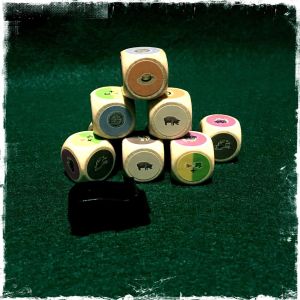 There are seven possible resources:

Those seven resources are used to do six different things

As I pointed out earlier, all of that makes sense – and that melding of theme & game mechanic(ism) is a real plus in my book.

It’s Getting Drafty In Here

Now players use their resources to fill in the various areas of their farm. (This can be done in turn order or simultaneously with more experienced players.) Resources are spent left to right and offer various benefits as objectives are completed.

Players can save a single unspent resource on their resource board.

Honestly, that description makes No Siesta sound dry as unbuttered toast… but in practice, it’s a very enjoyable game that runs about 15 minutes per player.

I personally enjoy playing board games solo – especially if the designer/publisher has given a meaningful solitaire mode in the rules. (Excellent examples: the solitaire engine in the first arc of Race for the Galaxy expansions, the solo mode for the aforementioned Agricola, and the single player version of The Pursuit of Happiness.)

Variety is the Spice of Life (And Games)

We played both the base & advanced game – and found the advanced game to move slightly faster (due to the easier availability of hats for players that focused on those helpers). We’ve found that a number of different approaches to winning seem viable, which is always a good sign.

Another observation: the supply of helpers is “tighter” in 2 and 4 player games… meaning the friendliest version of the game is 3 player advanced.

Resource Manipulation Can Be Fun!

The rural heartbeat of No Siesta is about manipulating stuff to achieve your objectives. It’s a game about priorities and (mild) risk… and my boys and I found it be enjoyable and fast-moving. It’s not a particularly complicated game – I put it in the same difficulty zone as two other dice game adaptions: Roll for the Galaxy and Nations: The Dice Game. (I will note that Roll is much more difficult to teach.)

One final point: it’s a great game for your travel bag… you can reduce the size down from the not-overly-large box into a zip-lock baggie for easy transport.

Joe Huber (1 play) – No Siesta is yet another game in the “roll dice, and use them to accomplish goals (or at least get closer)” genre. In spite of what Mark claims, my play of the game felt very multiplayer solitaire – noting that I don’t see that as an issue. But it also felt a little bland. There are lots of things to do, and you can’t do all of them – but you’ll likely do enough of them to be in the right ballpark. To the extent there are better choices in the game – particularly in helpers – one is left with the feeling that there’s either an optimal set of choices (without the advanced helpers) or there is a race for helpers with no compensation for finishing second. The re-rolling of the dice after each choice has the unfortunate side-effect of simplifying choices, in many cases.

Having said that – it doesn’t make for a bad game. In fact, it’s quite pleasant; I’d have no issue with playing the game again. I just don’t feel compelled to go buy a copy. All of which leaves me in the neutral camp – if in the happier portion of that camp where it won’t bother me at all if someone else wants to play the game.

Finally – I did play La Granja, twice. It didn’t work for me, as I found the difference in the power of the cards made it unpleasant to play; I felt too constrained in my play options by the cards I saw. No Siesta is a completely different game – set in the same universe, but for me it does nothing to evoke the original. For me, that’s a positive thing; for others, I would neither be too optimistic based upon enjoyment of the board game, or too pessimistic in the reverse case.

Dan Blum (1 play): I have played La Granja a number of times, and while I like it better than Joe does, I agree with him that No Siesta is nothing like it; it has a few elements in common but it uses them in very different ways.

That being said, my main issue with La Granja is much the same as Joe’s issue with this game: as long as you do something reasonable you’ll end up with a decent score. (I am not sure I have ever played a game of La Granja with as much as ten points difference between first and last place.) This makes the decisions seem a bit meaningless in retrospect. No Siesta probably does have the same issue but I don’t mind that sort of thing as much in a shorter, simpler game.

Finally, while I’m rating it “I like it” that more reflects willingness to play it than desire to play it; there are just so many dice games out these days and this one doesn’t really stand out from the pack.

I like it… Mark Jackson, Doug Garrett, Dan Blum

follower of Jesus, husband, father, pastor, boardgamer, writer, Legomaniac, Disneyphile, voted most likely to have the same Christmas wish list at age 44 as he did at age 14
View all posts by Mark "Fluff Daddy" Jackson →
This entry was posted in Essen 2016, Reviews and tagged dice game, Stronghold Games. Bookmark the permalink.