There was a time last October when I moved this to the “not interested category”.  Sometimes I don’t keep up with pre-Essen/pre-BGG.CON planning, and end up overwhelmed, and then some game that I’ve marked “undecided” gets moved with a hatchet to “I don’t have time to deal with you.”  I mean, I looked at it a second time and thought “what was the deal with this one again?”

But then I found myself in a situation where it was things I did not want to play from someone else’s bag of games or Gads Hill 1874, so here we are. 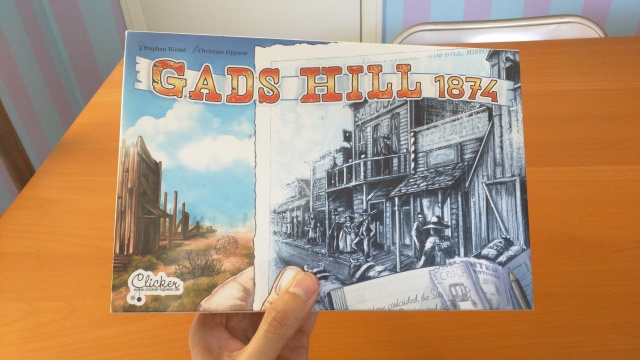 In Gads Hill 1874 we’re roughly archaeologistdetectives discovering an old west town – Where was that Barbershop? What street was the School on?

The wrinkle here, as in general with Riedel’s games, is that there isn’t an answer yet.  There’s no person/weapon/room card tucked in a nice envelope that form an answer you’re working towards.  Rather than whole situation is in flux as you play, as this is an inductive game, rather than a deductive game.

There’s no set location for 22 of the buildings when the game begins.  Instead, each has 5 potentialities of locations where it could have been.  As you eliminate these potentials, and narrow down where the building is (in this timeline), you flip them over and collect them as points because you’re awesome at being an archealogistdetective.

The game uses three types of cards to narrow down the locations, and for most of the game you can play up to 2 on your turn (though you’ll only draw 1).  Some of the cards (“Building Cards”) are fairly straightforward, and narrow down a building to 4 specific locations (Hey! You just earned yourself 1 point.)

The other two use a concept known as “My Building” which I’ve proved fairly dense at explaining in person, so what could go wrong now.  In essence, you’ll have a few buildings in front of you that are “yours”; other players will have some in front of them; some will be in a neutral supply.  The “Building Cards” previously discussed don’t care about where the building is or who it is in front of.  The other types of cards (“District Cards” and “Condition Cards”) will.  I like to explain it as Mad Libs (but again, this never works).  The card will say something like “The Laundry was across from [MY BUILDING]” – when utilizing this card, you take out the [MY BUILDING] placeholder, and insert the name of a building in front of you, such as the Bank.  When you play the card, it takes effect as “The Laundry was across from the Bank”.

To be specific, the “District Cards” narrow one of [MY BUILDING]s down to 8 locations (not such a great archaeologistdetective now, are you), and the “Condition Cards” relate a specific building (no matter where it is) and a [MY BUILDING].  These “Condition Cards” show 8 possible positions in (generally) 4 pairs of 2 – the specific and the MY will be in one of those pairs.

When a building is narrowed down to only one potential location, you place it in the town and take, as points, any other potential markers that are now imposters to the deed at that location. 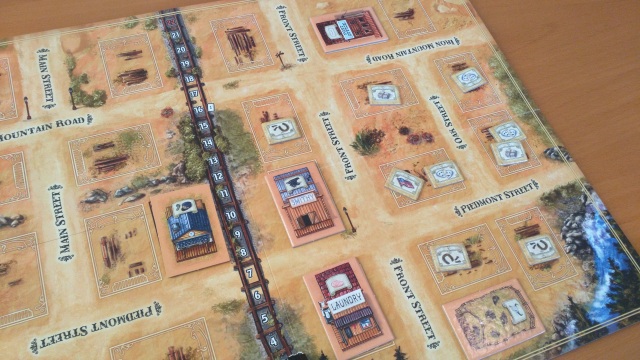 Play until 22 buildings are built (3 start on the board).

(There are a few wrinkles I left out, but you get the idea).

I love this game.  Wait, I gave away the punch line.

I’ve never felt so creative in playing a strategy game.  I don’t know what the word is for when I craft a strategy in Agricola or something else, but creative isn’t it.  When I look over my hand of cards in Gads Hill, I sometimes have an A-ha/Eureka moment – maybe not when it comes to actually being such a great move, but it is almost like the cards are multi-use.  The cards aren’t multi-use, but, depending on how you pair them with other cards, or how you logically implement them, it is as if they are.

When you draw cards, you can choose what deck to draw from.  There seems to be some strategy to be had in choosing whether to play 1 or 2 cards, and which deck do you draw replacements from.  Similarly, you can pay two points to take a building from the supply as a [MY BUILDING], and I’m a sucker for games that tempt you with paying away victory points.

I don’t know where my tastes fall on the tactical/strategy spectrum, but it is somewhere not at either extreme.  This hits a soft spot for me when it comes to the tactics of which/how many card(s) to play this turn and which [MY BUILDING] to use and the strategy of which deck to draw from for my long term plans.

It is a joy to see the logical maneuvers that people can pull off.

One downside that some folks I’ve played with have had is that the state of our archaeological efforts that are shown on the board is the only reality.  That is to say, if you played a card on your last turn, and want to use part of the information from that card in a logical conclusion this time, that’s a no-go; only what is currently on the board -don’t get so much into the theme, buddy! Speaking of which, it just tickles me that the flavor text of how this works is you have old newspaper clippings saying “so and so robbed the bank on X street” as justification for what’s happening thematically.

Joe Huber (23 total plays of Old Town / Gads Hill – wait, now I’m giving away my punchline, too…): Gads Hill 1874 is, as James notes, another Proof Game from Riedel.  I refer to the genre (which, among games not designed by Riedel, includes Tobago and Too Many Cinderellas) as Proof Games because the objective in all of these games is to prove that among all of the possible cases, the one you want is the correct one.  Riedel originated this genre with Old Town, way back in 2000 – and has redesigned his original game many times since.  The only problem, for me, is that after the 2001 edition – and there have been far more editions of Old Town, which was originally desktop published, than for most games – Riedel focused primarily on making the game work most smoothly.  As a result, it’s much more accessible in the most readily available editions (the 2004 edition and wood box 2012 remake) – but, for me, less interesting.  Gads Hill 1874 – which, have no doubt, could have been the 2016 edition of Old Town – returns some of the more interesting aspects of the earliest editions of Old Town, including an asymmetric board and more buildings than locations.  As a result, it compares very comparably to my favorite edition of Old Town – and with better components and a more inviting title, to boot.

And, as someone who nearly always dislikes expansions, I have to say – for this game, the expansion actually works well.  With the expansion, the three buildings that start on the board – don’t.  And playing them can score a player more points – but is inherently more difficult to manage, until later in the game.  Even then, a valuable card for these special buildings can suddenly become worthless, if the town is built up faster than anticipated; there’s a nice risk/reward trade off in drawing the cards which determine where the special buildings go.  As there are only three additional buildings, the game is not noticeably longer, and there’s even more variation in the possible configurations, an overall win.