My four favorite releases from 2016 had not been reviewed here on the OG when I joined earlier this year, so I’m stepping a little closer to rectifying that as I talk about Captive and Knights today.  (I gave my copy of Captive to a friend, so you won’t get any photos of it here.) 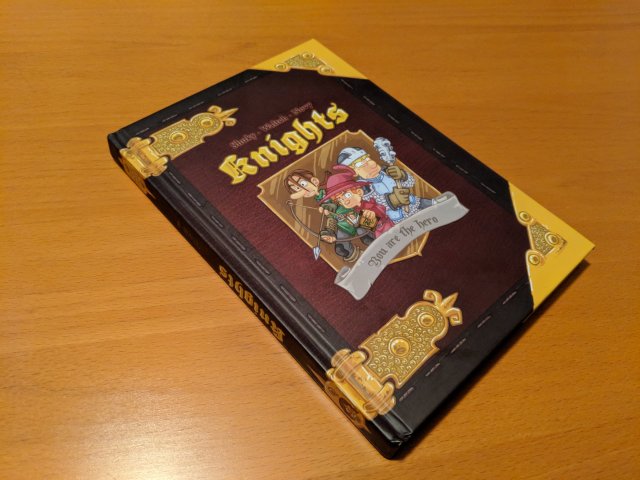 In a sense, these are Choose-Your-Own-Adventure style books – in Taken, err, I mean, Captive, your daughter has been kidnapped and you’ve gone to hunt down the mercenaries and rescue her – in Knights, you’re a kid trying to become a knight.  In both cases, there will be choices, but these are most often presented graphically.

In a sense, these are graphic novels – in Captive you enter the house where the bad guys are, and different door ways, hallways, etc., will be labeled with different panel/page numbers, and if you want to take that route, flip to that panel/page.  In Knights, you’re generally wandering the forest or medieval towns, and different paths are similarly labeled.

In a sense, these are solo RPGs – in both Captive and Knights you have different skills (e.g. strength, dexterity), a satchel which can carry certain items you acquire, etc.

In a sense, Captive is a T.I.M.E Stories type book – as you can’t really choose your own adventure, well, if you want to win.  Many paths lead to death.  Others lead back to the room where you were – pick the ‘right’ path to continue the story this time.  Some paths lead to puzzles to solve and it’s helpful to do them in the correct order. (Knights is more of a sandbox.)

In a sense, these have elements of Unlock!/The Glorious South as you’ll need to study the pictures carefully – Captive has numbers hidden in the pictures that give you little plot spurs to follow, and Knights has items to acquire through close visual inspection (and some hidden numbers). 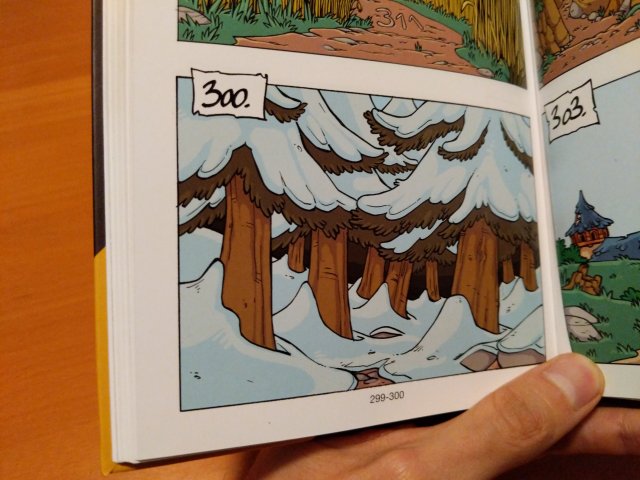 There isn’t a rule book per se, as the rules are sort of explained in the first few panels.  Get the book, start reading, and it unfolds before you.  In Captive, you’re rescuing your daughter, in Knights you need to collect a certain amount of bracelets in five days.

It’s difficult to discuss either of them without mentioning the other in the same breath.  Overall I certainly liked Captive more (“I Love It!”) than Knights (“I Like It.”)  Both of them offer what is still a fairly unique experience (Two things on that – firstly, I’m at a point in my arc through the hobby where unique experience often outweighs good game, so, generally don’t listen to me if that’s what you want – secondly, Makaka Editions makes a lot of these(!), they just only release them in French.  If that works for you, the world is your oyster – the catalog looks incredible.  [The second point was just that it might not be unique for long]).

I found the puzzles to be somewhat inconsistent – Captive had some that felt appropriately difficult, and others that required more attention to a few wall of text pages than I wanted to pay – Knights had some that were easy, some that were more riddles, some general knowledge, and, frankly, at least one that even knowing what the answer is supposed to be, I’m not sure how you’d get there.  That said, for implementation without an app or scissors or whatnot, they were pleasant.

I also found the overall structure, at least of Captive, quite engaging.  I mean the physical structure of the house you’re exploring.  As you go through certain doors, you’re sort of building a virtual model in your head, but I was always a hair shy on the full capacity of being able to map it out mentally.  Which rooms are connected to each other?  Doesn’t this hallway lead to the [redacted]? Right, this is the room that leads to the door with the [redacted] on it! It’s around here somewhere, don’t I get the [redacted] in this corner?  For me the compulsion was strong enough that I made a chart of the connections (available in the files section of BGG) because I wanted to really see how it all went together. (I think Knights was less enjoyable for me because this ability to mentally form a map seemed absent given the structure and some art choices.)

As a lunch time diversion and a road trip occupier, I’ve really enjoyed this.

Captive/Knights also gave me a certain comfortable nostalgic feeling.  I’m not a graphic novel person or an RPG person or even a comic book person.  But when I was a kid, I read the Almanac a lot.  I mean, a lot.  I’d be reading a list of largest earthquakes and then I’d go to read more about a country that was mentioned and then I’d go to look up its flag and then I’d see an adjacent flag and wonder about their olympic medal counts and then I’d look up things about metals and then I’d look up, well, you get the picture.  I read the Almanac the same way I play Captive/Knights.  (And not to be a luddite, but in the sense of a non-cell phone based activity, it’s nice to have such an engaging solo way to pass time that doesn’t require screen time.)

Though our odds currently look low for additional English-language releases, I will welcome with pen in hand (and wallet in the other) any future books.

Dale Y – I fell in love with Captive last year when I ran across it.  I almost didn’t get a copy, it was sort of an impulse buy at the stand – and only because the nice guy said he’s throw in both for the price of 1.  I “played” (or should I say read) Captive for the whole flight over the Atlantic on the way home, and I was pretty much totally engaged in the story and the book.  Unlike James Nathan, I never tried to map everything out – and I think this is what kept me so engaged with the book. I would go around and around looking for stuff.  And… though I’ll never look at JaNate’s map, part of me thinks that the house in Captive is impossibly big.  There’s just no way that all of these things can be under a single roof.

Anyways, when I was a kid, I loved playing the Steve Jackson and TSR adventure books, and these two (Captive more so than Knights) completely rekindle that love.  It’s been a long time since I’ve spent all day with an actual book – and I wish there were more like this to read through.  I did take French in grade school, and I’m wondering if that’s enough to play some of the other books in the Makaka catalog.

Captive
I love it! James Nathan, Dale Y
I like it.
Neutral.
Not for me…

Knights (Chevaliers)
I love it!
I like it. James Nathan, Dale Y
Neutral.
Not for me…