Alan How: Review of Sidereal Confluence: Trading and Negotiation in the Elysian Quadrant

Sidereal Confluence: Trading and Negotiation in the Elysian Quadrant 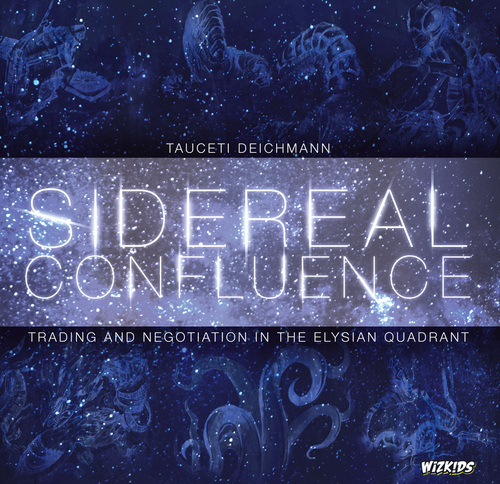 Sidereal Confluence is a trading game in a space setting that takes place over six rounds. Each player plays a unique race and has completely different set up and styles of playing. Over the course of the game players will produce variety of different goods, trade with one another, create and upgrade technologies and exploit the individual powers they have from their races.

To begin with players select one of the races and take all the components associated with the race. This includes a large two sided cardboard reference sheet that contains hints on how to play the race as well as more explanations about some of the unusual rules relating to that race. It’s very useful, well put together and can be referred to at any time as no one else necessarily needs to look at your reference information. In your first game there are some suggested races to play and I would advise to use these. Each race has a difficulty rating and perhaps not surprisingly the ones that are recommended for the first game are the lowest rated races. 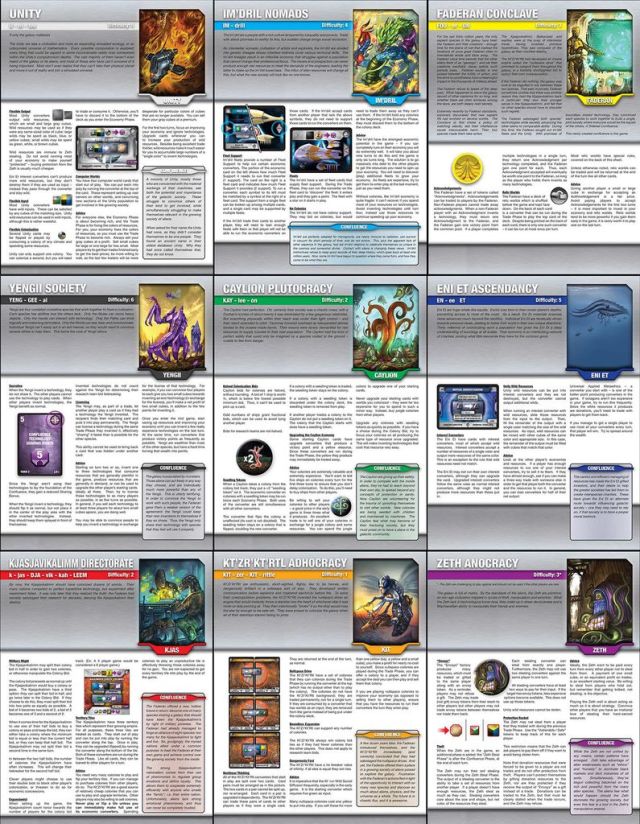 Once the setup is complete each player receives a number of different types of resources. These come in the form of different shaped and coloured wooden pieces as well as a bunch of cards. These include some starting technologies, planets and special cards associated with each race. In addition some of the players will start with some ships and special tokens to mark their abilities. The first race that I played was the XYZ who tried to add a trading token to the deals that they complete which earns a victory point for them when the other race manages to create a new technology. Of course the other players know this, so knowing this they might want to up the ante in order to take on this unwanted bonus.

Each round begins with a trading round where there is a free for all discussion of which resources can be traded. It is not just the wooden resources that can be traded: planets and ships as well as some of the cards can be traded some on a permanent and some on a temporary basis. Each player will have a number of production cards that need to be fed specific resources in order to produce a different set, in all cases worth more in victory points then the input resources. In addition planets can be mined to produce a low number of resources without any input required. So knowing this, each player has an understanding of what inputs and outputs will be received if no trading takes place, but it is always possible to improve your position through trading with other players. The game is set up in such a way that each player race will need resources that at least another race produces. This means that training is semi-automatically possible providing these two or three races start to communicate. At the end of this phase of the game, usually about five minutes, all the trades have been completed. The next stage of the game sees the inputs to production cards applied and the outputs produced. But the trading would be pointless if there was some larger goal in mind. 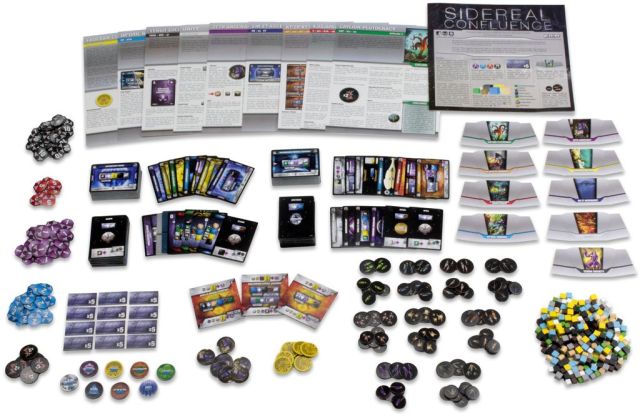 all of the bits

The last phase of each round is a bidding subgame to acquire new basic technologies and new planets. The technologies improve as the game progresses and generally it is important to acquire the when it is possible. The bidding currency is ships and this makes them important in the trading process earlier in each round. Some races have particular benefits at trading such as winning ties, while others might benefit from acquiring more planets as their race requires planets to improve their prospects. Some players may skip the bidding process either because they have too few (or maybe no) ships while others this will be on an important aspect of the game. It’s an interesting phase and helps to make the trading phase of the game more engaging.

The game provides a useful ready reckoner to evaluate the rough value of each resource in victory points. As each race has specific benefits the value of these goods may vary as well as the difficulty of establishing the value of a ship or a planet at a specific time for each player.

The following rounds follow a similar format but as the technologies improve and production cards change inputs and outputs, there is a different mix of resources required for each player each round. The changing environment is interesting and unlikely to be the same game to game so players will need to pay attention to the new opportunities.

At the end of the game resources on hand score half points and added to the accumulated victory points to determine a winner. In my limited experience games can be quite tight, but the experience is more satisfying. 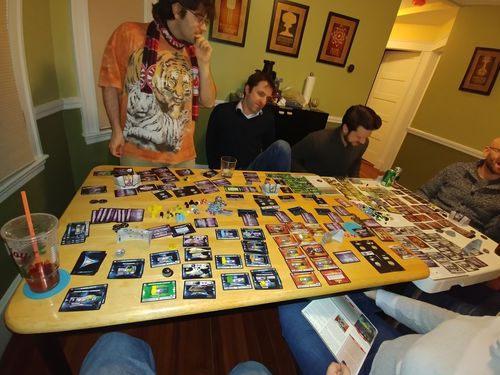 At the mention of a trading game, which is the central function of the game, some players will be immediately turned off. This is happened to me on a number occasions with this game and so it has not got the table as quickly or as frequently as I would seek. Which is a pity as the game has some intriguing ideas and the trading is more free format than might be expected.

There is a school of thought among some players that the trading aspect is very much like looking at the spreadsheet and as one player says I’ll give you two yellow for one brown. However, this is misguided in my opinion as the value of a set of commodities depends on your viewpoint. In this respect it is very much like the perspective of each player has on the commodities in the game Medici.

The resources quickly just become cubes and colours and shapes to be traded and do not have any bearing to the name is created by the designer. This doesn’t particularly matter for me but as the trading aspect is very interesting and engaging. I have found that players who have a symbiotic trading interest create their trade routes that might be difficult to break into. However the changing landscape of technologies means that someone might offer a better rate of return and then the original trading pattern is broken. The actual time for the trading goes by really quickly and so the downtime is vertical low. Sometimes you have finished your trades early; sometimes a new opportunity arises near the end of the trading time. When players are finished it is easy to call time.

The outcome of the games I’ve played this all players have really enjoyed the game. The range of different races means there is considerable replay value and the game takes far less time for you my think as the real-time aspect of trading certainly makes the time fly by quickly. I have only played with 4 and 5 players and these numbers seemed fine. I think three players would be too few nine players would be scary. Hopefully I will get my wish and find more players to try this with.

Nathan Beeler: Despite some healthy reservations about Sidereal Confluence being an incredibly long trading game, I went into my lone play of it with an open mind. The game seemed like it would be, aside from a core mechanism I don’t normally go for, something different. It also promised to scale to large numbers fairly well, and variable player powers is a particular favorite mechanism of mine. Indeed, Sidereal Confluence was all that. It was also just a fairly impressive design, creating the kind of asymetric marketplace an individual player arcs that I imagine the creators intended. There were so many possible ways to package deals that it seems unfathomable that a person couldn’t find some way to accomplish what they needed to within a turn or two. Don’t like this deal? I happen to know that I can get my hands on what you need next time, or from another player right now who desperately needs what I have and would be willing to give me favorable terms for what you need. While that wide-open freewheeling sensation would likely be a boon for most, to me it felt like the hell of a thousand choices. I just wanted a bit more structure to make the game a bit less stressful. Maybe that’s being unfair. I certainly didn’t hate it while I was playing, and I’m really glad I got a chance to try it. But when it was over I was happy to move on to something else, and I don’t see any need to experience it again.

2 Responses to Alan How: Review of Sidereal Confluence: Trading and Negotiation in the Elysian Quadrant