Chris’s Trip to the Gathering of Friends: Monday/Tuesday/Wednesday

This is my second post documenting my trip to the Gathering of Friends.  Today I wanted to highlight two games that have stood out: Ultimate Werewolf Legacy and Rise of Queensdale.  I’ve played an entire chapter of the former (3 games), and the entire campaign of the latter (20 games), and both have been a highlight of my convention experience this year.

I’ll do a couple more entries this week discussing more games.  I leave the Gathering on Saturday.

For quicker updates, follow us on Twitter at @OpinionatedGmrs.  I know some other OGers have been posting there. For other news from the convention, I recommend checking out the hashtag #GatheringofFriends or #GoF2018.

What games are people playing?

I think the “The Mind” still holds the distinction of being played more than any other game.  I also regularly ask attendees what their favorite new game is, and it is getting the most frequent answer.

At this point, I’d guess Decrypto has snagged the #2 spot, followed by Azul.

I’ve seen quite a few games of Ganz schön clever, a roll-and-write I briefly mentioned the other day.

After that, there are a large number of popular contenders, including a several popular prototypes.  I’ll do a prototype rundown later in the week.

Note:  I’m writing these quickly, and I’ve also made little effort to check terminology against the rulebooks, so I might call something different than how it is treated in the rules.  Since both of these are legacy games, I’ve kept the reviews spoiler-free. 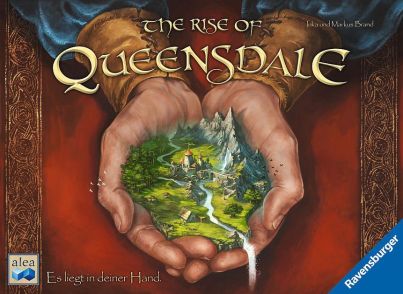 The Rise of Queensdale (Spoiler Free)

The Rise of Queensdale is a competitive legacy game from famed design duo Inka and Markus Brand.  The game is out in German, and an English-language release is planned for Gen Con. I was fortunate enough to play it in English with three other amazing attendees at the Gathering.  I’ll do a full review in the coming weeks, but in the meantime, here is a mini-review and some spoiler-free thoughts.

Rise of Queensdale is sort of a city-building game, with each player owning one of four different boroughs in the region divided by rivers. Players must gather building resources and use them to build new buildings and features into their borough.  Over the course of the campaign, a player needs to advance into nine different epochs (i.e. win nine different games), and the first player to do so wins the campaign. The game could, in theory, last anywhere between nine and 33 games, but in all likelihood I think most groups will finish it in 20-25 plays.  Our group took 20 plays, over about 25 hours. 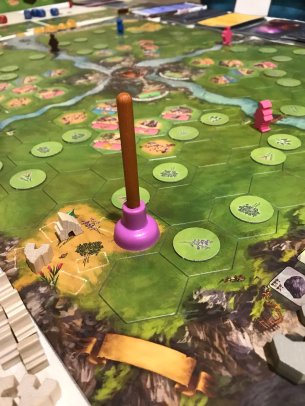 The game comes with a plunger — a royal plunger, in fact — to extract tiles on which you build new buildings.

The main mechanic is dice-based worker placement.  At the start of each round, players roll their five dice.  On a player’s turn, he places one of these dice one of the designated spaces corresponding to the result rolled.  For example, if a player rolls wood, he can place it on one of five wood spaces to receive one wood, or two if he is the first person to use the wood space.  All four of the basic in-game resources (wood, clay, stone, and coins) have their own face on the dice. The other two faces are for actions. To mitigate the luck factor, players may, at any point on their turn, reroll any of their dice by discarding a resource.  And payers may also spend the corresponding resource to use a resource die face as an action die.

There is a main action board showing the in-game actions possible.  These spaces allow you to build, convert resources, gather resources, walk around the game board gathering herbs, draw workers, or take special actions.  More and more of these spaces are added as the campaign progresses.

Certain in-game activities (building buildings, building huts to gather more herbs, or advancing on the glory track) earn you victory points.  All players start the campaign with the same goal — to get 10 victory points — but as the campaign progresses, the goal becomes higher and higher.  By the ninth epoch, players have to earn 70 victory points.

But as you progress, you are rewarded with more and more victory points for doing the same activity, so the game isn’t really longer later in the campaign.  If you complete your goal, you get to unlock upgrades for yourself, such as starting resources.

The game has a couple of decently strong catch-up mechanics.  The primary one is that if you don’t get to the next epoch, you take a seal, and you can get a second seal if you were close to achieving your goal.  These can be traded in for stickers that upgrade your dice.

As I said, it took us 20 plays over 25 or so hours.  I really enjoyed the campaign, and I’m glad I played it.  I predict this will be a big success in the U.S. market after Gen Con, and I could see Rise of Queensdale cracking the BGG top 100.

The game isn’t perfect, and my enthusiasm for it fluctuated over the course of the campaign.  At times I loved it, especially toward the start, but at times it felt slow moving and repetitive.  Most of the new mechanics come out when a player reaches a new epoch for the first time, and if that isn’t happening, the game can start to drag.  The game is more mechanically driven than story driven (though there is a story), so fresh gameplay elements are necessary to keep it moving. Even at the slow points, however, I was enjoying myself.

I also have a minor quibble that might annoy some gamers: the vast majority of our games only had three to four rounds — meaning we pulled back our dice and re-rolled them — so getting a bad roll can be damaging.  In the end, however, players can discard a resource to reroll.

The game felt exceptionally innovative, and it offers several mechanics that I could see being implemented into other legacy-style games.  And it also felt balanced: the catch up mechanics were decently strong, but the game also rewarded long-term planning. It was easy to learn at the start, though I’d still describe this as a gamer’s game.

The two most frequent questions people asked me at the gathering are (1) whether it was replayable, and (2) how it compared to Charterstone.  I don’t think it is particularly replayable: by the end, you’ve probably applied 100 or more stickers to the game board, action board, and rule book.  I do believe you can continue playing even after the campaign ends, but we haven’t done that.

Regarding the comparison to Charterstone, it is no secret that I wasn’t a fan of that game, and in many ways, I think Rise of Queensdale is the game Charterstone should have been.  Queensdale had some rules ambiguity at points, whereas it abounded in Charterstone, and here, gameplay was interesting throughout, whereas for me that never was the case in Charterstone.

Overall, I’m impressed.  I think many groups are going to love Rise of Queensdale, and the Brands have designed something that feels innovative and engaging.

I had the opportunity to play one chapter of Ultimate Werewolf Legacy a couple of nights ago, and I fell in love with the game.  I’m a huge fan of Ultimate Werewolf — it is in my personal top 10 — so it is no surprise that I love this newest creation from Ted Alspach and Rob Daviau.

The BGG description of the game is spot on: “Ultimate Werewolf Legacy uses gameplay similar to Ultimate Werewolf, but you no longer have single standalone games as players and the village itself have attributes that are retained between games, with events that take place in the first games having effects that ripple through remaining games. Make a bad decision early on, and it can haunt the village for years to come! Players can earn titles, which provides them with special abilities in future games, regardless of their role. Players are each given a public family card in addition to their secret role card, and they team up with the other members of their family to work together…unless one or more of their family members is secretly working against them.”

The game comes with five chapters, each of which consists of three games.  We played the third chapter, and I was highly impressed. It took us about 2.5 hours, and in our group of a dozen or so everybody seemed to love the experience.  In fact, Ultimate Werewolf Legacy is, thus far, my favorite game of the Gathering.

The game changes up Werewolf in cool ways.  As alluded to above, you are grouped into families, and you can team up with them to earn rewards that help in future games.  Your role doesn’t carry from game to game — or at least it didn’t for us in this chapter — but it is clear that there is a well-thought-out campaign component here, and your decisions in one game genuinely do affect future games, and even future chapters.  Each individual game feels like Werewolf — which that means that if you don’t like Werewolf, this might not be your cup of tea — but across the chapter it felt like an excellent storytelling experience.

Ultimate Werewolf Legacy feels like it’d be a perfect game for a weekend retreat at a log cabin, although it also seems well-designed for playing across a few different game nights.

And, in a nice bonus, it is replayable.  Given the structure of the campaign, I think many groups will enjoy recharging the game and seeing how different results branch through the game concept.

If you love Werewolf, I highly recommend Ultimate Werewolf Legacy.  Its release date can’t get here fast enough: I can’t wait to assemble my village.

What else I’ve been playing…

6 Responses to Chris’s Trip to the Gathering of Friends: Monday/Tuesday/Wednesday