Once a month during the brisker times of the year, I spend my Friday nights at a science lecture.  It’s a group of retired folks from a wide spectrum of backgrounds, but all of whom are avid and skilled outsider botanists in their retirement.  The group’s specialty is wildflowers, but the lectures run a broader gamut, and recently I attended one that focused on the retinal structures of the two forward-facing sets of eyes in certain jumping spiders.

We learned about their culinary and sexual attractions to different colors; their adaptability to changes in these realms; the use of red filtering cells to allow green-detecting retina cells to observe red; their use of muscles to contort their eyes inside their head, so as to adjust their focal point, without turning their head to bely their position; and how the placement of their retina cells counteracts chromatic aberrations.

He also talked about various technologies that have directly and indirectly taken inspiration from discoveries of jumping spider and other animal behaviours.

One thing that must’ve slipped the presenter’s mind is the avian behaviour that has inspired the nestorgames for today, Volo and Feed the Ducks.

I first came across Volo as I was falling down the LUDI rabbit hole and stumbled across Cameron’s Games & Puzzle Design Journal. The articles are refreshing in their academic approach to game critique and theory.

One of the full sample articles you can read is Dieter Stein’s case study on Volo, and I fell backwards from there into Feed the Ducks.

In Volo, new birds enter the scene (placing a piece), and birds flock together (moving previously placed pieces).  New birds cannot be placed adjacent to birds of yours, and when moving birds, you move a line of them and must increase the size of the flock (and cannot break up an existing flock, but can rearrange it). If one player’s pieces ever wholly isolate part of another player’s flock, you pick a region to continue using and the other pieces fly away, having lost track of the flock.  Victory is having all of your birds on the board in one flock.

Feed the Ducks has you place pieces around the outside of a Yavalath board (a hex of hexes, 5 on-a-side) to set up.  On your turn you throw a bread crumb into the lake (I use a red disc), and any ducks on the six lines radiating out from that hex swim towards the breadcrumb.  You alternate turns throwing breadcrumbs (you can’t place along an axis that was used by the previous crumb), until all of one player’s ducks are in a group. (The ducks stay hungry throughout, as the fish always get to the crumbs first.) 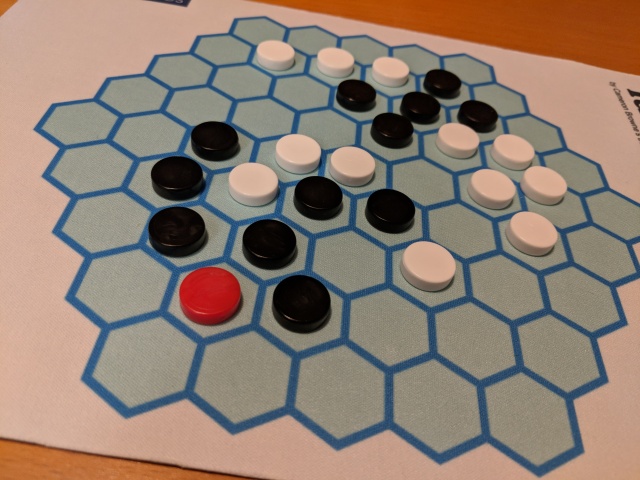 If you’ve been reading along, these are the last of the abstract/combinatorial reviews from me this week, but if you’re somehow creepily in my house watching over my shoulder, you’ll know these are the first to be written.  Which is to say, I may have said it earlier this week already, but I struggle to find the vocabulary to discuss my feelings on these games because I’m out of my element.

Volo was interesting in the sharp pivots of style as the game progressed.  It started as a Ricochet Robots style game – thinking about where to add new birds, so that in the ensuing turns, you pick up all your chicks and the family is in one big happy V.  But as your opponent does the same, the tension mounts to pull the trigger and start moving before your moves are blocked – and the game takes on a more traditional abstract tone. Yet, soon the works are all gummed up, the fog has rolled in, the birds are flocking together, and it is becoming apparent that the region aspect of the game is taking on a super-sized importance – and it takes on a Go-ish territorial feel.

Feed the Ducks doesn’t feel like much else- and in a way, feels like you think Volo should – like a flock of starlings undulating in groups and waves across, around, and through the board. (Though perhaps this tilts it more tactical and less strategic than I generally prefer.) At times it feels like it may not end, but there are alternate ending conditions that require >x pieces in a group, rather than all.

Both of these games are somewhat betrayed by Tuesday’s titles, and the puzzles below that I’ve decided to group with them.  That is to say, these birds don’t have the sort of light hollow bones that skew your weight guesses in Fauna – rather, these are more involved affairs.  One of the tricks for me in playing the titles for this week -what I felt would be enough to give you my thoughts- was I didn’t know how to play abstract games.  There’s an archetype in my mind for a regular weekly gaming night with my group, but at first I was struggling with how to fit this into it – based on player count, and a desire to move on to whatever our entree would be, they would get too short of shrift.  I tried playing titles at other gaming events, and those didn’t work out either so, well, you know, I, uh…resorted to just asking some friends if they wanted to come over and play some short abstract games for a few hours.

Turns out they did.  I’m someone who keeps a “Friends Rotation” – for nine friends/couples/families that I want to, but fail to, consistently spend time with, I setup an occasion to spend time with whomever is on the top of the list, and once that is over, I move them to the bottom and set up a time with the next person.  If you come to me and cut in line, that’s fine, but I’m moving you to the bottom of the list.

Which I guess is to say that the two nestorgames’ nights that I had were a great way to catch up with friends (neither of whom were in the rotation). For a game like Yavalath – where the rules can be boiled down to around 2 sentences, and less if you love semi-colons – I didn’t need to spend time consulting a rulebook or explaning many rules. That isn’t to say we took the games lightly, but Yavalath, Manalath, Pentalath were over in relatively short order, and conversations could be had during and between games, and it was pleasant to not only enjoy these games, but catch up with old friends.

What I’m saying is, that was a little harder here.  For these, I fell back into my comfort zone of more effort strategizing, and less effort socializing.

Enough about that- onto some miscellaneous things I wanted to include.

In reading through Cameron’s Geek of the Week answers on BGG, where the answer to your question is probably either Hex or cheese, he also mentioned Slitherlink and Killer Sudoku.

Slitherlink is a sort of Minesweeper variant, and started in the Japanese puzzle magazine Nikoli.  Below is an example of a hex-variant from an app I was exploring it on, though square would be more traditional.  A number in a hex indicates how many edges will contain a line, and each vertex can only have two edges emerging from it.  When you’re finished, there should be one continuous loop.

As with Yavalath, Manalath, and Killer Sudoku below, one of the aspects I enjoy about this week’s titles is the patterns that you learn to recognize or make.  For instance, here as you explore, you learn that two “5” hexes next to each other mean I can go ahead and mark this and this and this, and then there can’t be an edge here, here, and here, etc.  At first you’re mentally walking through the combinations, but soon you’ve made yourself a little library in your mind of some common structures.

I found Slitherlink to be a delightful and addicting distraction. 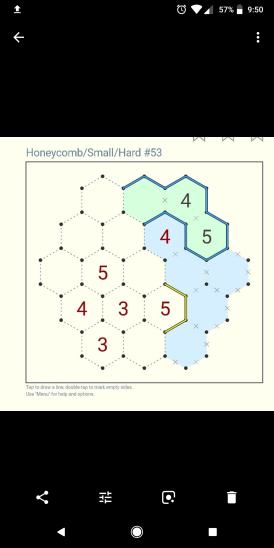 Killer Sudoku is a combination grid of Kakuro and Sudoku, and from the examples I’ve done, you’ll likely start with an empty grid. The overall grid will follow Sudoku rules (e.g. each column will consist of 1 through 9, each row will consisted of 1 through 9, each of the nine 3×3 boxes will contain 1 through 9), and the numbers in each colored shape, will add to the sum shown.

When I first started these, it was taking me around an hour do to one, and sometimes I wouldn’t have any numbers for certain until 30 or 40 minutes in.  But just as I was saying with SlitherLink, eventually you learn some patterns. What I don’t enjoy about Sudoku, is that the patterns feel more like tedious algorithms that I run through enough times and it solves itself.  What I’ve been enjoying here, is that the patterns I learn aren’t sufficient for long. As you progress to more difficult puzzles, you will need new and different tools -ones that you’ll need to derive from the structural rules- to complete each grid.  I’ve enjoyed several “a-ha!” moments as a new way to slice and dice things hits me on the head, and my average time has dropped considerably.

(Are you really still reading?  Well, thanks. It means a lot to me.)

While I’m at it, I saw designer Brett Gilbert tweet recently about Gogen, which was new to me at the time:

‘Gogen’ puzzle in the @EveningStandard. Not seen this idea before. Very satisfying solve! pic.twitter.com/KdCq2p6105

It’s a sort of Boggle-Sudoku mashup – you’re presented with 9 letters in the grid, and a list of words that you’ll need to be able to trace in the completed grid.  It’s up to you to find where 16 other letters fit in just so. I found these provided a pleasant alternative way to think about word puzzles. 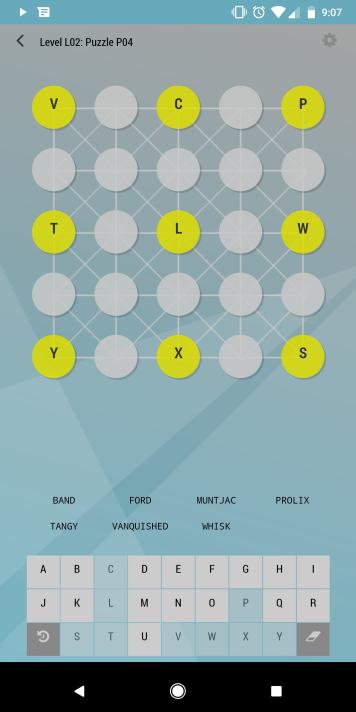 (I took several screenshots to use, but am using this one because it has Prolix for my friend Gil, and muntjac for me- look it up… adorable, right?)

One of my immediate thoughts after playing Yavalath was “I wonder what Cameron is up to these days” and “When can I play whatever some sort of LUDI II produces?” In tomorrow’s post, I try to ask Cameron some questions in a non-leading manner, and see where he takes us.

I love it! Lorna
I like it. James Nathan
Neutral.
Not for me…

I love it!
I like it. James Nathan
Neutral.
Not for me…