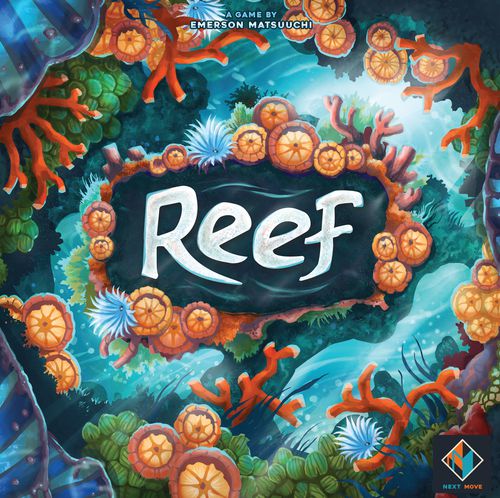 Reef is the new release from Next Move games (a new game label from Plan B) – also designed by Emerson Matsuuchi, the designer of the Century series of games.  In this colorful game, players try to grow their coral reef in the best way possible – that is, the way that scores the most victory points.

Each player has a board which is a 4×4 grid on which they can build their reef.  Each of the sixteen spaces can hold a tower of coral pieces (which come in four different colors) in a column that can be as high as four items.  At the start of the game, players get one of each color coral and place them in some arrangement in the four central spaces on their board. The victory point markers are sorted by type, and each player gets three 1-VP tokens. 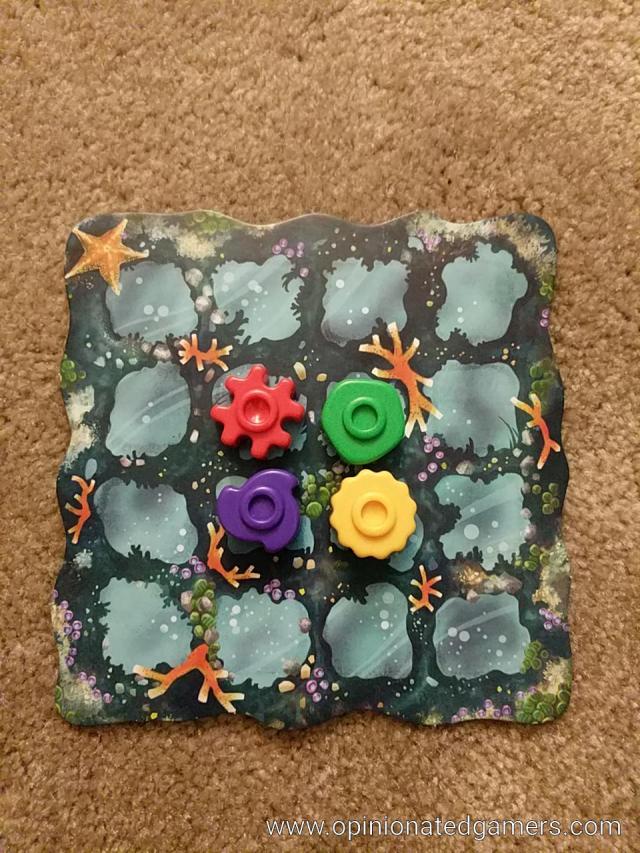 There is a deck of cards which is shuffled and placed in a FACE-UP deck.  The top three cards are placed on the table to form a tableau of cards to choose from.  The cards have two different areas to them. The top of the card shows two coral pieces on a white background – this represents the building action of the card.  The bottom of the card shows a scoring pattern of coral as well as a scoring value in the bottom right corner.

The game is played over a series of turns until one of the colors of coral pieces runs out.  On a turn, a player may only do a SINGLE action – either adding a card to their hand OR playing a card from their hand.

When you draw a card into your hand, you can choose one of the three face up cards in the display.  If so, place that card into your hand and take the top card from the deck and move it to this newly empty space in the display.  You could also choose to take the top card from the deck. However, if you do this, you must take a 1-VP chip from your personal supply and place it on the car with the lowest printed point value on it in the display.  Note that you have a hand limit of four cards. You may never draw a card if you already have four in your hand. In this case, you must choose to play a card. 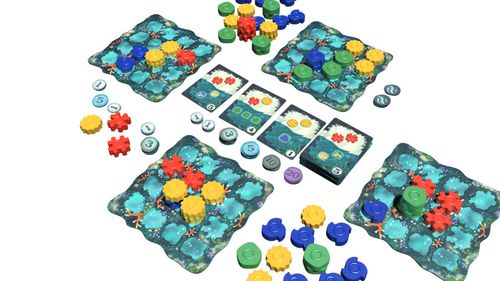 When you play a card from your hand, first you look at the top portion of the card and take the two coral pieces shown on the top half and add those pieces to your playing area.  They may be played to empty spaces on your reef OR on top of other pieces. Remember that there is a limit of four pieces in any particular column. Once the pieces are placed, they are not moved for the rest of the game.

Once the two new pieces are added to your board, then you check the scoring pattern on the bottom of the card.  For each time you see the pattern on your board, you score points equal to the number in the bottom right of the card – though there is a limitation that each column can only be used once per scoring card.  When considering the scoring patterns, you only use the top down view of your board – that is, each column is only considered for the color of the highest piece on it. The pattern on the scoring card can be found in any right angle orientation.  There are a few patterns which have numbers printed on a the pattern; in these cases, scoring only occurs if the colored pieces are also found on the level number printed on the card. 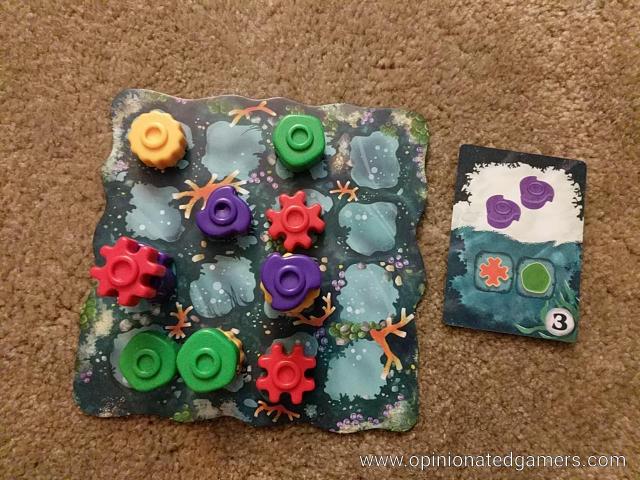 The game continues until one of the four colors of coral is exhausted.  The game goes on to the end of the current round so that all players have had the same number of turns.  There is a small amount of end game bonus scoring – all players look at the cards which they have remaining in their hands at the end of the game.  If the pattern on the card is met, each card can be scored ONCE (regardless of the number of pattern matches in your reef). The player with the most points wins the game.  If there is a tie, the player with the most stacks of coral that are four pieces high wins the game. 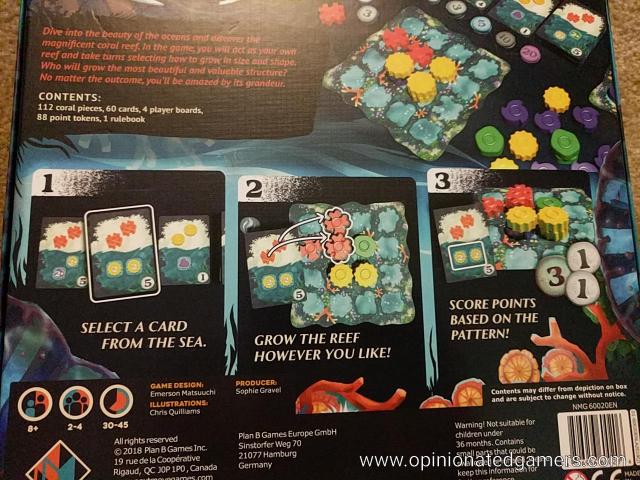 the rules are so simple, the back of the box pretty much tells you all you need

Though I’ve only played three games by Mr. Matsuuchi, he is becoming one of my favorite designers. I like the way that he incorporates the idea of microturns in his game.  Each turn, you can only do a single action, and it often takes multiple plays to put yourself in a position to score points. While the individual actions here seem to have slightly more individual importance than in Century: Spice Road you still definitely have the feeling of incremental building in this game.  This sensation also meshes in nicely with the theme of building a coral reef – which is, in reality, also an activity of incremental building.

The trick here is to get into a situation where your cards and board situation chain together so that you can score each turn. Early in the game, you will play cards that you really don’t have much chance of scoring – yet, you need to play them in order to get pieces onto the board.  By mid-game though, you’d like to be able to play pieces to set up a later scoring card while also being able to take advantage of the current scoring situation on the card that you are playing.

You’ll constantly be keeping an eye on the card selection in the display, always looking for cards which will chain together well with either your board or the other cards in your hand.  There are plenty of times when it will be worth spending a VP to get the right card. Don’t be afraid to buy the top card from the deck! 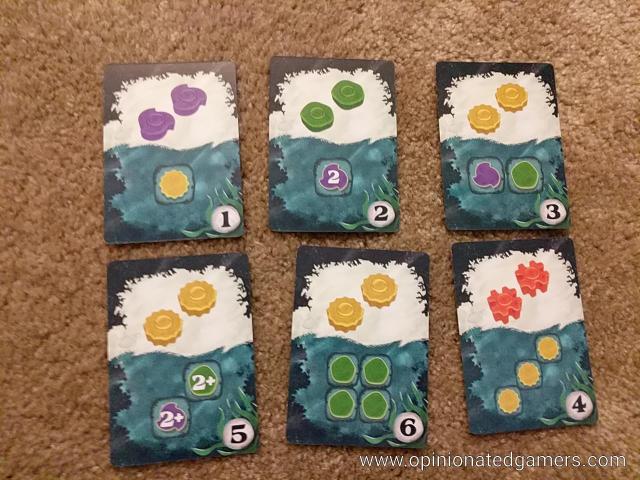 examples of the different types of cards

Turns move insanely quick.  Drawing a card only takes a few seconds – sure, you have to wait until your turn to see what your final options are – but usually you’ve already figured out which card you want and you’re just hoping that the player just before you doesn’t take it from you at the last moment.  If you are choosing to play a card, you’ll likely already have mentally placed your two pieces and calculated your score when the play comes back around to you.

This has become one of those games where our group has to say “Done” at the end of each turn because sometimes turns happen so fast that people haven’t realized that a turn has happened!  Games are getting down into the twenty minute range now, which might be a bit fast, but surprisingly – the games don’t feel rushed. Like Century: Spice Road, the game moves along at a very satisfying clip with very little downtime despite the fact that you really don’t do much when it’s not your turn (other than hoping that your opponents don’t take the thing that you wanted to take!)

The pieces are wonderful – the chunky Bakelite-like material is nice and hefty in your hand, and adds to the whole experience.  The game has been made nicely color-blind proof by having different shapes as well as colors for the coral pieces. The rules are well written – only taking 3 sides of the small square rule pages.  It’s the kind of game that can be taught in three or four minutes, and players really shouldn’t have any questions about the flow of the game after just a few turns. 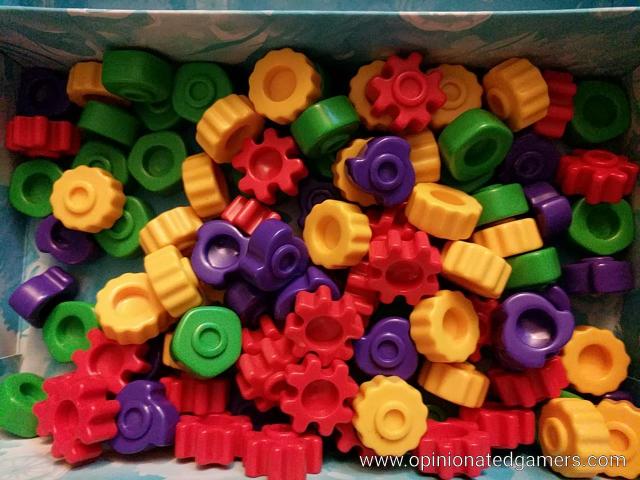 I fell in love with this game at the Gathering, and my plays with the final version have done nothing to change my opinion.  This will have a permanent place in my game collection as both a super filler as well as a great gateway game. Though games released this early seem to never fare well in the SdJ race, this would be my instant frontrunner for SdJ 2019…

Dan Blum (1 play): I enjoyed it but it’s definitely the most random of Matsuuchi’s games so far. You need to collect cards that chain usefully, so if you start by playing pieces in certain colors you want to get cards that score for patterns using those colors which you can play later. If none are available for a while you have problems. I don’t think this is a major issue, it just means the game is fairly light and needs to be approached with that in mind.

James Nathan (1 play): It was fine. I’d be happy to play again, as it’s fairly short, but overall too tactical for me.  Dan’s comments echo my feelings well.