In this newest expansion to the Legends of Andor, Dark Heroes provides the gamer with a four new heroes that can be thrown into the fray.  Each has their own special ability that can help the group.  These heroes are meant to be used with the third installment of the series: Legends of Andor, The Last Hope

The new characters include:

Darh, the necromancer – she can can move the golem up to four spaces for one hour – of course, the Golem has to have alredy been summoned. If the golem stands on a space with an enemy then the attacking heroes will gain six strength points

Forn, the half-skral –  Forn can spend willpower instead of hours for movement, but only if she follows the arrows. In combat all similar rolls are added (helmet effect).  However,  if a creature lands on the space Forn is in, the creature advances one more step 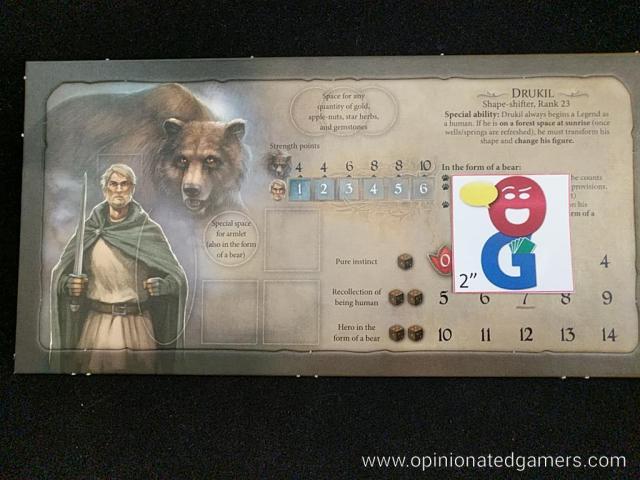 Leander, the seer – He rolls 5 dice at the start of the game, and they are placed in order on his board.  Some of these can be discarded based on his willpower. When fighting Leander must use the top-most die in his dice-list. When all dice have been used he will reroll and remove again based on his willpower. When the top die is a “1” Leander can look at a facedown token on the board.

The other big thing here is that you can now play the game (well at least the scenarios from Andor 3) with 5 or 6 players! Previous to this, you were limited to a maximum of 4.  The timing mechanic is somewhat changed – there are now 4 black time markers used (instead of one for each hero).  When a hero does something, he chooses any one of the 4 markers and moves it. If there is a fight, each participating hero must move a marker forward (multiple heroes can choose same one).   The day ends when all heroes have voluntarily ended – now shown by lying their figure down on the board.

As there are more heroes to fight – the bad guys need to get stronger as well.  There is now an additional black die which is rolled with every non-boss battle.   The boss enemy is assisted by the black herald which gives the boss more strength. 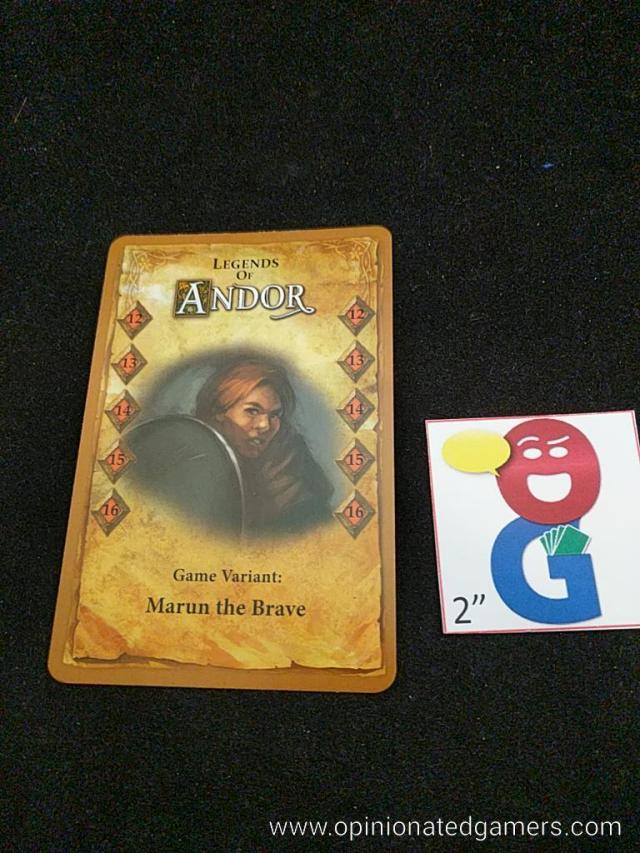 Additionally, there are a few extra event cards which are added to the deck – they are denoted with 5 and 6 player icons on their back side.

The components in the box here should give you more diversity in setup as well as allowing you to play with a larger group should you have more than just 4.  I actually have not yet played the game with more than 4, but it’s great to see that this is now a possibility. I will say that I have been part of a group that played with 5 on a Legend in the first box, with all of us just mutually making the decisions for the four heroes – but this is much better giving each of the players a hero of their own.

Imhotep was one of the 2016 games which I felt didn’t get the attention it deserved (though is it really possible to say that about a game nominated for the SdJ?!).   It was a game I saw being played everywhere when it first came out, but have not seen much since.  Imhotep is a challenging game which offers a lot of strategy in a short time frame.  The game has a variable setup which gives many possible different ways to play – as you can choose either side of the five monument tiles to play on, this gives you 32 different options on how to play.

Our initial review of Imhotep is found here: https://opinionatedgamers.com/2016/06/27/imhotep-game-review-by-chris-wray/

In this expansion – which was released in Germany in 2017 but has just recently made it to US distribution via Thames&Kosmos – you get a whole bunch of components that further increase to the variability of the game.  There are new double sided site boards, now giving you 4 possibilities (A, B, C, or D) to choose from.  You can pick and choose how and if you want to add these into your game.  There are also some new market cards which can be added to the deck. 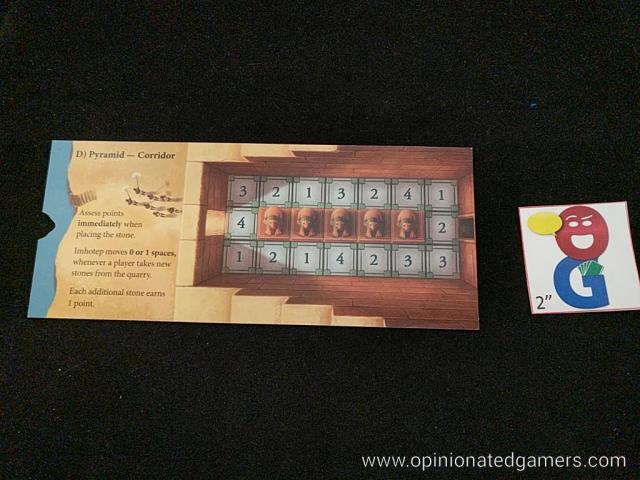 There is also a new module, the Prophecies of the Gods, which is included in the box as well.  You can choose to add this module onto your game if you want.  If you use the prophecy module, you place 3 of the 7 Prophecy cards next to the site boards, and each player gets 2 scarab tokens to use.  During the game, you can place one of your scarab tokens on a prophecy card – and then you will score points at the end of the game if you have fulfilled the stated criteria on that card at the end of the game.  Each player has equal opportunity to place a marker on each of the cards; but players are limited to being able to only make one prophecy during Rounds 1+2, one prophecy during Rounds 3+4 and one prophecy during Rounds 5+6.

Now, you’re looking at 2,048 different ways to set up the game [(4^5) x 2], and this doesn’t take into account the different ways the game can play depending on how you add the market cards to the deck…  Surely you’ll not run out of options to play the game now!

The new monument tiles all fit in well; they keep to the overall theme of the original sides but provide slightly different ways to use the blocks in the game.  The question that I always have with expansions like this is:  did PWH have all of these options in his mind when he created the game?  Or are these extra ideas which were just added in after the success of the original.

After a few plays of the game, I find that I like more of the C/D sides than the A/B sides… so I’m guessing that the full game was pared down – possibly for cost reasons, possibly for simplicity’s sake – for the release.  Going with simpler monument tiles does engender a more family-friendly game, and this in turn probably propelled it for the SdJ nomination – so, in the end, probably a great move.  Of course, this is all speculation on my part…  But, for gamers who enjoyed Imhotep and are now looking to re-visit in with a bit more complexity; this could be right up your alley.

Dale Yu is the Editor of the Opinionated Gamers. He can occasionally be found working as a volunteer administrator for BoardGameGeek, and he previously wrote for BoardGame News.
View all posts by Dale Yu →
This entry was posted in Preview. Bookmark the permalink.