TIMES PLAYED: 5, with a copy I purchased

Men at Work is a well-known Australian band from the 1980’s. Despite not being around for long, they have  a couple of songs that seem to still be played today.  Oh, wai – that’s not the Men at Work I am supposed to be talking about.  I am supposed to tell you about meeple-men at work.

Men at Work is a dexterity game for 2 -5 players.   Players take on the role of construction workers, trying to safely build their piece of the structure. Sounds easy, right? Well, not so much – you’re going to be asked to do some things that are not quite standard building procedure.

There are support pieces, which form the base of the structure, as well as wooden girders in four colors that are used to grow the structure.  In addition you have a supply of wooden bricks and beams, along with meeple construction workers.

There are also cardboard safety certificates – every player gets a certain number to start the game – as well as victory point tokens and an instruction deck.

The instruction deck is shuffled and the Boss Rita card is inserted about a quarter of the way down into the deck. The start player decides where the supports will go and then places one girder of each color onto the supports. They place one worker on a girder of their choice and the game begins. 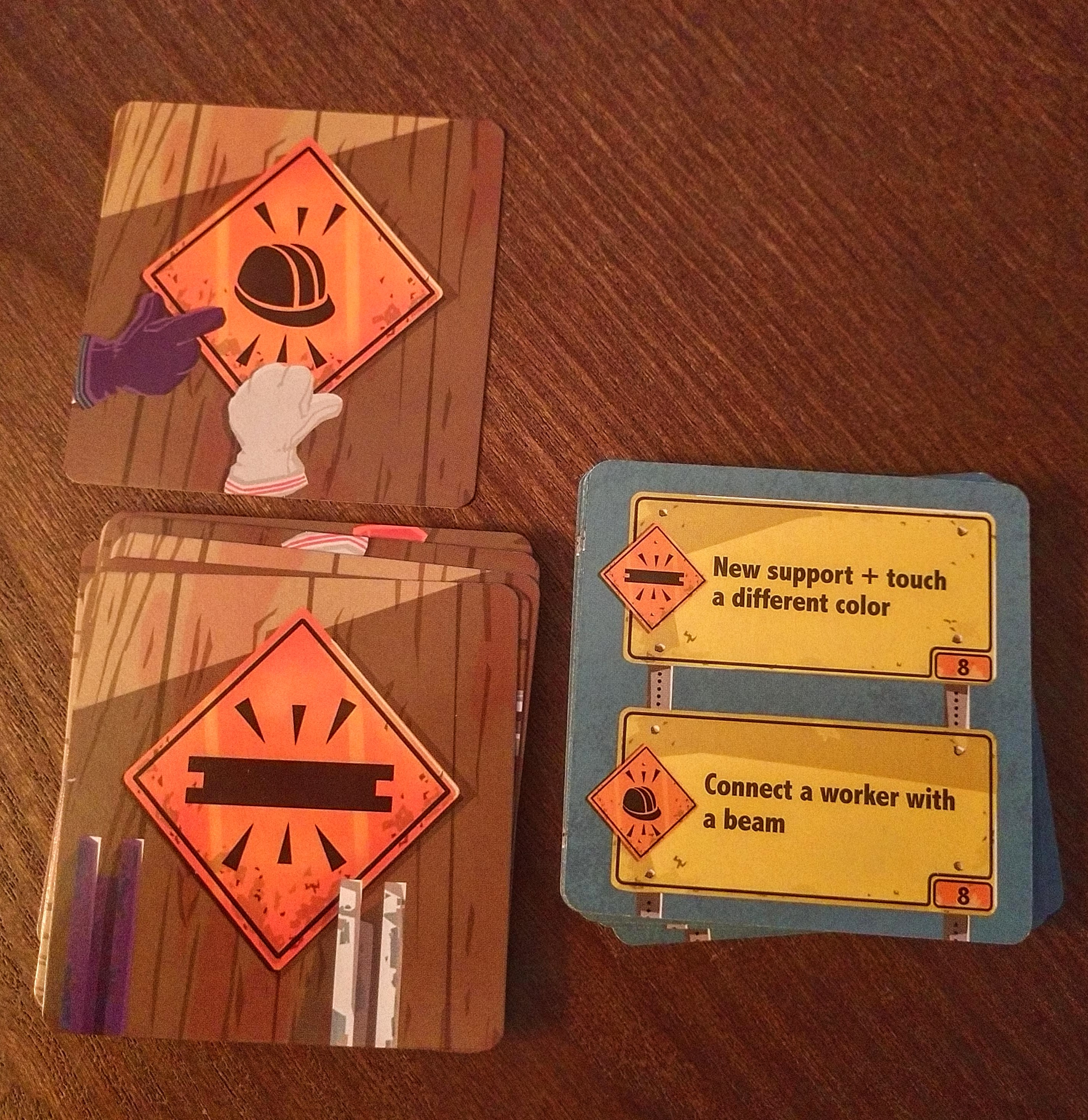 On your turn you flip over the top card of the instruction deck. The card that is still face down on the top of the deck will tell you what you have to add to the site – a girder or a worker – and what colors you may use. The card you just flipped over will give you the specifics of that action. So if the card that is face down shows a girder, you’d look at the girder instruction on the flipped-up card and follow that instruction – place a girder touching another girder of the same color, touching only one other girder etc.  If it shows a worker you place that worker following the instructions; workers can be placed alone, or they can be required to have a brick or beam. In the latter case you would place the worker first, and then place the brick or beam on them.

There are some rules for how items can be placed. You can only use one hand, and your hand cannot touch anything except the piece you are placing. You can use said piece to try to move or adjust other pieces already in play.

After the accident, the next player uses the cleanup hook to retrieve all pieces that fell on to the table; these pieces are returned to the general supply. Since nothing but the supports can touch the table any girders with one end touching the table must be pushed back on to the structure. If any pieces fall to the table during cleanup, that player loses a safety certificate and passes the hook to the next player.

Once the Boss Rita card comes out, players get a Worker of the Moth award (victory points) at the end of their successful turn if they have placed a piece that is the highest piece on the site. The cleanup hook has a handy measuring stick on it for those situations in which the highest piece isn’t clear.

Play continues until either one player has the required number of Worker of the Month certificates (between 3 and 5, depending on the number of players), in which case that player wins, or until only one player has any safety certificates left, in which case that player wins.  The game could also end if you run out of construction materials, but this is unlikely; if it were to happen the player with the largest combination of safety certificates and Worker of the Month awards would win.

The rules include some variants. One, the foreman, gives each player two cards at the start of the game. On their turn the player can choose to play one of their cards to replace one of the instruction cards.

The next variant is called Crane and involves placing the cardboard crane in the middle of the site at the start of the game.  The crane can be used as part of the structure.

The final variant (and the only one I haven’t tried) is called Skyscraper.  Instead of using supports to build the structure on the table you place the girders directly on the box insert and build from there.

I am not normally much of a fan of dexterity games. No one has ever called me graceful without a sarcastic tone in their voice, and I can bump into things or knock things over like nobody’s  business, so dexterity games generally are not my forte. Give me a good old-fashioned strategy game any day. However, I do often play games with non-gamer friends and family; having something that will draw them in or work well for a wide range of ages is a plus. This one grabbed me right away, and I ended up purchasing a copy.  It is the kind of game that can be played by a wide variety of ages and gaming abilities, and it has the potential to draw in  the non-gamers at a family gathering.  Sure, you have to have some skill in placing the construction bits, but you always have some choices in where to put them, and there are usually options that at least might work. The structure is stable enough in general that you don’t have to hold your breath, although players do have to be careful not to jostle the table.  The cleanup aspect of the game is also pretty fun; it’s a different challenge trying to fish that brick out of the somewhat collapsed structure without knocking anything else off.

The insert for the  box is great,; it is well-designed to hold all of the bits and keep them from shifting around.

And the bits? Well, the bits are, well, they are adorable. I mean, meeples wearing yellow construction helmets? What more could you want?  Aside from the cuteness, everything is well-made. The building components and the meeples are all wood (well, minus those hats) and are smooth with no rough areas or imperfections.   The safety certificates, crane and cleanup hook are all cardboard but seem to be sturdy enough to hold up.

Brandon Kempf: Colin Hay is one of the most underrated songwriters and vocalists of the 80s, but that’s not what we are here to discuss. Pretzel Games has a knack for producing quality dexterity games, I love that Plan B has branched out into this market with their label. Men at Work is indeed their project that seems more non-gamer friendly, and it works for what it does. Some of the moves are a bit more difficult to pull off than the others, balancing bricks or beams on the shoulders of the workers while finding the correct place to place them but nothing here screams overly difficult, and it is a stunner to see on the table when you walk by. I prefer Junk Art, but Men at Work is a fantastic stacking game.

Fraser: As I come from a land down under, I only came here for the vegemite sandwich.

I love it: Tery

Not for me: JoeH

2 Responses to MEN AT WORK