Dominion is one of my all time favorite games. Though, I’m biased as I was one of the developers of the base game and worked with the designer and publisher thru Dominion: Prosperity.  Since then, I have had no involvement in the series, but I still remain a great fan of the system and the game. (I have no stake in Dominion Menagerie at all, I’m just a fan boy like everyone else now!)

This newest set is the twelfth expansion to the original game, and there are a number of exciting and interesting ideas injected into the Dominion world with these cards.  This is a “full” expansion – it comes in a full size box and includes 400 cards.  I would like to talk about the three larger themes found in this box.  I will leave the descriptions/previews of the new cards to Donald – as he has already provided a number of preview articles on BGG, and there’s no reason to re-invent the wheel here…

Note that Dominion Menagerie is an expansion set to Dominion. If you’ve never played Dominion before, the rest of this preview/review isn’t going to mean much to you… You could look here for more info on the original game…

But, back to the over-riding themes in Menagerie

Exile – Players now have an Exile mat for cards to rest upon.  These cards are still owned by you, and they will count towards your scoring at the end of the game – however, while they are in Exile, they are not consider part of your hand.  All cards in Exile are face up and can be searched by any player.  Interestingly, anytime that you gain a card, you MAY choose to discard ALL copies of that same card from your Exile mat.  There are a number of cards in the set which use the Exile feature – my favorite so far is Stockpile; it is a cheap Gold; that is a treasure card worth 3 coins, but when you play it, you must Exile it.   There are some interesting card interactions here; you can use Exile to hide cards from coming back up in your hand, like a VP card – though other times, you want to get cards back from Exile to use them again (Stockpile, for instance).  Some of the Landscapes also involve Exiled cards. 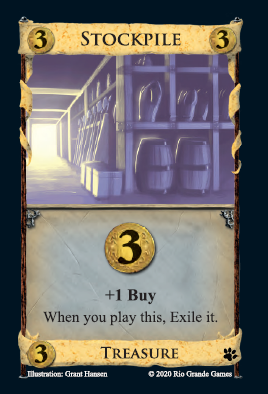 Way Cards – there are 20 Way cards in the deck, they are sometimes called Landscape cards not because they have bucolic imagery of the countryside on them but rather because they are player longwise (i.e. landscape vs portrait orientation).  I haven’t heard anyone refer to the bulk of the cards as Portraits, but I guess I’m starting that trend as of now.  Way cards can be added to the setup, though, in general, it’s recommended to use only one Way card per game, and no more then 2 Landscape cards per game.  Note that the Landscape cards do not count as part of the 10 Kingdom cards in the tableau, they are extra, and simply sit next to the Supply piles.

Each Way card gives a new rule which can be applied to any Action card.  When you play a card, instead of using the action printed on the Action card, you do what the Way card says instead.  This gives a whole new level of flexibility to your turn, though all players have the same ability to use the Way card… It can help you make something out of a bad hand though, assuming that the special action of the Way works with your chosen strategy.

I have found that sometimes I try to craft my strategy to take advantage of the Way ability, but it can be equally powerful to zig and avoid it completely if everyone else is going for the Way… 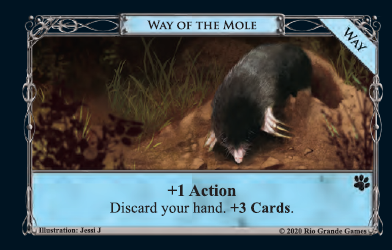 Events – The Event card is the other sort of Landscape card found in Menagerie.  If you are a Dominion veteran, you may have already come across this type of card in Adventures or Empires.  An Event card simply sits next to the supple, and during your Buy phase, you can choose to pay for an Event (cost in the upper left corner), and take whatever special effect is listed on the Event card.

I have been fascinated by the idea of the Populate card, but I have yet to figure out how I would ever effectively use it.  I mean, by the time that I have a hand that can generate 10 gold, I probably already have a decent strategy in place; not likely a deck that I want to have one of every Action card left.  I suppose I might want to use it to somehow empty out multiple Action card slots?  Still not sure, but I actually am taking this as a challenge to figure out how to use it.  Of course, like the other Events and Ways, all players have access to the card.

Horses – Horses are a non-supply pile; they sit near the supply, and you take them when you need them. 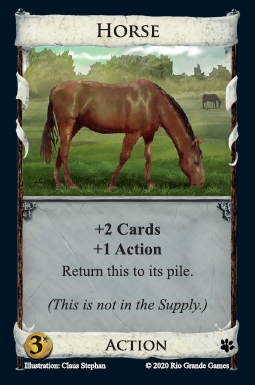 The horses have a nominal cost of 3, but you never pay for them – you only get them when other cards direct you to take them.  But then once you have them, you might be able to Remodel them or do other fun things with them.  They are really rarely detrimental though, because no matter what, they are kind of like a Laboratory in that they replace themselves – though with an extra card! – and you get your action back.

Weird buying costs – Finally, there are a few cards in here that have alternate costs – the tip off here will be the asterisk in the cost area.  Horse, just described above, has a cost, but you never pay it.  Other cards, like Animal Fair, have a cost, but they can also be purchased in an alternative way.

Keep your eye out for these asterisks and make sure that you know all your options!

Overall, there are a lot of neat card ideas in Dominion Menagerie, and so far, I’ve had a good time experimenting with them.  To date, I have really only played these cards with themselves – I don’t want to dilute my chance to experiment with all of them.  However, soon, all of these cards will go in my huge 2-part Dominion carrying case, and they’ll be mixed in along with everything else.

In general, I like to just plug stuff into one of the Dominion picker apps, and then just see what is on the table. For me, my favorite challenge in Dominion is the Turn Zero bit where you look at all the cards, ways, events, etc on the table and then figure out what you want to try to do.

One thing to note is that some of the cards are a bit more complex.  This is a natural consequence of this being the twelfth expansion!  All of the simple cards have already been made – it simply follows that the later cards are more complex…   The supply tableau also now can get a bit crowded as there are plenty of extra things that you may need next to the Supply cards, and each player might end up with one or more player mats.  Such is the price to pay for continued innovation in this Dominion universe!

The rulebook has eight pages of clarifications and explanations for the cards.  Honestly, most of this text is straightforward, and probably didn’t need the explicit explanation, but having the common sense rulings printed out in the rules will stop a whole bunch of rules lawyering arguments before they even start.

Don’t be scared off by the amount of clarifications, the cards so far have really been mostly easy to follow.    Some of the Ways can be confusing at first as some refer to “this” – and this refers to the Action card played from your hand, not the Way card.  But, you only need to wrap your head around it once and then it makes perfect sense.

The cards seem to work well with each other, and they should fit in fine with the previous expansions.  My guess is that you can mix and match these cards fairly easily – you do not seem to need a critical mass of Menagerie cards to generate combos; most of the cards in this set seem to work well with the general themes and ideas in the previous sets.   The Ways and Events cards are generally limited to one in each game, so you clearly don’t need to have multiples of them for those cards to work – and the Horse cards don’t necessarily need multiple Action cards that deal with them; like Curses, they are fine with just one card that employs them.

I’ve enjoyed my initial forays into Menagerie, and I think that the Ways and Events are something that I would try to add to any future game of Dominion.  I really like how these two types of cards can really change how you play a particular hand, and they also help give new options, especially when you get a bad draw.  If you don’t want to use them, you’re free to ignore them, but they can be a lifesaver in the right situation.