June 2020. Not sure in the long run if it’s really a month to remember,  but there was some gaming involved. We started to have some normalcy around, even hosted a game night with three others invited. That’s really the first gaming that I’ve done outside of my family and one friend since March. We had some fun with online games as well as I embraced Board Game Arena a bit more, you’ll see a bit of why in the coming days. Total plays for June were pretty nice, 54 plays of 24 different games. Of those 24 games, I only learned 5 new ones. One of my goals for 2020 was to learn fewer new games, but I had no idea that it was going to be this way. Last year, I learned 162 new games, as we can tell, I’m not even approaching that number this year at the halfway point. It’s a good thing, and a bad thing. Good in that I am achieving a goal and enjoying games that I have learned previously over the years, a lot of favorites. Bad in that, I haven’t really had a choice over the past three months. Now, I wish I could have been playing like we were, but it’s a new time. 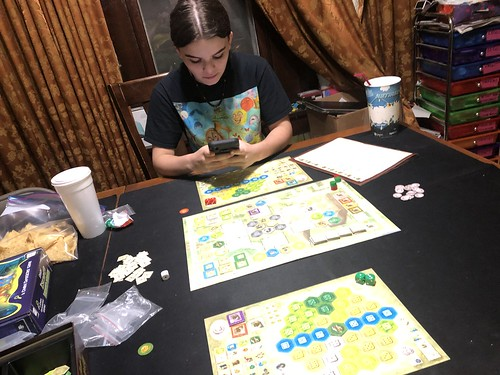 Online play has boosted the number of plays of Castles of Burgundy over the years. So much so that it will be the first game that I have played, since I started logging plays, that will reach one hundred plays. We got to 99 plays after a long night of gaming with my oldest daughter, who granted me one game to teach her, everything else had to be games that she already knew. So with that, I broke out Castles of Burgundy and taught it at 1 am on Father’s Day. It took her a bit to get accustomed to the game, what with all the buildings that do different things, but once she took to it, we were off and running, playing our first two player game in about an hour, with my experience paying off. The moral of this all was that she greatly enjoyed it. I think that Herr Feld kind of peaked with the design of Castles of Burgundy. It’s a wonderful point salad of a game that is on one hand aggravating as it possibly can be because of dice, but also a wonderfully strategic game that makes you stay on your toes. I will never play this at more than three people on the table, the downtime and setup is just too much of a pain, but online it works wonderfully at the higher player count. Castles of Burgundy is also a game that desperately needs a better edition, a “Deluxified” one if you will. The newer edition, while nicer, still is confusing in play with the choice of art and color, and man it’d be nice if we could get some nicer tiles. I currently have a game going online of Castles of Burgundy, but I wonder if I can talk my daughter into a game before that one ends so that my 100th play can be face to face. 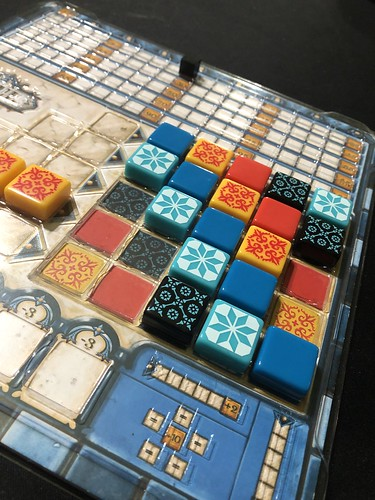 So, along with a game reaching 100 plays soon, I have another two games that reached 50 plays these past couple months, Carcassonne hit it in May, and in June, Azul reached a 50th play after it hit the table eight times this month. Once again, this is thanks to my oldest daughter who became a bit obsessed with chasing her highest score, which she managed to break on our seventh play this month. She managed to hit 111. In the midst of that chase though she allowed me a game where I managed to hit 110 and it only went the five rounds, hers took six. Azul is such a wonderfully designed, interactive game. You desperately have to be paying attention to what your opponents are doing in order to best position yourself in the draft. It’s no secret that Azul is a favorite of mine, but it had sort of seen a lull in plays until recently. The expansion, Crystal Mosaic, landed and we played those boards a couple times, but they really just pushed us back to playing the base game more. The plastic overlays are good for the tiles, but the scoring marker still can easily be bumped around, so kinda useless there. 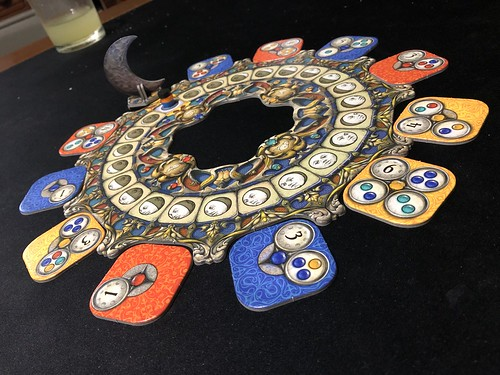 The more I play Nova Luna and the more I think about Nova Luna, the more I think it probably deserves the SdJ this year. Do I still prefer Habitats? Yes, I think I do, but Nova Luna is a wonderful family game built around that scoring system from Habitats. It can suffer a bit at the max player count due to a loss of control and some horrific downtime, but at 2 and 3 players I think Nova Luna is about as solid as games got last year. Uwe and Corne definitely deserve some recognition for this wonderful collaboration. The game is basically a race to deplete your supply of markers. You do this by building tiles in a display in front of you in a way that fulfills the requirements on other tiles. If you manage to do so, place a marker covering that requirement and you are one step closer to winning. The selection of tiles is done in that Patchwork style, where you can select from the three tiles immediately in front of your marker. After selecting you move forward the noted number of spots, aka time. The person furthest in the back always goes first. This is what can create the loss of control and downtime issues. There are definitely going to be some tiles that will work better for you than others, and to get those, you may have to jump ahead on the time track quite a bit, which will allow the players behind to pick up tiles before you ever get a turn again. Possibly depleting the display. Habitats doesn’t have that, the display is constantly refreshed there and there is a static turn order. So for that reason I prefer Habitats at the higher player counts. Anyway, l am definitely looking forward to more plays of Nova Luna and we’ll see in a couple weeks whether it brings home the most coveted award in board gaming.

I am hoping that July is far more active for me on the site. I’ve got one review ready to go up on Monday, July 6th for Scooby-Doo! Escape from the Haunted Mansion, and I am working on a review of the competitive tea serving game, Chai. I have a game night scheduled next week that brings hopefully another play of Ride the Rails so I can review that one, and maybe some Raiders of the North Sea, I cannot believe no one has reviewed that one on The OG. Stay safe friends, remember to social distance, and wear a mask when social distancing is not an option.