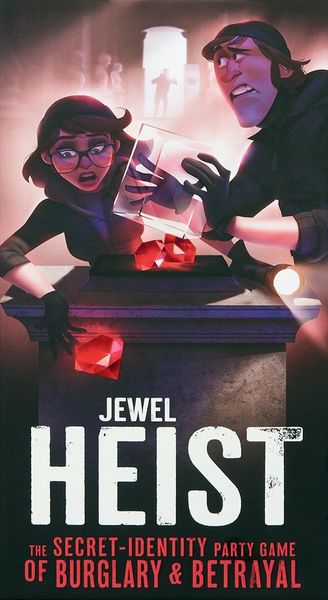 Well, 2 days before Ohio told everyone to stay at home, I got a review copy of Jewel Heist in the mail.  I was planning on trying to get both of my local game groups to come together to have one last big game night; but as it turns out, we ran out of time and it never happened.  Now, the thought of being able to have enough people in one place to play a 5-8 player game kinda makes my skin itch.  But, at some point, we’re gonna get back to normal, and I’m sure that many people will be looking for big party games, and this one could fit the bill.

In this game, the players are randomly split into two teams – the Robbers and the Detectives.  Cards are dealt out secretly to determine which team you’re on.  This information remains a secret until the end of the game.  The number of robbers and detectives is outlined in a chart in the rules.

Once everyone knows their role, the jewel case is set up.  There is an inner white platform, on which 13 jewels are placed (well in a 7 or 8p game… in a 5p game, there are only 9 jewels).  There isn’t enough space for them all to lay flat, so just balance them on the platform and then cover it with the clear outer piece.  The outer cover has two platforms at the bottom, each of which has a marble placed on it.

The game is then played over a number of rounds – night first and then day – until someone has been given two warrants.  In the night phase, all the players close their eyes and then everyone starts counting together, backwards from fifteen.  Once the countdown has started, the robbers are then allowed to open their eyes and they attempt to steal jewels.  The Detectives must keep their eyes closed and can only listen to what is going on.

The Robbers must remove the vault cover, trying not to dislodge the marbles.  Once the cover is off, each Robber can take one jewel, which they then hide somewhere on or underneath their body.  The rules suggest putting it in your pocket, in your shoe or perhaps sitting on it.  The Robbers can also redistribute their jewels amongst each other in this phase.  Finally, before the countdown is finished, the Robbers must replace the vault cover, and they may replace any marbles which have fallen off the cover.  They should remember to close their eyes as well or else they’ll look pretty suspicious when everyone opens their eyes at the end of the counting!

If the Robbers were not able to steal a single jewel, place a Warrant on the Robbers hideout marker.  If the Hideout gets two Warrants placed on it, the Robbers automatically lose! 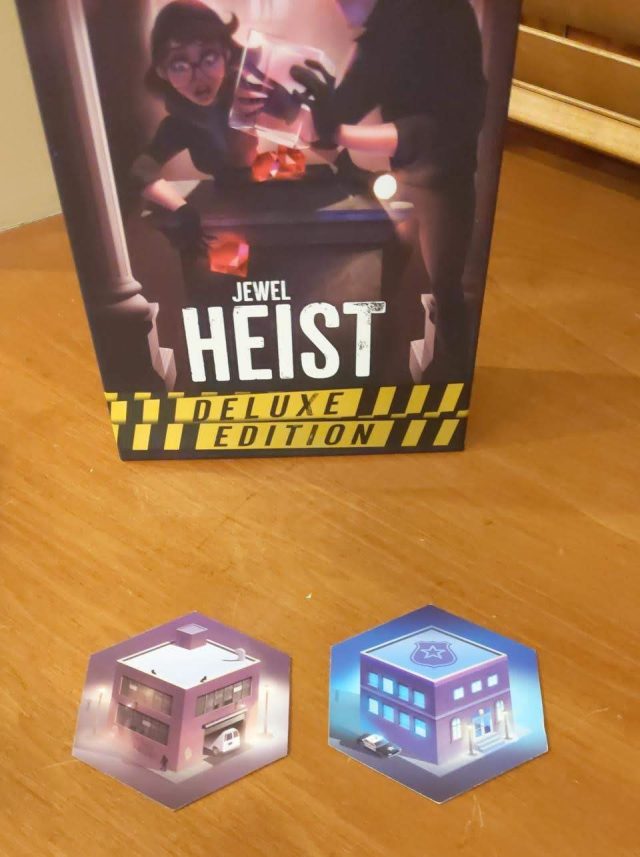 Then, the game moves into the day phase.  First, check and see if the alarm was sounded – that is, if there is a jewel on the table or a marble not in the right place on the cover.  If so, a jewel is placed on the Police Station tile.  This can come from the table, and if one isn’t available, remove the cover and take one from the vault.

Next, all players now have a discussion about what they hear.  The Detectives are trying to figure out who the Robbers are, and they should describe what they heard, and let others know of their suspicions.  The Robbers also get to participate in the discussion, and they should say misleading statement, and perhaps try to accuse one of the detectives as being guilty.  Once the talking is done (and maybe you’ll have to set a time-limit, who knows?!), all players put a finger up in the air, everyone counts down from 3, and then all players point to the player they accuse this round.  The player with the most fingers pointing at them gets a warrant.  IF there is a tie for most, all tied players get a warrant.

The game ends when at least one player has two warrants – that player is arrested.  If this isn’t triggered, play another day… If the game ends, all players now reveal their role cards….

If a detective was the arrested player – the Robbers place all their stolen jewels in the hideout.  The police station gets nothing extra

If a Robber was the arrested player – that arrested Robber puts any jewels he currently has on the Police Station.  IN addition, all remaining jewels in the vault are placed in the police station.  All other robbers place the stolen jewels that they have on the Hideout.

There are some other instructions for edge cases, but you can refer to the rules if/when you need them.

The team that has the most jewels on their base tile wins!

(end of the part written in June)

Since June, I have received a copy of the new Amazon-exlcusive Deluxe edition which has a few more components – a deck of 8 extra action cards.  There is a chart that tells you which action cards to include based on player count – as well as a super-expert suggestion of just shuffling the 8 cards together and dealing them out randomly! 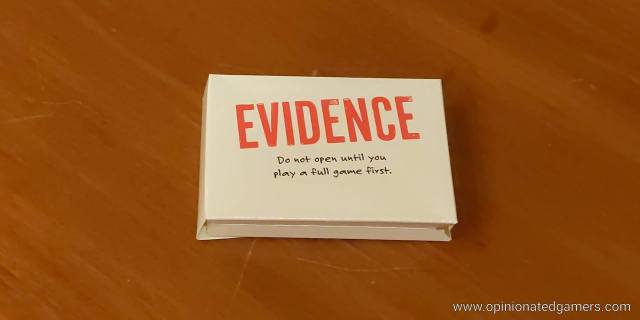 The Action cards are dealt out face up, one per player.  They remain face up until they are used, at which point they are flipped over and can not be used again.  Action cards can only be used in the Day Phase.  The actions are:

The game is a decent twist on the usual sort of Social Deduction that I honestly am not a fan of.  Here, you still have the whole hidden role/negotiation/lying/collaborating mechanisms but there is the added element of the physical/dexterity which makes it more interesting to me.  Unlike Werewolf and its ilk, Jewel Heist adds a bit of actual sense detection to the game, and for me, that makes it much more palatable…

I did get a chance to play a quick game in the hospital lounge, and I was surprised by how much bluffing and arguing that went on between the non-gamers that I managed to talk into trying it.  We were in a noisy room with plenty of other conversations going on, but there were still plenty of audible clues that helped us try to pinpoint the Robbers.  I was a Detective in that game, so I spent most of the time with my eyes closed <g>.  One other interesting thing that I noticed in this first game was – some of the Robbers stopped counting at times because they were concentrating so hard on removing the cover… and that was a dead giveaway!

We ran out of time, so I have set up the game at home by myself and tried to steal things… and I’ll be honest – counting down from 15 doesn’t really give you a lot of time to take off the cover, carefully grab jewels and replace the cover. In my practice runs, I’ve really come to find out that my joints are creaky and crackly, and that would probably give me away.  I’ll have to figure out how to move silently in order to be a good thief…

I would think that the game would need a round table, or at least one where all players have an easy route to the vault.  That being said, if it is too small, the detectives might be able to easily sense the movement of the robbers as they moved to take a jewel.  You might be able to feel your neighbor’s leg move or chair brush yours as they try to get the cover off the stand…

The components are quite nice.  The plastic vault and cover are nicely done; the pieces fit together snugly, and the tracks for the marbles are just enough to allow you to move the cover carefully without losing the marbles.  The game comes in a compact box with a nice custom vac-tray; and there is even a slot in the tray where you can put your camera in case you want to record your heists!

Mattel continues to not use shrink wrap, and I like the little flair they used- instead of using the normal clear circle stickers, they used red tape that looks like Evidence tape – a nice touch!

It remains to be seen (for me, at least) whether the physical/dexterity component of the night phase will be enough to overcome the social deduction component of the day phase; but right now, I’m seriously looking forward to a chance to play Jewel Heist with 4 to 7 of my closest friends!  My test game proved to me that there is more to the game that I first thought, and I’d like a better set of circumstances to really try out the game.  I also would like to try out the more advanced Actions with true gamers.  There is no way that I could rate the game yet as I feel like I haven’t had enough experience with it to really know what I think.  FWIW, one of the non-gamers in my hospital group liked it enough that she asked me for my original version of the game (since I had both the original and the deluxe Amazon only version)…

Steph Hodge: (2 plays) – Totally enjoyable! Took me by surprise since I am usually not a fan of bluffing games. I suppose when you add in dexterity it makes the game hilarious and entertaining. Super quick playtime at 15 minutes tops. Downside is that you need 5+ players to really be a fun game.