Ctrl is a pastel colored abstract area control game – all fought over a black central cube.  The game starts with a 3×3×3 cube that has one block of each player color stuck into one of the cube’s holes. Each player has a matching colored flag that sticks out of their block. The rules have some 2D diagrams/photos to show you where to put them…  In a two-player game, each player controls two colors, but at the start of play they secretly choose one of those colors to be their scoring color, with the other color serving only as a blocking mechanism.  Each player gets a card to remind them of their color and takes the rest of the blocks in their color – there should be 21 of these.  The starting cube, and all other cubes attached to it, form the Battlefield.  The Battlefield can be freely rotated on the table, but it can never be lifted from the table (i.e. the bottom of the cube always remains the bottom, and nothing can ever be attached to the bottom). 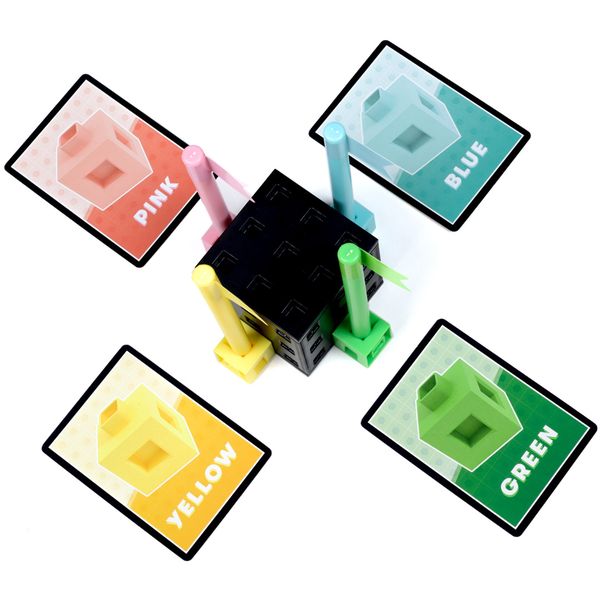 Starting with the starting player and going around the table, each player takes their turn – always doing the same 3 steps in order.

2] Place 3 blocks – the first block you place must be orthogonally adjacent to a previously played block of your color. The other two blocks must travel in a straight path, and they must stick to the surface of the battlefield – that is, they may not extend away from the battlefield surface more than they have to.  If your path reaches an edge, the next block is placed as if your path rolled 90 degrees around the edge.  If you come to a wall, the path grows up the wall.  Your path may end adjacent to the table, but you must be able to place all three blocks in your path.  You cannot place blocks if obstructed by an opponent’s flag.

3] Replace your flag on any exposed face in your Domain.  The flag may not point down (towards the table).

The next player then takes their turn.  After all players have had 7 turns, all 22 blocks of each color will be on the Battlefield.  Then, each of the 5 visible faces is scored (the 4 sides and the top).  Looking at the side directly, count the number of faces seen in each color.  Note that a flag blocks any faces from being seen underneath. Sum up the faces seen on all the sides, and the player with the most visible sides wins!  Ties go to the player whose flag extends upwards the furthest from the table.

Well, I was pretty interested in this game from the first time that I saw pictures of it.  I am fairly fond of abstract games, and this one is a looker.  The pastel colors, while not my first choice, generate a striking 3D sculpture as the game progresses and it is definitely something that will make people stop by your table and ask what you’re playing.

The rules are really easy to learn; it only takes a few examples at the start of the game to get everyone on board and ready to play.   There are only a few things to remember about path placement, and I have found that a simple hands on explanation makes it easy.

At first, it may seem like there is a first player disadvantage, but after a few plays, I actually think that things are balanced out.  Sure, it seems like going last in order is great because you are “guaranteed” to get at least 3 points out of that turn because no one can place blocks after you.  While that is true, I have also seen that clever flag placements can really obstruct your ability to place blocks in good spaces OR force you to place your blocks in a way that covers up your own color – thus not really gaining any points for those placements.  Anyways, it’s a 15 minute game.  IF you’re really that concerned about it, play the game multiple times, reverse the player order and just sum the scores!

The 2p version of the game is also interesting, and thanks to coronavirus, I’ve been forced to play the game mostly 2p.  Each player gets 2 color cards, and play alternates between the players.  Around here, we’ve made a house rule so that one player gets blue and yellow while the other gets pink and green… Why?  Because, then you can use the order of the colors on the scoresheet to remind you of which color is currently playing.  In the 2p game, play alternates between players, and at the beginning of the game, each player designates one of their colors as their scoring color – by keeping the player card of that color in front of them (discarding the other one).  At the end of the game, each player only scores the color that they kept.  This system allows you to use the other color as a bluff or as an obstruction maker – and it creates a pretty interesting tactical game.  Unlike a lot of 2p games that I’ve played during the coronavirus epidemic, this version might actually be a little bit better/interesting than the “full” multiplayer version.

For those looking for a nice eye-catching, quick playing abstract game, this one would be a good choice.  The components are nice and sturdy, and the easy level of rules makes this playable for even young children.

Steph Hodge: An abstract game that needs the right crowd to enjoy. Fun puzzle to figure out and the added simple joy of putting blocks together. Really impressed!